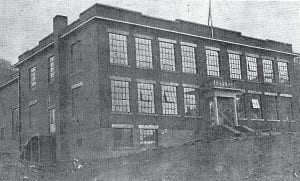 Excavation for a new grade school building in Whitesburg began in March 1927.

The WHS baseball team won, 19 to 8, in the encounter with Stuart Robinson Saturday in the Lewis Bottom. The local boys held the visitors scoreless for five innings.

School is assured of new gymnasium for next season

The WHS School Board has pledged itself to the boys and girls to provide a gymnasium by the time school opens next fall, and this pledge will be fulfilled, members of the board say.

Plans have not yet been completed, but they are under consideration. The county board of education has expressed itself as being willing to co-operate in this work for it will be more than a mere city proposition. School children from all over the county will benefit by it. 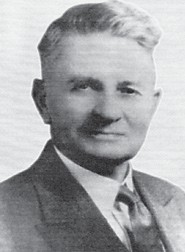 WHS is accredited. This means that any graduate from this school will be allowed to enter the University of Kentucky or any other standard college without being required to take an entrance examination.

Professor H. H. Harris, Superintendent of the Whitesburg graded and high schools, has tendered his resignation to the Board of Trustees, it became known here yesterday. Prof. Harris took charge of the schools of this place eight years ago, and under his care there has been a steady and satisfactory growth, both in size and professional spirit, of the schools of this city.

Prof. Harris did not make known his reasons for tendering his resignation, except to say that he has been here long enough for such a step to be in order.

He has nothing but the best of feelings for the school and the city, and the greatest interest in future growth and development of all, he says. He did not disclose what his plans were for the future, except to say that he had six weeks of thoroughly enjoyable work to do in completing the present school year in this city.

When Professor Harris came to Whitesburg there were perhaps a dozen students in high school. Organization was far from perfect and the community spirit for education had not yet been thoroughly awakened.

From a scant dozen, the high school has grown, until at present there are 160 pupils enrolled. The community is awake to the responsibilities and opportunities of schoolwork, and prospects are better for educational development than ever before. Professor Harris has been a great factor in this development.

The superintendent’s talented wife and daughters have added much in the work that has been done at this place, for they have always been ready to enter any enterprise for the advancement of the community.

Excavation in preparation for the building of the new schoolhouse for the grades in Whitesburg was begun this week. One hundred twenty working days are allowed for completion of this job.

The contract was let to T.S. Shepherd and Company, local contractors, early in March. This was the building alone. The heating and plumbing work is to be done by the Whitesburg Plumbing Company.

The building will call for the expenditure of at least $25,000 and will have six classrooms, basement and large auditorium. The architect’s plans show it to be a modern, attractive school structure.

The play, “The Girls of 1876,” given by the girls’ division of the Caesar Class on Tuesday evening of this week was a high-class performance.

There was a large and appreciative audience. Admission was 10 cents for everybody, and the door receipts amounted to $20.10. The play was a thrilling story of colonial and revolutionary days.

Miss Hazel Fields, a true subject of the king, depicted the character of a proud and haughty loyal English woman. Her two daughters, Misses Nassarita Hays and Mabel Blair, played their parts in the same manner as their mother. Misses Evelyn Back, who had the leading role and Viola Combs were on the side of the Colonists, and took many desperate chances to aid Colonel Washington.

The character of the little French Canadian maid was portrayed to perfection by Miss Rosa Hale, who was taking care of the old grandmother, as played by Miss Myrtle Hammock.

The minor characters played their parts equally as well in proportion to their importance as the major characters. The little slaves gave a happy air and created laughter every time they came on stage.

A minuet of the days of ‘ 76 was one of the main features of the play. Every character was well chosen and seemed especially fitted to his part. The play was directed by Mrs. Harris.

Prof. Adams conducted opening exercises Tuesday and gave a short lecture on the opportunities that Whitesburg presents to the school children. It was interesting and helpful.

Prof. Glenn had charge of the stage Thursday and outlined the prospects for athletics and encouraged the pupils in the work. Good talk.

Prof. Hale conducted chapel Monday. He said, “ You children will each have one chance in 500,000 to be President of the United States.” He said, “If I throw a pencil to a class of 50 each would have one chance in 50 to get the pencil; If I throw 50 pencils you each would have an equal chance to get one.” He showed that we all have a chance to get a good position if we are worthy of it and want it. He urged the pupils to improve their opportunities and showed them that all can become good citizens.

Mi ss Dalna Hay s brought her children to chapel, Friday. They would come every day but the auditorium is too small for the entire school. Five hundred twenty have been enrolled. Of this number 150 are in high school and about 50 at the Caudill School.

Last Friday the Literary Societies had the best program yet. Prof. Glenn’s solo, the boys’ quartet, Miss Grace Harris’s story, quotations by the sophomores, and a debate, Walter Enlow on Current Events, song by Wilma Back, Orell Fields’s original story were among the best.

(The above article from the September 1926 Mountain Eagle.)

The WHS basketball team suffered its first defeat Saturday, when it met the Buckhorn team and the Hazard High team. Both games were played under handicaps, and at least one would have been a victory under different circumstances.

The score of the Witherspoon College game was 16 to 14. The local boys walked from Altro to Buckhorn and played the game Saturday morning. The strain was too much, and they went down in defeat, after having put up a game fight.

The game was played by Cova Baker and Salyer as guards. Hall, the running guard, was not on the Buckhorn trip but joined the squad in Hazard.

Hogg, a senior, played the leading game of this contest. Asbury Johnson was referee. The boys were well received by the Witherspoon College and enjoyed their stay while there. A return game will be played here Jan. 21 and our boys should have little trouble in winning this contest.

Hazard Game: The Whitesburg boys walked back from Buckhorn to Altro Saturday and played the Hazard Bulldogs that night. This game was 26 to 11 in favor of Hazard. Cecil Baker was high point man for Whitesburg, looping five. Cova Baker and Hogg played forwards, Cecil Baker center, and Hall and Salyer guards.

The next game for the Whitesburg High is with McRoberts here Saturday night. Boys’ game only. The game will be called promptly at 7 p.m. Coach Marvin Glenn’s boys are working hard for this meeting, and it should be well worth seeing. The boys are determined to bring their winning average up again.