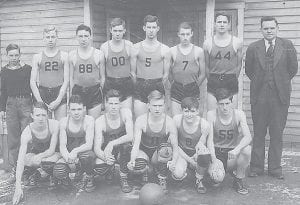 For WHS the commencement season for the school year 1937- 38 is now approaching. Since this is the largest class that has ever graduated from the WHS we are hoping to have one of the nicest commencements that has ever been held. In order that the parents may have time to make arrangements to attend these exercises the following schedule is herein given.

The only charge for any of the above programs will be for the class play on Thursday night. The commencement speaker will be Lieut. Gov. Keen Johnson, and I am sure all will want to hear him.

The junior class with the aid of its sponsors, Miss Webb, Miss Cook and Mr. Montgomery, gave the senior class and faculty members of Whitesburg High School a delicious banquet in the social room of the Presbyterian Church Saturday night, May 14.

Place cards were laid for one hundred and thirty, who attended and were all finally located when the fun began. The tables were decorated in the high school colors, which added materially to the well-planned banquet.

The toastmaster, William Fred Gibson, was at his best in introducing the speakers. Bill Kincer made the welcoming address for the junior class and Verdell Bach, president of the senior class, responded.

After an evening spent in merriment, “Auld Lang Syne” was sung by all, and the banquet was over.

The banquet was prepared and served by the Woman’s Auxiliary of the church.

Commencement exercises were held Friday night at the high school for the largest class of seniors to ever graduate from WHS. Sixty-nine students completed their high school studies at this time.

The Baccalaureate services were held at the Baptist Church last Sunday at which Rev. L. O. Griffith delivered the message to the class and a large congregation.

Lieutenant Governor Keen Johnson will deliver the commencement address on the program which was arranged by Prof. R. Dean Squires.

The audience appreciated the talent and training shown by the students. A violin solo was played by Steve Bowen, accompanied by his sister Stella Fae.

The 56th District Tournament was played in the Whitesburg Gym, Thursday, Friday and Saturday nights, March 3, 4, and 5. Thursday night, Jenkins played Kingdom Come. Jenkins won 43-15. At 7:30, Fleming played Eolia, Fleming winning 35-15. Whitesburg played Jenkins and won in a close game, by the score of 20-19. Fleming played Stuart Robinson, winning by a score of 22-18. These two close and exciting games were attended by the largest crowds that have ever attended any ball game in the Whitesburg Gymnasium.

Saturday night at 7:30, Whitesburg played Fleming and won with a score of 38-23. Mayor Bill Collins presented trophies to All-County players. They were as follows: Bill Kincer, Ted Cook and Audrey Pigman from WHS; Milton Ticco from Jenkins High School; Harold Jenkins and Dee Conley from Fleming; Parsons from Eolia; and McIntyre from Stuart Robinson.

(The above article from the March 1938 Mountain Eagle.)

Tuesday night, March 22, one hundred and one people attended the WHS basketball banquet at the Presbyterian Church.

The basketball boys were each given the privilege of inviting a high school girl to accompany them, and they were also escorted by some ardent basketball supporter, their meal being paid by him.

The banquet came to a close by singing of “Auld Lang Syne”, each guest departed expressing what a happy occasion it had been and this recorded another memory in the history of Whitesburg High School.