Coldiron and Hunsucker All Conference

Two WHS seniors were honored by the Eastern Kentucky Mountain Conference as first team All-Conference selections. Ralph Coldiron was named on the offensive unit as a guard and Joe Hunsucker was selected as a defensive back.

Ralph, who was a captain, stands 6’- 3” and weighs 200 lbs. He pulled from his guard position to lead end sweeps as well as fine straight ahead blocking. Although plagued by injuries, he played in each of the team’s ten games.

Joe was also a captain and second leading tackler. A versatile performer, he played safety, halfback, and linebacker. Joe led in tackles until the final game of the season when an injury greatly hampered his effectiveness. In addition to being a defensive standout, Joe led WHS rushers with 534 yards.

Both boys are a credit to the school and fully deserve the honor placed upon them. 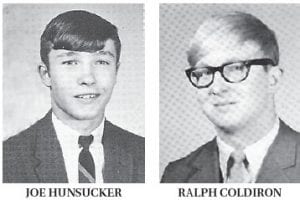 The French Club met Thursday, Dec. 5. The members drew names for secret Christmas pals. Mrs. Banks, the sponsor, announced that all students planning to go to Europe this summer were to watch the special on Michelangelo on the NBC television network Thursday night. They were then asked to write a report on the program.

A Tri-Hi-Y Banquet is planned

On Dec. 12, the Tri-Hi-Y held its third meeting of the year. Old members offi cially welcomed the new members into the club. Plans were discussed for a mother-daughter banquet in January.

The annual Distributive Education Employer- Employee Banquet was held Saturday night, April 26, at 7:30 in the Whitesburg High School Cafeteria. Approximately 50 guests enjoyed the ham dinner prepared by Mrs. Doris Collins and the cooking staff. The guest speaker was Mr. Robert Talbott, assistant director of D.E. from Frankfort. Mr. Talbott stressed the importance of student, employer and director co-operation and also how D.E. workers are a value to the community. Certificates of appreciation were presented to the employers. Special thanks go to Stallard Florist for the lovely flower arrangements. 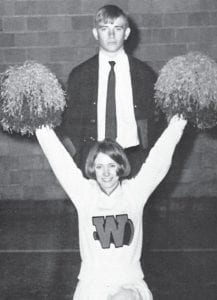 When the junior class issued prom invitations to each teacher, they didn’t expect the replies to be any different from those of preceding years. However, they were quite surprised when they received the following poem from one of the teachers and his wife:

‘Attending the prom for some people is fine,/but I’m afraid the invitation we must decline. Loud music and amplifiers are certainly the rage./But after all we must think of our age!/That we’re getting old we really agree/For dancing’s just not what it used to be./We used to think we were quite hep!/ But it takes a big person to admit he’s out of step./ Between us and the students,/ there’s a generation gap./On prom night we’ll be home taking a nap.’ The Ed Moores. 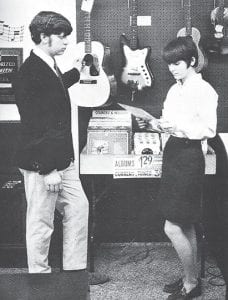 The WHS Future Business Leaders of America left Friday morning, April 25, at 4:30 a.m. going to Lexington for a tour of business companies.

The club arrived at 9 a. m. and began touring IBM, University of Kentucky Medical Center, and Kentucky Central Life Insurance Company. After a busy schedule, the club was ready to rest at the Ranch Motel on Winchester Road, but not for long. The club then went to the mall where they shopped, rode rides, and had a great time until 12:30 p.m.

Saturday morning the group got up at 7:45 a.m., and headed for Fugazzi Business College and a tour of Henry Clay’s home. After a busy day the members were ready for home. They started at 1 p.m., and arrived here at 5 p.m. 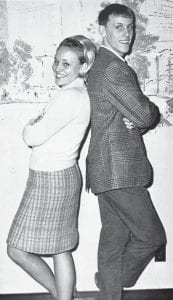 Never again will these boys be able to walk on the WHS field or floor and hear the crowd yelling for them. It’s all over except the memories we have.

And so, seniors, whether you play football, baseball, or basketball, the Black Kat, and all of WHS bids you a fond farewell.