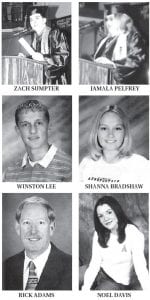 On June 6, the 2003 graduation class of WHS filed into the gymnasium for the last time. As the service began, anxious faces of the future graduates respectfully and attentively listened and watched as the final chapter of their high school career came to a close. Now as a new chapter begins, a blank page faces each graduate, waiting to be filled with their hopes, dreams and successes. The guest speaker for the evening was Dr. Van Breeding from MCHC. The Valedictorian was Zach Sumpter and the Salutatorian was Jamala Pelfrey.

Mr. Rick Adams has been an integral part of our community and school. Since graduating from Morehead State University in 1975, he immediately began working and serving students by teaching fifth grade history and science. While teaching full-time, he also held down jobs with the A&P Tea Company and Beth-Elkhorn Corporation.

Coming from a long line of educators, both his father, Richard, and mother, Pauline, taught in the Letcher County School System for a combined total of nearly 80 years. It would seem as if education and helping students has always been an important role in his life.

Mr. Adams has served Letcher County well over the past 28 years. Athletic director, coach, teacher, mentor and friend — these are just a few of the accolades that he has worked to earn during his career.

We would like to take this opportunity to thank you for your continued service and dedication toward the betterment of all those lives you enrich and enlighten.

The Harris Award is named in honor of Professor H.H. Harris, who served as Principal of Whitesburg High School from 1919 until 1927. It is awarded by the faculty to a senior boy on the basis of leadership, character, and scholastic standing. This year’s recipient is Winston Lee.

The Dugan Award is an award named in honor of Miss Ann Dugan, who served as the Home Economics teacher for 27 years at WHS. The award was first presented in 1966 and is awarded by the faculty to a senior girl on the basis of character, scholastic standing and leadership ability. This year’s recipient is Shanna Bradshaw.

Noel Davis has been selected as Miss Yellowjacket for the 2002-2003 year. Noel is the daughter of Mr. Weldon Davis and Ms. Ann Davis. During her four years at WHS, she has been an outstanding member of the student body. She has participated in many clubs, organizations, and athletic programs available to students.

Noel was also a member of the girls’ varsity cheerleading squad for one year and participated in class tournaments for four years.