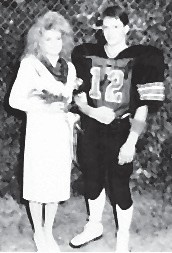 As the night came to an end, the crowd was impatiently waiting to see who our 1987 Queen, Miss Tracy Combs escorted by Derek Collins, would be handing the crown down to. As the suspense grew greater the queen was announced. Miss Georgia Mullins! It was a very special night for Miss Mullins and her friends.

Mrs. Susan Hayes is the new music teacher and band director. She graduated from Jenkins High School, where she was a member of the band and also a majorette. While in the band, she played the clarinet and the piano. After high school, she attended E.K.U. but later received her degree in music from Pikeville College.

Mrs. Hayes lives in Whitesburg with her husband, Haskew, and her two children, John and Sarah.

Mr. Jeff Hawkins is teaching drama and English. He graduated from Georgetown College in 1982 with a B.S. degree in business administration and communication. In 1988 he received a teaching certificate from Clinch Valley College in English and literature.

He first became interested in drama because of the writing. But as time went, on the more he became involved with everything else that goes into making theatre acting, directing, lighting, and props.

Mr. Hawkins is a Kentucky Artist in Education and Development Director for Roadside Theater.

Some of his previous jobs were storyteller, actor, director, college instructor, carpenter, block layer, teacher, and radio programmer. He also worked as an administrator for the Kentucky River District Health Department.

He is married to Cheryl Hawkins from Dayton, Ohio. Mrs. Hawkins is a teacher at Burdine Elementary. They have one son, Travers Cody Hawkins, who will be three years old in November.

Tom Searcy is our new drafting teacher and head football coach. He is a 1981 graduate of Morehead State University. He is married and his wife’s name is Kathi and his daughter is Heather. Coach Searcy began his coaching career at Madisonville North Hopkins where he was both assistant football and basketball coach. He then spent two years at Madisonville South Hopkins before coming to Whitesburg. He has set high goals for the ’88 football season and we wish him the best of luck.

Gary Gibson is one of the newest members of the faculty. Mr. Gibson, with his wife, Madeline, who is also a teacher, and his daughter, Lynn, are originally from Knott County and are presently living at Kite. He has a two-year degree from Alice Lloyd College, along with a bachelor’s degree from the University of Kentucky, and a master’s degree from Morehead State University. Before coming to Whitesburg, Mr. Gibson, who is also the new boys’ basketball coach, was the girls’ basketball coach for two years at Alice Lloyd College and a one-year coach of boys’ basketball at June Buchanan. Mr. Gibson says that he is really looking forward to the remainder of the year at WHS.

Mr. Laymon Decker is the new social studies teacher. He has been teaching for over 30 years. He has taught at many schools in Kentucky and Ohio. He attended Warren Wilson Jr. College in North Carolina, Union College, Eastern Kentucky University, and finished his graduate work at Morehead. Mr. Decker is married and has three children and four grandchildren.

Mr. Tony Sergent attended WHS and college at Morehead State University. He played four years of football at WHS and continued with five years at Morehead.

He is married to the former Annette Combs and they have one child; she is one month and one week old.

Whitesburg High was his first choice of schools and math is his favorite subject to teach. Mr. Sergent says he really enjoys teaching and coaching football at Whitesburg.

On Saturday evening, Aug. 13, the Whitesburg Yellowjackets opened the Grid-O-Rama with a 26-0 victory over Allen Central.

Charles Matthews got the first of his three touchdowns within the first minute of the game on a 29-yard carry. Joe Caudill added the extra point for a quick 7-0 lead. Sophomore Owen Gibson and senior Charles Matthews teamed up to score Whitesburg’s second touchdown of the evening, ending with a two-yard blast by Matthews. After a missed extra point by Caudill the score was 13-0 Jackets.

The defense again held Allen Central. On the third offensive series it was all Charles Matthews. On the first handoff he rushed for 40 yards bringing the ball to the six-yard line. Then Matthews scooted over the goal line with his third touchdown of the evening. Joe Caudill kicked the extra point for a 20-0 score. William Bledsoe scored Whitesburg’s fourth touchdown. Late in the final quarter, Coach Searcy had a chance to look at some of the younger players on the team.

Matthews led the rushing attack with 126 yards on 6 carries, William Bledsoe had 33 yards on 5 carries, Owen Gibson had 27 yards on 3 carries, and Joe Caudill had 12 yards on 2 carries to lead the Yellowjackets.

Delena Boggs was elected the 1988-89 Basketball Homecoming Queen. She is the daughter of Less and Carolyn Boggs of Whitesburg. She is escorted by William Bledsoe, a son of Pamela Brown of Partridge.

The Whitesburg Chapter of FHA attended Region 12’s Leadership Training Session at Hazard Community College, Sept. 17, 1988. The theme of the meeting was “Blast Off For Leadership.”

State 2nd Vice-President, Misty Halcomb showed a video on the “Power of One”. Misty’s speech was enthusiastic and very interesting to all FHA members. Slides of the National FHA meeting held in Cincinnati, Oh., were presented by Kim Mullins of Jenkins High School.

The highlight of the meeting was the guest speaker, Barbara Bailey. Mrs. Bailey is anchor woman for WKYT Channel 27 News. The topic of her presentation was setting different goals for oneself, and how to strive to achieve those goals no matter who tells you that you can’t do it.