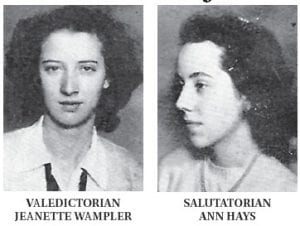 For the hundreds who have been benefitted by his life and teaching, for those boys and girls who caught an insight into a rich and beautiful life, for those who knew him and felt the fineness of his character, for the countless host who will come after him to be benefitted by the influence of his convictions of truth, right and morality, and who will catch a gleam of the beauty and grandeur of one whose life was unselfishly spent to advance and raise the standards of education in Letcher County, we gratefully dedicate this, the third volume of the Clarion, to the memory of Prof. E.B. Hale

Jeanette “Net” Wampler was named the Valedictorian of the Class of 1946. She was a member of the Home Ec. Club, the Pep Club, Book Club, Black Kat Staff and the Quill and Scroll Club.

Ann “Fannie” Hays is the Salutatorian. She is a member of the Pep Club, Book Club, Girls Reserve, Black Kat Staff and the Quill and Scroll Club.

Introduction of “The Clarion” Yearbook – 1946

Again the clear, crystal call of the Clarion is heard. Today, as never before is a challenge in it. It has in it a heroic note calling to duty everyone who is able and willing to do anything worthwhile. It is even more than a duty; it is a privilege to serve in some capacity, for it is not the cause of America, but the cause of every American individual.

I am particularly hopeful that, as WHS students venture into the realms of tomorrow, that each will ever keep alive within him that call of the Clarion. I know that this annual will be kept by many as a knowledge of days spent, but I trust it may also serve as an inspiration to every student to move onward and upward with the spirit and loyalty of WH. Miss Cleo Stamper.

We generously bequeath the following to the class of ’47: 1. Our quiet and dignified manner in which we enter and leave chapel, and our perfect attention while we are there. 2. Our seats in study hall and the auditorium which our predecessors have willed to us heretofore, and which we filled as satisfactory as they did. We hope you will keep this tradition going. 3. All of our workbooks that can aid you in your classes as long as you promise not let the teachers know of this inheritance. 4. At last but not least, we bequeath to the class of ’47 our vim, vigor, and vitality which has brought us safely through the four years of our high school life.

We bequeath the following to the various juniors and we hope they will treasure them. 1. To Virginia Hill, Jean Polly bequeaths her voice, which she attained by practicing six periods every day. 2. Ruby June generously leaves her most precious possession, her cackle, to Paula Flinchum, who she hopes will go through her senior year with her “cackling success.” 3. Charles Hall leaves his personality to just any junior who thinks he or she is capable of controlling it. 4. To Bill Fairchild, Billy Paul Frazier bequeaths his limp. P.S. Also his technique with the women, eh, R.J.A.? 5. After an awful fuss, Kathyrn Back finally agrees to leave her romantic disposition to the highest bidder, did you say something, Nellie Holbrook? 6. To Burtis Adams, J. B. Hall leaves his artistic ability. 7. To Herbert Caudill, Fernoy leaves his parking place not in front of L’s, but at dear ole WHS. 8. Rex Edminston leaves his treasurer tobaccos to Paul Polly and hopes he will have a “chewing” good time, during his senior year. 9. Imogene Collins leaves her “position” at the Kentucky Theater to Cleta Bentley who will, no doubt, have a friendly smile for all boys. 10. Erma Dean leaves her ability to “get the man she wants” to Dot Jenkins, who Erma feels need it more than she, as she already has her one and only. 11. Lelia June and Rachel Combs leave their combined height to Carol Combs. 12. Dimple and Keith leave to Georgetta and Herman the ‘lovers seat” in Journalism Class. 13. Harold Mason leaves his good looks and preaching ability to Ermel Ison, who has the prospects of filling this as well as Harold. 14. Edward Blair bequeaths his height and “slimness” to Joe Bert Gibson. 15. The intelligence and wisdom of Karu Ison is bequeathed to Ellis Maggard who we hope will make good use of it. 16. O. P. Hart willingly leaves his neatness and his “way” with the women to Glenn Polly, Thomas Fugate, Jimmy Collins and Donald Wyatt. He has plenty for all, eh, Ermadean? 17. Owen Adams bequeaths to Jack Amburgey his “ undecent thoughts” as “ Texas” has more than enough for both of them. 18. Jeanette Wampler leaves her intelligence to Mary Lynn Lewis. 19. Feeling that Betty and Margie Slemp need their contribution more than any one else, Valma Collins and Delma Brown bequeath them their “ unconceited” ways. 20. Gwendelyn Adams leaves her refined ways to Patsy Ison hoping that “a hint to the wise is sufficient.” 21. David Blair unwillingly leaves to Bill Pigman, Arthur Combs, and Herbert H. Haynes his gift (or should I call it talent) of getting what he goes after. (Mostly women.) 22. As Jimmy Craft and Jack Banks are now in Uncle Sam’s Army, they are willing, I’m sure, to leave any gift they might have to Billy Easterling and Jack W. Frazier. 23. “Bad Eye” Franklin, Loretta Hall, and Mae Acuff, retaining only enough for their personal use leave their gift of gab to Emma C. Owens, Larue Kiser and Pauline Trent. 24. As the school year is nearly over and we are nearly through work, Thelma and Virginia Sergent leave to Hermia Cassel and Hazel Cornett their brains and their brawn. 25. Noticing that neatness plays an important role in “keeping your man”, Wilma Flinchum bequeaths this to Dallas June Craft. 26. Being among the prettiest in the class, Esther Hall and Betty Jo Whitson leave, after much persuasion, their hints on “Beautification of face and figure” to Margaret Bay, Ruth Hall and Pat Sexton. 27. Velda Kincer leaves her job as “manager of the Black Kat” to Erma Lee Goins, who will no doubt, fill the job satisfactorily. 28. Betty Jo Little says, “If I can’t take all my talent with me, I won’t go.” 29. As they will have no more use for them, Lavon Sparks and Joy Faye Webb leave their “squinty” eyes to Della and Maelean Caudill. 30. We all know Nina Jarrett is an excellent cook as she leaves this to Wilma Holbrook. 31. Earl Reed’s astonishing brain is left, with much regret, to Earl Webb. 32. As Phil Holston will not graduate this year due to absence, we leave him any bit of knowledge that will see him through his 1st semester of next year. 33. Ralph Whitson bequeaths to Monroe Breeding the hint that “A is for absence.” 34. Alice Hale and Gaynell Blair bequeath their studious ways to Jean and Sybill Bates. 35. Rachel Combs leaves her appeal, to the opposite sex, to Mary, Vernice, and Virginia Caudill. 36. To Gaynell Collins and Anna Lea Sturgill, Wilma Day, and Anita White leave their “most sought after personality.” 37. Lavine Fields and Dennis Craft leave to Willis Lee Hogg and Doug Williams their most promising possession, their smiles. 38. Ethel Standifer bequeaths to Lucile Taylor her “luncheon” date with W.L. Stallard, Jr. 39. Jo Nell Board and Wilma Williams offer willingly to loan a few of their credits to any Junior coming up short. 40. And last but not least, the class bequeath to Polly Jean Hogg and Rilla Vae Banks any little thing we have that they want. (Besides our sweaters).

(The above information from the 1946 WHS yearbook, “The Clarion”.)