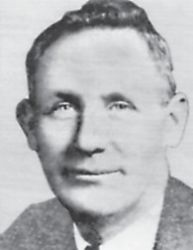 (1946) Keep dishonesty and crookedness out of our schools

Fathers and Mothers: There is a small group of local petty gamblers trying to produce dishonesty and crookedness in our schools. Unless the good citizens put their foot on it, they will succeed. All who are interested in promoting honesty and high morality in our schools should tell the members of the School Board what you want. These petty gamblers and dishonest individuals are repeatedly telling the Board what they want — Curtis Reed, Principal, Whitesburg High School

(Note: The above article appeared in The Mountain Eagle March 7, 1946)

The annual junior-senior banquet was a colorful array of pretty girls in lovely evening gowns and handsome boys in their best suits, a very attractively decorated banquet hall carrying out the Hawaiian theme with palms, orange and green crepe paper, hanging balloons, confetti, sprigs of rhododendron centered with flowers, and on the tables, dreamy canoes filled with nuts as a centerpiece on each table a larger canoe filled with tropical fruits. The favors were paper caps, programs, placecards, lei, and memory books, all of which were Hawaiian in theme. An orchestra composed of Mrs. Albert Jones, Leroy Fields and Lovell Williams furnished Hawaiian music throughout the evening. Hawaiian vocal numbers were given by Virginia Hill, Cleta Bentley, Margie and Betty Slemp, Carol Combs, Jean Polly, Betty Jo Little, Kathryn Back and Dorothy Jenkins. Welcome was given by Paula Flinchum, president of the junior class and the response by Ruby June Adams, senior class prophecy by Jean Polly and class will by Ann Hayes. Prof. C. J. Reed gave a tribute to the senior class. Benediction was given by Rev. Robinson. The banquet was served by the Auxiliary of the Presbyterian Church

The graduating class of 1946 at Whitesburg High School took a senior trip to Washington, D.C. and their teacher, W. L. Stallard, wrote this description of their trip when they returned. It appeared in The Mountain Eagle and is reprinted here:

On Thursday, April 25, 1946, the senior class of Whitesburg High School accompanied by Isaac Hogg, Miss Elline Salyer and W. I. Stallard left aboard a tristate bus driven by C. H. Jenkins of Big Stone Gap, Va., for a tour of Virginia and Washington, D.C.

At Big Stone Gap we saw the home of John Fox Jr., the author of “The Little Shepherd of Kingdom Come.” Crossing the bridge at Speers Ferry, we saw a fisherman land a large fish. Darkness came on us as we approached the great Shenandoah Valley; however on our return journey we saw it, enjoyed its beauty and were inspired by it.

All night long up the Shenandoah there was chatter chatter here, chatter there, and chatter chatter everywhere. Well, why not? A group of young people full of enthusiasm, pep and vigor, were enjoying the fruits of their labor. They had worked diligently and hard raising funds to finance the tour, so why shouldn’t they be happy? After midnight, a few, yes a very few, of us sought to snatch a little rest from Nappersville, and we did; but naps were few and of short duration.

Arriving in Leesburg, we registered at Leesburg Hotel, had breakfast, spruced and dolled up for the invasion of Washington. A few miles out of Leesburg, the entire group burst forth in song. As they sang “Where He Leads Me,” it seems to me that the Holy Spirit filled the whole bus. In tears of joy, I rejoiced in the spirit, and I’m certain there were others. The thought came to us, “Surely such classes of youngsters were an asset and an honor to Whitesburg High School.” Naturally during the four years we had squabbles, pouting periods, problems, and spats but those things quickly vanish when Understanding, Knowledge, and Wisdom appear.

Soon we were in Washington. Stopping near the center, we employed a guide. Randy was a good one too. At the Capitol Building, I was inspired when our guard through the building, a Mrs. Anderson, a Kentuckian, said, “This is YOUR Capital.” Looking down into the Senate Chamber from the balcony, I saw Emery L. Frazier sitting at his desk. What a thrill. I was prompted to holler, “Hello, Emery” then I remembered I wasn’t in Whitesburg. Only a few of the senators were present for the roll call. I didn’t see Stanfill or Barkley. I was thrilled and inspired at the statute of Will Rogers. To tell the whole story in detail would constitute a volume, and require too much space.

Five hundred fifty-five feet up in the air, we saw the most of the city from the Washington Monument. I could recognize most of the buildings from their pictures. In the Treasury Building, we saw the printing of money.

Approximately $35,000,000 is printed daily. It seemed strange indeed, realizing so little of it gets around to me. The Supreme Court Building, Smithsonian Institute, Army Medical Museum, National Collection of Fine Arts, Congressional Library, and Glenn Echo Park finished Friday’s sightseeing. The original copy of the Declaration of Independence and the Constitution under glass in the Congressional Library were interesting and inspiring.

Saturday morning and Randy was there early. After visiting the zoo, we were asked to pose for a picture in front of the Lincoln Memorial. From there we invaded Mt. Vernon, the home of George Washington. Mt. Vernon was an inspiration beyond measure. We took a peep into all of the buildings, even the Ice House. As I stood in silence at Washington’s Tomb, I wondered if he could come back to his home just for one day, would he approve the administration of Mt. Vernon. I don’t think he would. Would he approve of the collecting of approximately $400,000 each year from persons who come to his home? I was told this money is for the sole purpose of preserving and maintaining the estate. It is simply commercializing and grafting in the name of patriotism, and shielded with the glory and honor of the father of our country. What a pity O’Henry isn’t here to write again on “Shearing the Wolf “, and “The Gentle Grafter.”

Leaving Mt. Vernon, we returned to Washington by way of Airport and the Pentagon, the largest office building in the world. At Arlington Cemetery, we were told there were 54,700 graves. The most impressive scene of the whole trip was The Tomb of the Unknown Soldier. On his tomb were these words, “Unknown But to God.”

We parked in front of the White House and were told it had not been open to visitors the past four years. We sorter felt that if Truman had been there he might have invited us in on the lawn where Fala used to frolic, ha, ha, ha.

Leaving Hotel Embassy Sunday morning, we decided to pass over that section of the Shenandoah Valley we traveled during the night time. Where could there be more beautiful scenery than this famous historical valley?

At New Market, we toured the Endless Caverns. We missed the crowning of the Apple Queen by Admiral Nimitz, by minutes. The Queen was the daughter of Secretary Anderson of the Department of Agriculture. Five thousand, four hundred people witnessed the crowning.

I think it would be wonderful if Whitesburg High School could make such a trip to Washington an annual event. Each class could begin at the beginning of their junior year to make provisions for the trip. Rotarians, Lions, and others are always willing to help those who help themselves.

(This article was a reprint from an earlier issue of the Mt. Eagle and appeared in the Sept. 25, 1996 edition)

This week the Whitesburg High School received their new annual from the printers and it is really a beautiful record of the activities of the school and of the faculty and students throughout the year. The price of the annual is $2.00 and anyone desiring a copy may do so by seeing W. L. Stallard Sr. or any of the high school students. Mail orders will be accepted.