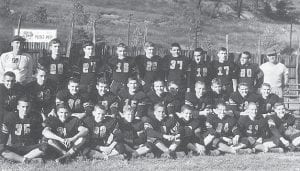 Yellowjackets dropped first gridiron meet to a seasoned Prestonsburg by a score of 27-7. A few costly bad breaks and a sharp black cat passing attack proved to be too much for the less experienced Whitesburg group.

Yellowjackets lose by one point

On Sept. 21, the Yellowjackets swarm met the Pikeville Panthers on their soil.

Fairchild and Tolliver carried the pigskin for the TD’s with Tolliver and Palumbo racking up the extra points while Phelps and Wheeler scored for the Panthers. The final outcome was a one point decision 20-19 with Pikeville on top.

On Sept. 28, the threetime defeated Yellowjackets met a favored Cumberland Redskin team on the Redskins’ soil. Soon after the game started the Yellowjackets proved to be a determined team. The fighting Jackets overpowered the Redskins 13-6, with Tolliver scoring the TD and Palumbo the extra point.

The Yellowjackets racked up another victory on Oct. 5 when the Jackets stung the Bulldogs by a margin of 12- 0. Palumbo, captain, scored on an end around and a pass from Tolliver.

Oct. 19, brought the fourth straight victory to the Yellowjackets as they routed a favored Jenkins team by a score of 14-6. Combs, the fullback, and Fairchild, the halfback, drove over for the TD’s, with Tolliver connecting with Palumbo on a pass and Polly, halfback, running over for the extra points.

Gay Banks and Nadeane Amburgey, winning representatives of the junior class, were crowned as King and Queen of the 1951 Hallowe’en Carnival at the Whitesburg Grade School Thursday night, Oct. 24.

Principal Millard Tolliver crowned the King and Queen in a “Land of the Rainbow” setting. Billy Wayne Wright and Janet Hall, first grade representatives, were dubbed Prince and Princess. Attendants to the King and Queen were Doug Roberts and Jan Combs, seniors; Yvonne Hall and Hershel Sanders, sophomores; and Bert Bach and Lois Mullins, freshmen.

Preceding the coronation, booths and concessions were open and a variety of shows were offered for the price of a dime. Lovell Williams and Bronston Clay entertained prior to the coronation on the piano and saxophone respectively.

Reception planned for juniors and seniors

The Whitesburg Jaycettes have extended an invitation to the juniors, seniors and teachers of those classes of the Whitesburg High School to attend a reception at the Quillen Building following the Junior-Senior Banquet Thursday, May 8.

Junior and senior class students, their escorts, dates and parents are invited to the reception, which will be chaperoned by the Jaycees and Jaycettes. An orchestra, composed of local talent, will be on hand to play for the occasion. No charge will be made for admission. The reception will be held on the ground floor of the Quillen Building, where the Whitesburg Bakery was previously located.

Campus Chatter by way of the Juke Box

‘I’m Waiting Just for You,’ Mary Combs to Jimmy Ray Adams; ‘Thinking of You,’ Betty Gail to Junior Croucher; ‘Too Young,’ Jimmie Bert to Shelia Moore;’ Pretty Eyed Baby,’ Ikey Hall to Joyce Kincer; ‘Come On to My House,’ Sue Auton to Eddie Collins; ‘Sweet Violets,’ Bobby Adams to Ella Louise Polly; ‘Near You,’ Katherine Auton to Doug Roberts; ‘Truly, Truly, Fair,’ Billy Ann to J. T. Caudill; ‘I Apologize,’ Ronald Craft to Drucilla Day; ‘Be My Love,’ J.B. Noble to Vina Jane Fugate; ‘ Be Doggone Sure You Call,’ Nadine Combs to Bobby Kincer; ‘Please Don’t Talk About Me When I’m Gone,’ Gail to Sadie Bentley; ‘I’ll Be Seeing You,’ Beryl Polly to Willia Bentley; ‘You Can’t Be True Dear,’ Bootsie Morgan to Bobby Combs; ‘So This Is Love,’ Herbert Caudill to Norma Jean Cornett.

Buddy Fields of the freshman class has been chosen Man On Campus by members of the Journalism Staff. Buddy has blue eyes, brown hair, and is 5’5” tall and weighs 130 pounds and is 14 years old. He is a member of our football team, goes out for basketball, is a Boy Scout and a member of the Presbyterian Church. His favorite food is milk; favorite song is ‘Come to My House’; his hobby is football. Girls, he isn’t hooked yet!

The belle on the WHS campus this month is freshman Anna Lois Mullins. She has blond hair, blue eyes, weighs 120 pounds and is 5 feet and 2 inches in height. Anna is 13 years old. Her favorite food is chocolate pie; favorite song is ‘ Too Young.’ Her hobby is reading and her favorite pastime is going to the movies. She prefers the masculine type of man and she hasn’t found him yet! So some of you tall, dark, and handsome boys get on the ball!

The Whitesburg School band had its first meeting on Sept. 6, and made its first public appearance at the Prestonsburg football game. This year the band looks promising both in concert and marching. Other appearances have been at the Pikeville game, a concert Saturday night, Sept. 29 in the auditorium. Look for the band to lead the parade at the county fair.

Ninety-six girls were accepted this year by Mrs. Tolliver to sing this year. This is the largest number of girls who have ever come out for the Glee Club. Mrs. Tolliver says, “The girls are wonderful and all love to sing.” First public appearance will be at the county fair.

Singing must be growing in popularity, for we have 42 boys in the Boys’ Chorus, and we are just waiting to hear them at the county fair.

Hoot Hall seems awful lonely this year. What’s wrong, gals, or should we ask Hoot? Sail, Harrison, sail, out upon the sea, only don’t forget to sail back to me, Carolyn.

Seems as if Jack H. and Anna C. B. are slipping apart, what’s wrong? Wonder why Marrylene Polly is a regular attendant at the drive-in every Sunday night? Could Billy Dean Sergent possibly answer this? Bronston Clay, why don’t you believe the fortune teller and trust us poor WHS girls? The Kat has been snooping and really didn’t find what it was looking for, so Glenda B. and Carroll S., let’s change our ways and have a big get- together. Bobby B., seems as if you are missing over the weekends. What’s Floyd County girls got that the WHS girls haven’t? Musicals

The month of December gave the parents and students opportunity to see how well the music students are progressing in piano and voice. Mrs. Tolliver and Mrs. Jones presented interesting musical programs. Mrs. Tolliver’s background was a party scene — the students wearing paper party hats performed for each other. Mrs. Jones’s decorations included a Christmas tree, Santa Claus and Mrs. Santa in their home. The performers were “dolls” wound up to play their numbers. Mr. Adams will present his students soon after Christmas.