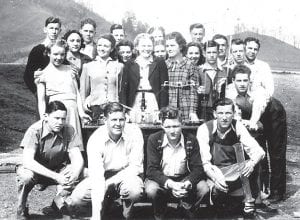 Thursday, Jan. 9, 1940, Mr. Montgomery and Miss Ann Dugan bewildered the faculty by exchanging classes. Mr. Hale was shocked and momentarily stunned when he opened the door of the Home Economics department and was confronted by the never-to-be forgotten scene of Miss Ann Dugan lecturing a whole class of future farmers while it is of course utterly impossible to imagine the advisor of the Whitesburg F. F. A. Chapter diligently instructing a class of comely home economic girls on the care of lawns, flower gardens, etc.

However, seriously, the boys and girls enjoyed the change of classes immensely. Miss Dugan instructed us on a very worthwhile subject, “Personality table manners and care and selection of clothing.” She also threw in a bit of advice to those lovelorn young gentlemen who may be considering dating home economics girls on the correct procedure to employ when going about this very ticklish task. Altogether I think the period well spent and believe it would be worthwhile if these changes could be affected more often.

We are continually hearing of the need for trained workers in the program of preparing this nation for defense against any possible attack. This places on the schools, more definitely than ever, the tasks to fill definite places in the vocational world and to help make democracy work in the community and in the nation.

Last week, in the farm shop at WHS, we began a course in woodworking for boys between the ages of 17- 25, and who are interested in carpentry. This course is being taught by Elbert Jenkins, who is a very capable instructor. The purpose of this course is to give boys training in the fundamentals of woodworking and care of woodworking tools.

The boys who enrolled in this course are also enrolled with Kentucky Employment Services and on completion of the course, at which time they receive a certificate card, they have an excellent opportunity of employment in industry connected with the defense program.

This course is being offered from 4-7 in the afternoon. Mr. Jerry Johnson is the Agriculture teacher

Saturday evening, at 7 p.m. the WHS Future Farmers of America held its 4th annual Father and Son Banquet. This banquet is a yearly affair, sponsored by the boys who want to express in some suitable manner their appreciation for the support and kindness shown them by their fathers. The chapter organization cannot possibly rise to noticeable heights without interest and support from the outside, and in the case of the F.F.A., much of this vital support has come willingly from interested fathers.

The banquet was one of the greatest successes ever sponsored by the chapter. Every Future Farmer was present, a total of 61. There were 53 farmers present which together with the sons, not inclusive of the several special guests and honorary members totaled 114; last year, all told only 101 were present. There were also 6 part-time students from Colley present. The banquet was followed by a short program of brief explanatory speeches by the following boys and music by the chapter band: Chester Holbrook, Our Farm Practice Program; Edison Banks, The F.F.A. Co-Operative; Harry Caudill, Our Participation in F.F.A. Contest.

Days gone by while at Whitesburg High, by Hal Sports

The WHS Yellow Jackets defeated the Jenkins Cavaliers last Wednesday night to a score of 34- 19. The Yellow Jackets were represented by a good crowd who backed them up with plenty of yelling.

The Yellow Jackets defeated Cumberland last week to a score of 27-26.

The Yellow Jackets defeated the Fleming Pirates last Saturday night to a score of 28-18.

Ye gotta have the ole spirit. The school spirit in WHS is ebbing low, interest is fading. The Science Club, Glee Club and the class meetings are not functioning with pep-speaking of pep; we need a pep club to yell for basketball boys. Instead of pioneering, we are following a daily routine of classes, which of course is what we are supposed to do, but a greater spirit can be added. One change we are in need of is a whole room devoted to a library of books, good magazines, and articles on the various phases of life. For a library, we have one side of the stage latticed off. There should be a change, students. It is up to the students to make Whitesburg High School outstanding as well as just a place to have classes.

(The above article from the Feb. 15, Mountain Eagle.)

Days gone by while at Whitesburg High, by Hal Sports

The WHS Yellow Jackets attacked the Fleming Pirates ship last Friday night. The two teams played fast and furious through the first quarter of the game, neither side gaining a score. First quarter the score was 6-6. Through the second quarter, Walker Pigman and Bill Tolliver broke loose for field goals, which made the score in the Yellow Jacket’s favor at the half. The end of the third quarter rolled around with a tie 15- 15 with Wiley Bates making plenty foul shots. In the last quarter, Amos Cook and Bill Tolliver fouled out and so did two of Fleming’s players. Kermit Lucas scored a field goal and foul shot for Whitesburg in the last few minutes of the game making the score 21-19 in favor of Whitesburg. The Yellow Jackets made five field goals, where Fleming made eight field goals and three foul shots. The game was refereed by the coach of the Jenkins Cavaliers.