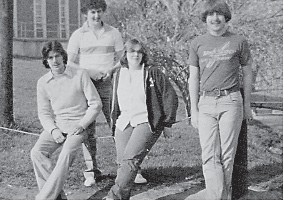 We would like to welcome Mr. John High, a new teacher and coach, to WHS. He will be teaching three units of health and P.E. His teaching experience started six years ago at Rowan Co.

Mr. High has been at Morehead for the past six years, and has been coming back to Whitesburg representing Morehead State University. He mentioned he had gone to school with many from Letcher Co. while at MSU.

Before Mr. High’s present job, he worked at Morehead Admissions, where he was coaching women’s softball. In the past he has coaching experience in basketball, baseball, swimming, softball, and football for both men and women.

Mr. High will be the new coach for women’s basketball this year. He commented that he was looking forward to a good year and many more. 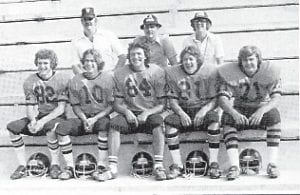 A few weeks ago, Mr. Alfred Rage, a folk singer, performed at our school. Mr. Rage happens to be a very talented man. Along with playing many musical instruments, he is an excellent singer. Mr. Rage was also successful in getting the student audience to participate and sing along with him and that is not easy to do. I am convinced that Mr. Rage loves to travel because he has performed in many countries and schools. I, myself, greatly enjoyed the program and I’m sure everyone else who saw it did, also. By Regina Combs.

More of the Senior Will: Renee Hall wills her favorite birthmark to Ronald Baker. Betty Adams wills her walking to Sharon Banks. Danny Ison wills his basketball playing to Jack Spangler. Nolan Roark wills his pet donkey to Anna Sexton. Delynn Gibson wills her bra size to Michelle Williams. Kathy Combs wills her looks to Mary Hampton. Valeria Craft wills her sewing ability in Home Ec. to Margie Hogg. Dianne Banks wills her high-powered rifle ability and her wonderful clarinet talents to Carolyn McPeeks in hopes she can do something with them. Vinson Wurschmidt wills his ability to get out of school to Teresa Sexton. Luther Sexton wills his driving ability to Nancy Long. Louis Cook wills her chair in the main office to Jackie Sergent. Michael Collins wills his 1st 1s t position on trumpet to Ginger Adams. Ramona Combs wills her seat in Pre-Calculus to Nancy Huff. Rhonda Caudill wills lots of money to Tony Lawson. Tom Brock wills his ability to come to homeroom late to Rodney Slone. Billy Caudill wills his Z-28 and fishing skill to Teresa Brown. Tim Boggs wills all of his cooking skills to Greg Hogg. Cyrus Boggs wills his mechanical ability to Marty Collins. 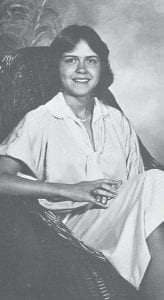 This year’s goal is 1600 units; if it is reached the profit should be approximately $4500.

Jackie Breeding is the daughter of Mrs. Shirley Breeding of Isom. She is actively involved in DECA, Math, and Beta Club. She is the co-editor of the Black Kat newspaper. She is active in Rainbow Girls and was the Demolay Sweetheart in 1979. She was elected to Who’s Who in American High School Students and has been active in 4-H.

Our class reporter Eager Eighty just enters the high school cafeteria for the 20th year reunion of the class of 1980. He sees many familiar faces as he scans the crowd. Rhonda Adams, Mitzi Hammock, and Jane Kimberlin are entertaining the crowd; they are now a renowned trio. Kathy Baker, a professional dancer, is discoing to their melodious sound. Eager Eighty is surprised to find Billy Caudill, the drummer for KISS, and Donnie Hall, AC-DC’s lead guitarist, providing the back-up music.

Diane Banks is telling Shade Frazier, who is playing Shadevator in the remake of Star Wars with his glow-in-the-dark sword, about her movie career. Michelle Cates is discussing her new Broadway play with Tracie Estep, Charlie’s newest angel, and Carolyn Lowe of “Paper Roses” fame. Connie Wagner has her fabric shop at Cowan. Nora Raleigh and Ann Wright are working at UCLA Medical Center and their pilots to Kentucky are Ronald Gilliam and Vinson Wurschmidt. Marlene Webb is receiving the Kentucky Homemaker Award.

Everyone is shocked to discover that Tammy Garrett has dyed her hair blonde, in order to be the dynamite blonde for her champagne commercials. Jim Hogg is trying to teach his classmates on the dance floor the Hot Spot Hustle. Jeff Adams, Moe in the Three Stooges, and Phillip Adams, who is directing Fantasy Island, are comparing their television jobs. We are honored to have Chuck Blair, the lead singer for Chuck and the Duds, do a number for us.

Tammy Boggs, the owner of Maloney’s, is talking about sales with Loretta Brashears, the assistant manager to Joe Walters at Superior Market, Nancy Brown, who is the proud owner of Dickie’s Dry Fork Market, and Donna Cook, who is manager of the school store for Mr. Welch. Lisa Hampton, who is now Farrah Fawcett’s personal beautician, is laughing with old friends Patty Meade and DeLynn Gibson who spend all their time lying out at Myrtle Beach hoping to get the perfect tan. Their friend, Pam Morris, won the Miss Letcher County Pageant and is now in the line-up for Miss USA.

As Eager Eighty mingles with the people, he finds that several graduates are happily married. Tim and Melinda have just had their tenth child, Fini Boggs, Ramona Combs and Estill Banks are now married law partners, Patricia Sexton is their legal secretary and Carolyn Sizemore is her assistant. Regina and Robbie are participants in an aviation stunt show in Wisconsin. Arlena Mc- Call, who is an R.N., and Charles West, who is still at S-Mart, has proved that high school romances can last forever. Joyce McCool is happily married, but she refuses to reveal the identity of the lucky man.

Eager Eighty has learned that many WHS graduates have their own businesses. Tom Brock has his own cattle ranch in Texas and has employed Jeff Gibb, Bobby Kincer, and Randy Lowe to help him brand the cattle. Scott Frazier is managing the Auto Parts and his other successful enterprises. Kathy Combs and Charlotte Johnson have opened their own health spa. Denise Gilliam, Betty Adams, and Darlene Hall are charter members. Mark Adams has his own line of slow septic tank and swimming pool diggers. Danny Mark Ingram has taken over the operation of the Fuzzy Duck and Jerry Mullins is his bartender. Mike Ison is now the President of the new Orkin Company. Luann Vermillion is a fashion designer and Jackie Breeding has opened a boutique to sell all of Luann’s fashions.

Our reporter hears Monica Adams telling Missy Mohn, the doctor that specializes in test tube baby deliveries, that she is still looking for that perfect pair of maroon shorts that she lost at the state tournament. Some graduates refuse to let go of their high school days. Dewey Bradley is still trying to find the office, which he never saw in his four years of school. Theresa Madden is still working very hard in hopes that some day she will turn in a research paper in Mr. Sexton’s 102 class. Roy Brown is teaching driver’s education to all the students and Kenny Miles is teaching tuba lessons in the band room. Hester Fields is still reporting to Mr. Henrikson’s homeroom every morning. Bryan Wells is trying to find Mr. Welch’s first period class. Diana Gilliam is the President of the DECA Alumni Association. Cheri Profitt, on her nightly Sandlick tour, sees Donna Maggard making telephone calls at the phone booth in the A&P parking lot.