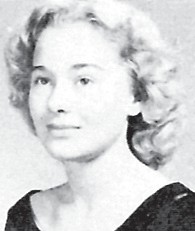 Winter is here so the girls are wearing kneesocks, they do not flatter the legs, but who cares on days like we’ve had this week. The small snow everyone woke up to Wednesday morning called for warm duds.

Turkey Day was hardly settled when we started making our Santa Claus list. We must not be too early because the school has started decorating and the Black Kat has a “Letters for Santa Claus” box in study hall.

The Speech, “I Speak for Democracy” contest closed with our contestant, Don Webb placing second. The winner was from Jenkins and others participating were from Stuart Robinson, Fleming, and Jenkins.

The long faces seen around on campus are because the grades were given out. Everyone is saying I’ll study hard next month to make that up.

Mr. Boggs received a letter from the ring company and the long-awaited time will be the week of December 12. Mr. Seale from Lexington will be here with the rings. No more dates, seniors (save your money for your ring). Maybe that cute gal will let you wear it the first week anyway.

The Beta Club gave an invitational rush party for the new members Tuesday. Refreshments were served and twenty-seven whose grade, ability and character merited it were invited to join. This is an Honor National Club which is accepted very high in college club Phi Beta Kappa. Members receive a magazine, also Beta Pin and Gold Seal on their diplomas saying they are Betas. Monday the student body had a sneak preview of coach Trosper’s 1956 Whitesburg High School Yellowjackets. The boys ran a few plays and everyone was overwhelmed with the improvement the boys had shown over the last year.

Tuesday night the welltrained team skipped away with an easy victory over Stuart Robinson (72-49). Although the B team lost a heartbreaker by only 4 points, the boys played hard.

The amazing atmosphere this year on the basketball team is the relationship between coach Trosper and his boys. It has even affected the pep section and the whole school. He not only teaches and guides them, he feels like another fellow on the team. Everyone likes him and the team. Old man spirit is really jumping, the school is behind you 100 percent.

(The above article from the December 1, 1955 Mountain Eagle.)

On February 2 and 3, the Whitesburg Speech Class under the direction of Mrs. W. B. Hall, presented to the grade school and the high school two one-act plays and two humorous monologues.

“ Love Hits Wilbur,” a comedy, was well produced by Gene Collier, Shirley Stallard, Clara Lou Webb, Ada Louise Fields, Roberta Jenkins, and Sewell Barrett. The plot was based around Wilbur, a thirteen-year-old boy who hated girls, but soon learned to like one in particular, Clara Lou Webb.

The two monologues were done by Cecil Barnes and Wilsie Mae Mason.

Thursday, February 10, at 1 p.m., and Friday, February 11, at 9:30 a.m., the Speech Class will present two other one act plays and three monologues. The plays to be produced are: “No Greater Love,” and “ Tell It To The Morans.” This promises to be a good program. Admission will be 10 cents and 25 cents. From the four one-act plays done by the Speech Class this month, one will be entered in the Regional Drama Festival at Pikeville on February 26.