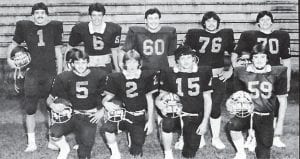 On Nov. 4, the Jackets played their final game of the season and to the delight of the seniors it was at home. The Jackets thought since it was the last home game of the season they might as well go out in a big fashion and that they did as they beat Knott County Central by the score of 47-31.

Tim Smith looked great and got back into the swing of things after his injury as he passed for 2 touchdowns and ran for 2 more. Smith ended the game 6 of 11 in passing for 99 yards. Rushing for the Jackets was led by sophomore tailback Eddie Fields, who carried the ball 23 times for a total of 132 yards. Fields was followed by senior fullback Tim Howard. Howard rushed for 61 yards on 10 carries.

The defense for the Jackets was led by seniors as all the seniors for the Jackets gave it their all. Roger Carter led the way with 8 tackles, 2 assists and a fumble recovery. He was closely followed by Tim Howard, who had 4 tackles and 2 assists. 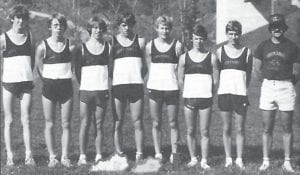 Pictured are the members of the 1984-85 boys’ cross country team.

In honoring the seniors, the Black Kat Staff would like to congratulate and thank each one for contributing their talents and efforts to the past four football seasons. We acknowledge the continual hard work all have done and would like to wish you the best in the years to come.

On Nov. 5, the Whitesburg boys’ cross country team traveled to Lexington to represent their region in the 1983 State Cross Country Meet. Their year of hard work and determination came to an end as the Yellowjackets came home with the State Runners-up trophy, falling short to Fort Thomas Highlands.

The Jackets were led by 3 All State Runners, Jimmy Stephens, Jeff Collier and Sonny Bates. Stephens was the individual state runnerup with a time of 16:50. Collier was fourth in 16:54 and Bates was ninth in 17:12. Not only did these three boys turn in a great performance, but also James Meade who finished 58th in 18:18 and Harrison Thomas was 60th in 18:21. Tim Fugate and Ronnie Morris also had a good race, both under 19 minutes. 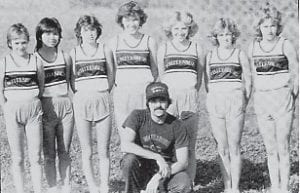 Pictured are the members of the 1984-85 girls’ cross country team.

On Nov. 5 the girls’ cross country team also traveled to the Lexington Horse Park to represent their region in the 1983 State Meet. When the dust cleared at the Horse Park it found these girls from Whitesburg had nailed down the fourth-place finish. Led by All-State performer Monick Wampler, the Lady Jackets received the respect they deserved. Wampler finished third in 11:12 followed by Deanna Boggs in 19th in 12:09, Kathy Spangler finished 42nd, Elizabeth Watson 62nd and Vickie Sexton 105th.

Coach Eddie Holbrook feels that with hard training and determination that these girls will be a team to contend with next year.

(The above article from the 1984 WHS Yearbook and Black Kat newspapers.) 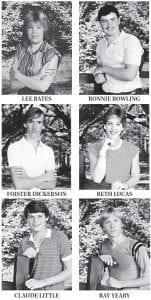