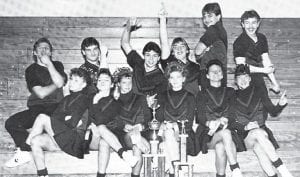 The cheerleaders participated in the Regional National Cheerleaders Association open competition in Lexington on Oct. 31. They placed 1st in the large division and therefore will be competing at the national competition in Dallas, Tex. They will be leaving Knoxville on Dec. 26 and flying to Dallas for two days of competition. They will be competing in the large co-ed division. The cheerleaders who will be competing are Missy Amburgey, Jeff Holbrook, Bobby Adams, Tammy Caudill, Sarah Hayes, Martie Banks, Kim Brown, Kim Lucas, Craig Ison, Brian Collins, Kirk Cornett, Angie Hatton, Amy Mullins, Jennifer Stephens, Jessica Webb, Georgia Mullins, and Lonnie Howard.

The ceremony was held at the First Baptist Church in Whitesburg and began at 6:30 p.m. 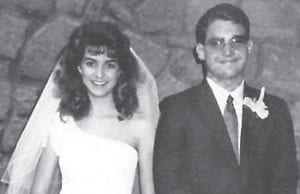 It took a whole semester to prepare for the wedding, which was for a grade. Everyone worked really hard because they wanted it to be perfect. And perfect it was!

Sophomore April Hall began the ceremony by playing two songs on the piano. Then the groom, Michael Frazier, the best man, and the preacher entered. Next, sophomore Rebecca Craft sang a love song.

They said their vows and Rebecca sang another song while Michael and Patricia lit their candles. The preacher, Kevin Holland, pronounced them man and wife and the recessional walked out.

The reception was held at WHS on Friday, Nov. 20, 1987. A great many thanks go to Mrs. Barker’s 4th period for preparing the reception. But especially to Mrs. Napier for being so patient and understanding with everyone.

Also a great many thanks are given to Sue Banks, the photographer, and Rick Vance, who was in charge of the flowers.

WHS Miss Celesta Richardson has been a member of 4-H for 9 years. Celesta has accomplished many things in her 4-H camp council and is an active member in talk meets and variety plays.

Celesta has been to state three years for being Outstanding Area Teen. In order for her to achieve this award she must attend 4-H regularly, be a 4-H camp counselor, and win talk meets and variety shows.

Celesta attended a training seminar at Jabez this past summer. This seminar was for outstanding leaders. It lasted a weekend and consisted of how to become a better camp counselor, how to deal with problems and fears of early 4-H’ers, and homesickness.

Celesta, like many of our students, is active in church and other youth organizations outside of school.

The Harris Award was named in honor of Professor H.H. Harris, who served as Principal of Whitesburg High School from 1919 until 1927. It is awarded by the faculty to a senior boy on the basis of leadership, character, and scholastic standing. This year’s recipient is Mark Wampler.

The Dugan Award was named in honor of Miss Ann Dugan, who served as the Home Economics teacher for 27 years at Whitesburg High School. The award was first presented in 1966 and was awarded by the faculty on the basis of character, scholastic standing and leadership ability. This year’s recipient is Deanna Baker.

The Mountain Heritage Festival was held during the week of September 21-27 and WHS competed in several events.

WHS stood out in the Mountain Heritage Parade. The WHS Marching Band won second place. The WHS JROTC took the Judge’s Trophy. Mr. Buddy Roe and Rebecca Craft won the titles of “Ma and Pa Whitesburg.” Congratulations to all who participated!

In efforts to keep your heart healthy through exercise, the American Heart Association has formed a fundraiser to fight against heart disease and stroke. This fundraiser was done on Oct. 16. The 1st, 2nd, and 3rd Physical Education Classes participated. They jumped rope divided on teams. They jumped a total of 45 minutes a day. The top team raised $131. The top fundraiser was Shawn Cook with $74 and the runner-up was Charlotte Collier with $70.50. The teams together raised a total of $610 in the combined days.