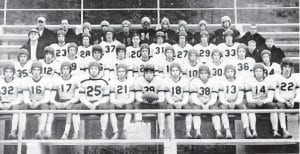 On March 26, the Athletic Association honored the football and basketball teams and cheerleaders of WHS with its annual athletic banquet at the Whitesburg VFW Club.

The invocation was given by Rev. E.H. Barnett of the local Methodist Church. After a wonderful dinner of fried chicken, Mr. Albert Jones, President of the Athletic Association, gave the welcoming address and introduced Mr. Dave L. Craft, Superintendent of Letcher County Schools, and Mr. Kendall Boggs, principal of the high school. Each made a brief talk. Mr. Fields then introduced the coaches of the high school, who in turn introduced each member of the athletic teams individually. The introduction of the cheerleaders was made by Miss Dorothy Jenkins and Miss Betty Little, the faculty advisors of the Pep Club.

The toastmaster then introduced the main speaker of the evening, Rev. C. A. Lingle of the Presbyterian Church, who made a most interesting and unique talk on sportsmanship, being a good winner rather than a good loser. 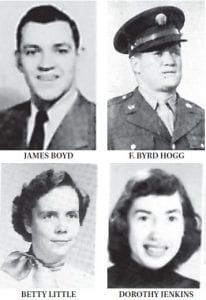 The Whitesburg Band under the direction of band instructor, Jack Taylor, participated in the festivities at the Tug Valley Festival at Williamson, W.Va., on Saturday. Ten bands took part in the marching, Whitesburg making an outstanding showing. This was not a competitive event, but much valuable experience was gained by the band members through the association with the outstanding bands, and the Whitesburg Band was highly commended for their performance.

Phyllis Hall, daughter of Mr. and Mrs. Charlie Hall, reigning queen of the Big Sandy Valley Bowl, received recognition along with five other bowl queens. During the evening the band was invited to the armory for a skating party and a dance at the Moose Club from 8 to 10 o’clock.

Jim “Sonny” Boyd was born in the State of Alabama, moved to Kentucky in 1928, settled down at Blue Diamond. During 1932 he came to Whitesburg, where he completed elementary school and moved to Lynch, in 1942, there he completed four years of high school and entered college at Georgetown in 1946.

He completed college in 1950, and came to Whitesburg, where he taught and was the assistant coach under Ray Pigman. During the first part of 1951 he was called to service, and spent two years, of which 11 months he served in Korea. He was discharged on the 20th of December, after which time he returned to the University of Kentucky and continued his education where he received his A.B. degree. He is the present assistant coach at WHS.

Jim is well connected in Letcher County being the son of Mrs. Nora Boyd, eldest daughter of the late J. H. “Hop” Gibson.

F. Byrd Hogg, former Letcher Countian, son of Mrs. S.M. Banks and the late Harvey Hogg, former Circuit Court Clerk of the county, is opening law offices in the Lucas Building on Main Street. Mr. Hogg comes from the offices of the Manufacturing and Merchants Indemnity Co. in Cincinnati and graduated from the University of Kentucky Law School in 1930.

Mr. Hogg served in World War II for four years, participating in battles in Germany and France, receiving wounds, which necessitated his confinement in an army hospital for a period of two years.

Mr. and Mrs. Hogg and son, Stephen Leslie, are now residing in the Collins-Harvie Addition.

Creating more interest and enthusiasm at the athletic events and other school activities as their goal, Misses Betty Little and Dorothy Jenkins have organized the Whitesburg Pep Club. Membership is by invitation and is based on a student’s display of unusual school spirit. The sponsors feel this will provide a select group. To date about 40 invitations have been issued and accepted. There will be no limit to the membership but the club plans to grow gradually.

There will be a reserved section of the stadium and gymnasium for members. Attendance will be checked. Special yells will be worked out with the band and cheerleaders. Plans are not definite but the school colors of orange and black will be used in some way at the games. There will be a social at the end of the season.

Since its organization the Pep Club has participated in different activities, the most outstanding being the rally previous to the Pikeville game. The procession of the snake dance led by the band through the streets of our town and ending on college hill where a bonfire was lit, gives an idea as to just how lively they will make things.

Evidence of the school spirit was really displayed by this club at the Cumberland- Whitesburg game.