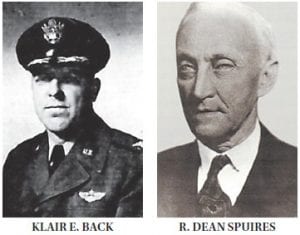 Klair E. Back (WHS Class of 1931) gets Air Corps promotion

Prior to assuming his duties at Augusta, Lieutenant Back was a flight instructor at Randolph Field, Texas, and at the Air Corps Basic Flying School at Montgomery, Ala.

Malstrom Base Commander slated for post as air attaché to Greece

Col. Klair E Bach, Malstrom Air Force Base Commander, will leave Saturday for Washington, D.C., to begin five months training preliminary to assignment as air attaché to Greece, it was announced here Tuesday. No successor to Back has been named but an appointment is expected soon.

Back has been at the base here since June, 1953, and from that date until February, 1954, was air base group commander for the Military Air Transport Service, then stationed at Great Falls Air Force Base.

When the Strategic Air Command moved in replacing MATS, Back became base commander. With his wife, Lila, and 11-year old son, Richard, he resides at 786 Lincoln Drive. When Back first came to Great Falls, he replaced Col. Tracy J. Peterson who was transferred to an assignment similar to the one Back left in Japan. Back had been commander of the Third Air Rescue Group in Japan and saw combat duty, flying 48 missions in Korea as a command pilot.

Back, a native of Whitesburg, entered cadet training in 1940 after attending Georgetown College and the University of Kentucky. After graduation he was flight instructor at Randolph Field, Tex., and Maxwell Field, Ala. He then was director of training at Marianna, Fla.

Later he was director of supply and maintenance at Stewart AFB, N.Y., and material officer in Hawaii for a fighter wing. After attending command school in Washington, D.C., for two years, he became instructor general for the Rescue Service before going to Japan.

His decorations include the Legion of Merit, Bronze Star and Air Medal.

The Whitesburg basketball team invaded the lower Cumberland Valley sections and came back with the scalps of London and Barbourville dangling at their belts. It was on Friday night that our Yellow Jackets went to battle with London, which had lost to the celebrated Carr Creek team by only two points. At the very beginning our boys dashed right ahead, due to the keen and accurate shooting of Potter and Brashear, and leading the London boys at the end of the first quarter 10 to 5.

At the end of the second quarter, London fighting fast and furious and our boys doing the same, the score stood 18-14, still in favor of the Yellow Jackets.

After a short rest period, the London boys came into the game furiously and soon jumped ahead 24-20, but the playing of S. Potter soon brought the Jackets out of the hole, with two goals from mid-floor and again went over the top.

The game ended amid furious shouts and screams, with a score of 31-29. This game ranks Whitesburg High with the very best in the Cumberland Valley.

On the night following, our boys met the Barbourville Baptist boys in a slow game and won from them on a score of 18 to 19. Whitesburg came from the battlefield with a high opinion of the gentlemanly boys they had met.

(The above article from the February 5, 1931 Mountain Eagle.)

The juniors gave a banquet for the seniors, Saturday evening, May 2, in the school gymnasium, and it was indeed the one outstanding event of the commencement exercises, also the nicest and most beautiful banquet ever given by the juniors of WHS.

Thirty odd seniors and the entire high school faculty were present with fifty juniors acting as host and hostess.

The banquet hall represented a beautiful garden, the stone walls twined with vines and shrubbery, streamers floating everywhere, lanterns and balloons hanging overhead, and in one corner of this enchanted garden an old fashioned well stood — a stone well covered with moss and ferns.

All electric lights were turned off and one candle on each of the 24 tables gave all the light necessary to carry out the effect.

James Doyle gave the welcome address, and Gay Webb, senior president, the response. Next was a quartet, “ The Waltz You Saved for Me,” by Inez Cook, Margaret Gault, Fallace Fields and Klair Blair. Then there were addresses, “To the Seniors,” Lena Collins; “Memories,” By Cora Addington; “Future Hopes” by Hansel Brown; and “Farewell” by Olan Cook.

Various types of music was rendered between the addresses; as a duet, “Stars and Stripes Forever,” by Miss Hale and Mr. Savage; musical recitation by Elline, accompanied by Miss Hale; quartet, “School Day Sweethearts,” Inez Cook, Margaret Gault, Fallace Fields and Klair Back; piano selections by Mr. Savage and a group of farewell songs by the entire junior class.

There was lots of noise and fun, as was to be expected at the junior-senior banquet for little noisemakers’ souvenirs, fortunes and caps were given to each person.

James Doyle, president of the junior class, acted as toastmaster for the evening, and he, with the help and cooperation of the juniors, made the seniors and teachers, and his classmates as well, have a grand and glorious time.

The high school glee clubs are closing a very successful and enjoyable year. They were organized with 15 charter members in each club with Margaret Gault president of the girls’ club, Follace Fields president of the boys’ club and Rosa Hale as sponsor and accompanists. The girls’ first appearance was made during U.K.R.E.A., Oct. 10. They sang two delightful numbers for the Thanksgiving service at the Baptist Church, and have furnished music at other services there. They have also been represented at the Methodist Church in special music. On Friday, Dec. 20, a beautiful vesper service was given by the clubs. During the year they have given a minstrel, assisted Miss Hale in giving a chapel program for the grades, given a special program in high school, entertained at the band concert and are now being complimented on the success of their major project of the year, a musical comedy, “The Belle of Barcelona.” They have many plans for National Music Week.

(The above articles from the 1931 Black Kat Newspapers.)