Meet some of the seniors

Marcia Polly, favorite food and drink, steak and Coke; favorite singer, The Supremes; secret ambition, none; pet peeve, people who talk too much.

Bobby Stallard, favorite food and drink, spaghetti and Coke; favorite singer, Johnny Mathis, Andy Williams; secret ambition, to become a singer and actor; pet peeve, can’t catch up with the girls; favorite song, When You Walk Through a Storm. 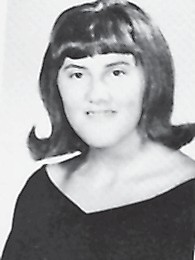 Henrietta Goins, favorite food and drink, pizza and Coke; favorite singer, Mamas and Papas; secret ambition, to be a success in life; favorite song, My Cup Runneth Over; pet peeve, none.

Soldier of the Month

Pfc. Donald P. Profitt is now serving with the U.S. Army, 151 Transportation Detachment Pien Hoa, Viet Nam. He received his basic training at Fort Knox and his helicopter mechanic training at Fort Eustis, Va. He is a 1963 graduate of Whitesburg High School. He is the son of Mr. and Mrs. Donald Profitt and he has three sisters who attended WHS, Lenice, Betty and Rita.

Day in the Life of the Black Kat

The Black Kat decided to take a stroll down the halls of Whitesburg High. On its way to the first homeroom, it overheard the following conversation. “Margaret Caudill is getting married!” “Really?” When and to whom?” “I heard,” said another, “that she is going to marry Jesse Hall, June 17!” With this bit of information, the Kat continues on its way.

After first period the Kat went along in a group to second period. It seemed everyone was talking about Linda Franklin and Larry Taylor’s wedding June 3. During the pep rally it noticed that there seemed to be a chain reaction of love for Nancy Brock was certainly making eyes at Roger Collins. Mable Bentley could hardly cheer for she couldn’t keep her eyes off Dean Craft. The Black Kat detected a slight change of pace on one side of the gym. Joyce Bowen and John Craiger were about to break the chain reaction and when it reached Jewell Collins and Donald Brown, it came to a screeching halt. The Kat was about to give up on the idea of love but it soon got back into the swing of things during third period. This is when the Kat heard that Sandra Kay Day and Harold Frazier just couldn’t be broken up.

The thought of this brought a special gladness into the Kat’s day. Then at lunch the Kat stayed with Nancy Gibson because she had that special glow, which meant that Roger Blair had to be somewhere near.

Fourth period the Kat passed Sheila Day and was glad to hear that she and Stevie Hale are still going together. The Kat also heard that Eileen Noble and Rush Tackett are going to get married. The Kat was very glad and was fixing to congratulate her when Barbara Hall announced that she was engaged to Alvin Eldridge. Through all the excitement, congratulations completely slipped the Kat’s mind.

Fifth period the Kat found out that Sandra Bryant became Mrs. Bobby Caudill, Feb. 6. The Kat also heard that Judy Hammock and Larry Brown are getting along fine.

As the day came to a close, the Kat was proud to say that all in it had been a nice day.

The most valuable player in this game was Bobby Dan Blair, who along with the rest of the team gave Hindman a hard game. We lost ( 70- 66) in a double overtime.

The most valuable player in this game was William Wright, who along with the rest of the team gave the Pirates a hard fought battle in which we lost by only three points, (34-31). Two of these points were made after the game was over with.

Bernita W. to Mike Johnson, It Tears Me Up. Ruth Sue Adams to Thomas T., I’m a Believer. Marcia H. to Jimmy M., I’ve Got You Under My Skin. Andy Lee C. to Pauline, Try a Little Tenderness. Debbie M. to Jimmy, Stand By Me. Carol S. to Jimmy J., Soul and Heart’s Inspiration. Duke C. to June P., If It Don’t Work Out. Ann Baker to Charlie Baker, Warm and Tender Love. Lenice P. to Larry C., All These Things. Sheila D. to Stevie Hale, All These Things. Jimmy M. to Evelyn Sexton, Coming Home Soldier. Astor H. to Jeanette M., I’m Walking the Floor Over You. Nancy G. to Roger B., I’m a Believer. Jenny G. to Bobby C., All These Things.