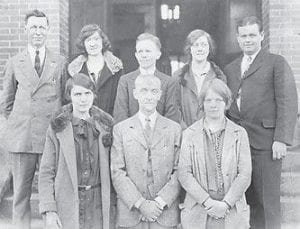 Listed below are members of the 1927-28 Whitesburg High School faculty.

Marvin Glenn was born March 17, 1901 at Calhoun, Ky. Mr. Glenn attended Calhoun Graded and High School, being graduated from the high school in 1921. He then taught school for a year in McLean County. He then entered Kentucky Wesleyan College at Winchester, Kentucky in the fall of 1922. Mr. Glenn finished his college course there taking an A.B. Degree in 1926, majoring in English and French and minoring in education.

Mr. Glenn worked his way through college and was president of his freshman class and senior class in college.

Mr. Glenn came to Whitesburg as an English professor and basketball coach in 1926. He has been with us for two years.

She received her life certificate from Eastern Normal School in 1922 and received the A. B. Degree from the University of Kentucky in 1927.

E.B. Hale is a native of Letcher County. He started school at the age of 11 on Rockhouse. He began his teaching career on Carr Creek in Knott County at 19.

Mr. Hale organized the first graded school at Whitesburg and Letcher County in 1910. He graduated from Whitesburg High School in the Class of 1917. Mr. Hale was county superintendent from 1918 until 1922. He was then a student at the University of Kentucky during the summer of 1923. He is a senior in the Eastern Kentucky Teachers College this year.

Mr. Hale has taught in the Whitesburg High School for the past three years.

Mr. Harris had six years’ experience as a teacher before coming to Whitesburg High School. He took postgraduate courses at the University of Kentucky in the summers of 1925 and 1927. Mr. Harris has charge of our science department.

Cecile Elliott was born near Richmond, Kentucky on June 27, 1900. Miss Elliot was graduated from Hamilton College, Lexington, Kentucky. In college, she took preparatory work and was also a student in the music department, under Franlein Scodo, of the Royal College at Leipsig. Miss Elliott then took a special course at the Cincinnati College, a pupil of Wilhelm Kraupner. She was then graduated from Eastern Kentucky Teachers College in 1926. She then took special work in Peabody College in Nashville, Tenn. Miss Elliott taught in the Harlan school in 1923 and 1925. Miss Elliott took charge of our music department in September of 1927.

Elis Cleary was born in Georgetown, Kentucky on April 24, 1906. She attended the Georgetown public schools and was graduated from Georgetown High School in 1924. She then attended Georgetown College, where she graduated with an A.B. Degree in 1927. She has been at Whitesburg one year, as an English and biology teacher. This is Miss Cleary’s first year to teach school.

Hazel Lewis was born in Whitesburg. Miss Lewis attended the Whitesburg Graded School, and then her family moved to Georgetown, Ky. She attended the public school there and was graduated from Georgetown High School in 1924. She then entered Georgetown College and received her A.B. Degree in 1928. Miss Lewis is our mathematics teacher.

Editorial: The Future of

the Whitesburg and Letcher County High

With the completion of the road to Seco and with a hard surfaced road to the Knott County line, the Whitesburg and Letcher County High School is to grow in number until it will soon be necessary to build an addition to the high school building.

With such a progressive superintendent as R. Dean Squires and the present board of education the future success cannot be denied.

Our county Supt. Arlie Boggs with his very progressive and farseeing board is working hand in hand with the city board to make for Letcher County a high school as good as the best.

This special edition of the Black Kat is urging the boys and girls from the rural schools to become members of the best high school in Kentucky as soon as they have finished the eighth grade.

(The above information was from the May 1928 Black Kat.)