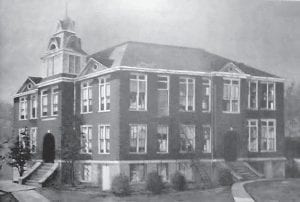 Can you identify these WHS graduates? Answers are at the end of the column.

(Answers at bottom of column)

1. This individual served as the first principal of Fleming High School before becoming principal of WHS from 1942-1946.

3. The only student to be elected “Mr. WHS” twice was: (A) Don Woodford Webb (B) Hillard Howard (C) Jay Fields (D) Jeff Holbrook.

4. WHS’s yearbook that was first published in 1944 was called: (A) The Yellowjacket (B) The Black Kat (C) The Jacket Journal (D) The Clarion.

7. The only woman to serve as principal of WHS was: (A) Helen Cooper (B) Ann Dugan (C) Cleo Stamper (D) Denise Caudill.

10. The Yellow Jacket football team played its first game during the 1928-29 school year. The head coach of this first team was: (A) Beckham Combs (B) John Horkey (C) Jack Glen (D) Millard Tolliver.

12. The school annual, “The Yellow Jacket” was first printed in 1955. The advisor to this first yearbook was: (A) Ida C. Wright (B) Ruth York (C) Dorthy Jenkins (D) Jan Combs Trosper.

14. The person that had the longest tenure as head football coach of the Jackets was (A) Beckham Combs (B) Millard Tolliver (C) Gardner Bates (D) James Gose.

15. This publication of the WHS English Department, presenting some of the best creative writing efforts, was first printed in 1962. Miss Delma Gilley won a $ 5 award and the honor of naming this publication. (A) The Jacket Journal (B) Lit Wit and Logic (C) Writing from the Hill (D) Creative Ideas of WHS Students.