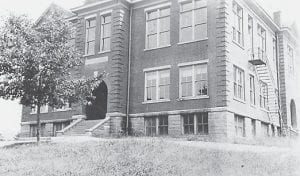 Dear Santa, please bring me a pair of earmuffs. I’ve been accused of eavesdropping. The Black Kat.

Dear Santa, please bring me four new tires, a gallon of gas and a Navy Lt., P.S., Don’t forget the car to put the tires on. Dorothy Fields.

Dear Santa, please send me a Prince Charming who doesn’t insist on matrimony. I don’t like to cook nor keep house. Dena Ison.

Dear Santa, not trying to get “witty,” but do you think you could bring me long, curly locks like Charlotte Boards to go with my dimples? Glenna Little.

Dear Santa, now is the time to be conservative. Just send me Keithel without all the wrappings. Bonnie Hall.

My Dear Mr. Claus, just whittle that paddle I asked for into toothpicks and rush them please. Mr. Reed.

Dear Santa, remember, I’ve grown to be a man since last Christmas so just make those new shoes size 13 instead of 10½ . Jack Wise.

Dear Santa, please send me a watch that will keep time with the bell or vice versa. Miss Dugan.

Dear Santa, if you can’t possibly send me John D., then maybe a magician could do the tricks. Betty.

Dear Santa, please bring me a new tie, the one you sent me the year before last has lipstick on it. Gene Vermillion.

Dear Santa, please send me a false face for Christmas. Girls are getting on my nerves. Tommy Gish.

Dear Santa, please warn my students not to eat candy so that they can pass the test on Health immediately after Christmas. Mrs. Hurst.

The Whitesburg Yellow Jackets, paced by Junior Haynes scoring 14 points, defeated Vicco by a score of 41 to 33. Other members of the team scored as follows: Paul Pigman, 8; David Fields, 8; Keithel Reynolds, 8; Frank Amburgey, 2; and John D. Sergent, 1. All members of the team are now out for practice after completing their football season and are gradually molding into a basketball team. Players for this year’s team are Paul Pigman, Junior Haynes, Frank Amburgey, John D. Sergent, Edwin Holbrook, James Goins, Keithel Reynolds, David Fields, Ralph Day, Emory Lewis, Jack Fugate and Ishmael Craft. Coach for the Yellow Jackets is Sanford Adams.

Miss Ann Dugan appears to be literally swamped with work. But she’s not the kind to give. She just employs another secretary to make her reports and rambles right along.

What’s this report about Thelma White doing janitor work in Mr. Estes’s room? She’s been seen cleaning up paper down there anyway.

Archie Hunsucker and Wilgus Holbrook ought to be experts in the field of mathematics by this time. It has been reported that they have been adding and subtracting at night, in their sleep, in the basement of the grade school.

It appears that Mr. Estes has brought some real workable students to the school (extra work). Wonder if Miss Bonnie Blair hasn’t begun to profit by it? Well that’s one Blair that has an eye for business. Keep it up, Bonnie; we knew all the time that you would make a real teacher.

All boys are looking forward to our next meeting Thursday, Dec. 17, which will probably be a party. One of the members of the sophomore class, Fernoy Mosgrove, has been sick for quite a while and we are all looking forward to his return. The auto mechanic classes, which are being held in the Future Farmer workshop, will discontinue on Friday Dec. 11. There will be a welding school starting in the near future.

The part-time and evening schools, which are taught by Mr. Estes, will end in the near future.

The WHS lunchroom opened on Monday, Dec. 8, 1941, and noon-day meals were served every school day from the former date until the last week of May, 1942. During the summer season of 1942, the lunchroom workers supervised the raising of a garden and the canning of the products. These women worked long and faithfully during the sultry summer days and in September they turned their thoughts to the improvement of the kitchen and dining room. Between the 1st and the 21st of September innumerable changes were undergone. A partition between the rooms was taken out; additional tables soon occupied the extra space. A spacious linoleum was laid on the floor and the walls, tables, benches and other articles were freshly painted. New window screens were put in and a new stairway was built. Many new cooking utensils were bought and a new refrigerator has been purchased. These numerous improvements greatly added to the lunchroom and on Sept.21, 1942 lunches once again were served. These wholesome lunches consist of a variety of tasty foods. The meals are always appetizing and very nourishing. An average of 240 lunches are served each day and 60 of these are given free to schoolchildren in the community who otherwise would not have a noonday meal.

There are now eight women employed in our lunchroom and these workers are under the expert supervision of Mrs. Anna Creech.

Some boys are thinking of getting married before being drafted. Wonder what Paul and Pat’s plans are? Robert Hall can’t seem to make up his mind between Lothair and Mayking. When a senior goes hog- wild about a freshman, you may rest assured that a real case has actually developed. So is the case of Paul Edmiston and Pansy Day. Wonder what was wrong with Tommy when he fell down the 15-foot elevator shaft? Could it have been that our good little boy is beginning to turn naughty or wait the first one you had ever seen, Tommy Gish? A rumor has been going around that Pvt. Bill Amburgey almost got around to popping the question to Juanita Hogg, but it seems to have “Gone With The Wind” after being advised by a teacher. Why is it that Sherman Jr. makes better grades this year? Millie Hogg wasn’t the cause of the grades last year, was she, Sherman? It looks like the love affair between Jo Nell and Bobbie has slackened since the gas rationing. But Willene doesn’t seem to mind that. How about it, Keith? Who is the person that Marion O’Neal drives off the hill with? Could it be the same one who consistently calls her out of homeroom? You wouldn’t know would you, B.P.? We know all of you have noticed that simply charming jacket Ruth Edminston has been wearing each morning, but no one has been able to figure out where she got it. (do you know, Kiethel?)

(The above articles from the December 1942 Black Kat Newspaper.)