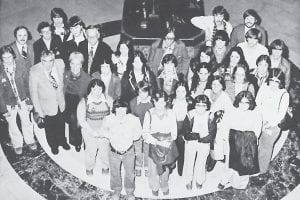 The Government Classes visited Frankfort to tour the capital and the Kentucky General Assembly.

March 4, 1978, Mr. Ison’s American Government Class and Mr. Henrikson’s class had the privilege of going to Frankfort to tour our lovely capital and while there witness the General Assembly in session.

The group was very excited at the prospect of seeing the legislature at work, and hoped to see some of our state representatives.

We had just arrived when we met our guide, Jimmy Brown, a graduate of WHS who now is an aide to U.S. Senator Huddleston.

He then led us inside the capitol where Representative Hoover Dawahare was waiting for us. Mr. Dawahare welcomed us and posed for several pictures with us.

While posing for our pictures, Lt. Governor Thelma Stovall and our Senator, Kelsey Friend, went by.

On learning that we were from Whitesburg, they posed for several pictures and invited us to visit the Senate.

Later, we met our other Representative, Bill Weinberg, who also stopped from his busy schedule to greet us and have his picture taken with us.

While in the House Visitors Gallery, the Gentleman from Letcher County, Rep. Dawahare had us recognized by the speaker.

Our next stop was the Governor’s office were we found out that we were going to get to meet Governor Carroll in his private office.

Two weeks ago that was the question. But now we know the answer. Yes, there is going to be a one-act play presented at WHS on April 27 and 28.

This project was and is an undertaking of Mr. Jon Henrikson and Charlie Engle. They got the idea and hurriedly tried to get it together. One week of valuable time was lost because of not having a proper script, but a miracle happened. “Riders to the Sea” jumped out of the pages of a book of one-act plays and these two confused, halfcrazed, theatre maniacs grabbed it. 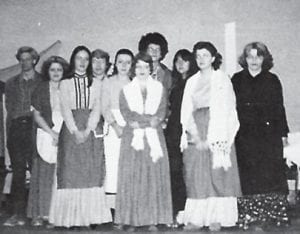 Pictured is the cast of “Riders to the Sea”.

The major objective of the play is to get people interested in drama and in the future for a Drama Club and Theatre Department to exist at WHS. Charlie is only substituting and will return to college this fall, but Mr. Henrikson will still be here to keep it going.

Wednesday, April 12, WHS was honored to have the Christian Athletes in Action sponsored by Camp Nathanael at our school. They are a Christian basketball team that goes to the different schools and shares with the student body what Christ means to them.

The cheerleaders would like to thank their sponsors, Phyllis Barker and Bob Polly, for their help, time, and patience. The A-Team cheerleaders will compete on Saturday, March 11, in the regional competition at Hazard.

Here is the Jacket Basketball team for 1977-78 and a comment of each by Coach Jackson.

Randy Collins, leading scorer returning from last year. He has improved a lot and I’m expecting a lot out of him. Gary Hall, most improved person on the team from last year because he worked hard in the conditioning program. He will be a big asset to the team. Daniel Ingram, Daniel should play a lot this year and will help the team if he continues to improve. Greg Sexton, Greg is the kind of guy you like to have on a ball club because he gives 110% all the time. Greg Creech, leading scorer on the B-team last year. He has worked hard, in the best condition and could be a starter if he puts his mind to it. Bill Witt, point guard. He will run the offense and direct plays. There will be a lot of pressure on him and I’m expecting a lot out of him. Jeff Gose, gives 100% all of the time. He does a lot of things well, good team player, and probably the best defensive player on the team. Bobby Roe, only sophomore on the team. Will help us next year and the year after. Greg Thomas, good shooter but needs to work on strength. He will help the team this year. Steve Holbrook, could help the team if he puts his mind to it.

The Harris Award is named in honor of Professor H.H. Harris, who served as Principal of WHS from 1919 until 1927. It is awarded to a senior boy by the faculty on the basis of leadership, character, and scholastic standing. This year’s recipient is David Horn.

The Dugan Award is an award named in honor of Miss Ann Dugan, who served as the Home Economics teacher for 27 years at WHS. The award was first presented in 1966 and is awarded to a senior girl on the basis of character, scholastic standing and leadership ability. This year’s recipient is Shirley Thomas.