Dreams are something that very seldom come true. 1983 was the result of a fouryear dream come true. A team of young ladies (most of whom were in grade school four years ago) who have dedicated themselves to being the best that they could possibly be. Endless hours of work have brought pride, tradition, and fame to a team most folks didn’t even know existed.

During a four-year building program the freshmen (’79 and ’80 school year) saw a winning season for the first time in the schools girls’ athletic (basketball) history. As the years moved by the losses decreased and the wins increased each year.

After three wins in the state tournament, the dream that was so unreasonable for so many years was now a reality —Whitesburg Lady Yellowjackets in the Sweet 16 State Finals. Through three quarters the score was tied. The ultimate dream was still in sight. Even in the fourth quarter Whitesburg was leading by two. But the ultimate wasn’t to be. The final result left the Lady Jackets State Runnerup. A proud but humble group left Richmond as a State Runner-up on paper but a true champion in the hearts of thousands of fans. Though graduation we will send four young ladies on their way to bigger and better things in life. Don’t think for a minute that they will ever be forgotten, because they won’t. Good luck, Tiphanie, Thelma, Damaris and Tish. God bless you all. 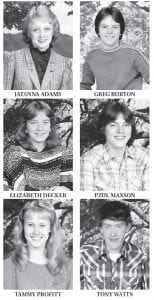 Mrs. Brown, who presented the award, said that the committee had narrowed the nominees to three students, Tony Sergent, Mark Bates and Tiphanie Bates, when they decided to award the trophy to the brother and sister. The award was given on the basis of athletic and scholastic achievement in addition to character and community involvement of the athlete. It is awarded to a senior athlete each year.

Mark Bates won the Dawahare Trophy for boys, the Offensive Baseball Award with a .329 batting average, the Most Assists Award in basketball while playing only half of the season due to an injury, honorable mention in the state football awards, as well as all EKMC and All Mountain Coal Conference.

Baseball coach Buddy Roe reflected on his 21-6 season before recognizing his team members and awarding his two awards; the offensive went to Mark Bates and the defensive went to Senior Catcher Bobby Pike. Roe also mentioned that 2 or 3 of his players will sign to play baseball in college.

Boys’ basketball coach A. H. Holbrook spoke briefly about his first year as WHS basketball coach. He stressed the importance of the freshmen and B-Teams and complimented Assistant Coaches Rick Adams and Fred Holbrook on their job. The B-Team finished the season with a 21-4 record as well as the District B-Team Title.

Speaking about the varsity team, Holbrook said that he felt that they had a good year.

The basketball awards were won by Tim Smith for Best Free Throw Percentage with a 75% average at the line; William Reedy for Best Field Goal Percentage; Donald McCall for best Rebounder; Mark Bates for most assists; and Donald McCall was named the Most Valuable Player.

Cross Country and Track Coach Eddie Holbrook gave out the awards for both girls’ and boys’ teams.

He recognized the boys’ cross country team “as one of the finest in the state” as they placed three team members in the top 20 in the state meet and did well in meets in Virginia, Tennessee, and Kentucky.

Monick Wampler was recognized as the two-time all state and three-time all regional champ in girls’ competition.

WHS Principal, R.T. Holbrook was presented with a plaque by Coach High that will be placed next to the girls’ state trophy that is in memory of the three young men who lost their lives in the car accident after one of the regional tournament games.

(The above article from the May 19, 1983 Letcher County Community Press.)