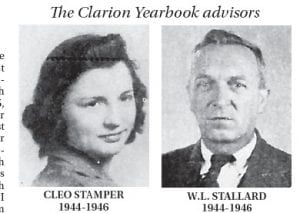 A brief history of the WHS Yearbook

According to an article that appeared in the first edition of the WHS newspaper, “The Black Kat”, which was dated September 1925, the senior class of that year planned to publish the first annual for the school. After conducting research consisting of reading through Mountain Eagle newspapers of that year, and talking with older citizens of the county, I have not been able to confirm or deny that they were able to actually publish a yearbook.

WHS did publish an annual in 1944 under the direction of Mr. W.L. Stallard and Miss Cleo Stamper. The name selected for the yearbook was “The Clarion”, which means “a call to greater heights”.

An interesting fact about this annual was that the 1944 Clarion had different colored covers. Some of the annuals were printed with a blue-colored cover, while others were in an orangecolored cover. The Clarion was published again for the 1945 and 1946 school years. As of now, I do not have any evidence that the school published a yearbook for the years 1947-1954.

During the week of May 16, 1946, the second edition of the Clarion arrived from the printers and the staff ran an advertisement in The Mountain Eagle announcing its arrival. The ad read as follows: High School Annual Off The Press. This week WHS received their new annual from the printers and it is really a beautiful record of the activities of the school and of the faculty and students throughout the year. The price of the annual is $2 and anyone desiring a copy may do so by seeing W.L. Stallard, Sr. or any of the high school students. Mail orders will be accepted.

The school year 1955-56 brought another gap in the publishing of a yearbook for WHS. According to Mr. Kendall Boggs, Principal of WHS, the faculty was concerned that the slow economy in Letcher County at that time may not support the advertising needed or the sales required to produce a yearbook. So the decision was made to skip that year and the school was able to resume publication of “The Yellowjacket” for the 1956-57 school year and published an annual each year until the school closed in 2005.

One of the first major changes to the Yellowjacket came in the 1974 edition. Up until this time, the annual had to be completed and mailed to the publisher around the middle of February in order to have the book available for sale before school ended. This automatically created a problem in coverage, in that most of the events of the second semester could not be represented in the yearbook. The staff decided to assemble a 16- page supplement that would begin where the yearbook left off. It covered the 53rd District basketball tournament, and the remainder of the basketball season; baseball, the senior trip picture, girls’ track, the band concert, the Junior-Senior Prom, freshman orientation day, the Athletic Banquet, and the senior awards day, as well as the Valedictorians and the top 10% of the senior class. This supplement was sold at the beginning of the next school year.

The Yellowjacket covers consisted of three basic colors: black, white and orange, or a combination of these from 1955 until 1975. It was the 1976 edition that broke new ground. This cover was brown with an eagle pictured on the lower half, along with stars in each of its claws. ‘Whitesburg High 76’ in gold letters was on the upper half. This cover was selected in honor of our nation’s bicentennial birthday. It also included a 16-page special section on the history of WHS, which consisted of a page from the first “Black Kat”, the school newspaper dated September, 1925, as well as pictures of the Glee Club from the late 1940’s; a Junior-Senior Banquet from the 1950’s; the 1957-58 football team; the 1962 variety show, “Faculty Frolic” as well as other pictures of former students and faculty.

The 1963 Yellowjacket was the first edition to use what is known as “spot color”. It was used on the opening page and consisted of a full black background with orange writing and a picture of a yellow jacket printed in orange. “Full color” first appeared in the yearbook in the 1971 edition. This was a full-page color picture of the old high school building taken from the English building side. This was the building that was demolished in 1985 and the area was later turned into a parking lot for the school.

The 1978 Yellowjacket broke new ground in two areas. It was the first edition to have the senior portraits in full color and also to cover the entire school year. This meant that the book would be finished a week or two after the school year ended and would be distributed at the beginning of the next school year. This allowed for all of the second semester events to be included, making it a true “yearbook”. Of course, the disadvantage, especially to the seniors would be that they would not be able to have their book signed by their classmates. Several of the members of the class purchased the autograph book sold by the school picture company as one solution.

The last edition of “The Yellowjacket” (2005) included 16 pages devoted to a brief history of WHS. It included “A Soliloquy of the Old High School Building” written by Nora G. Boyd; Miss Virginia Vermillion’s first grade class of 1944, which graduated from WHS in 1956 written by Eloise Reynolds Selzer; a picture of the 17 principals and the years that they served; as well as pictures of past students, groups and organizations. With the closing of WHS in 2005, the staff of the last “Yellowjacket” closed the book with this message: