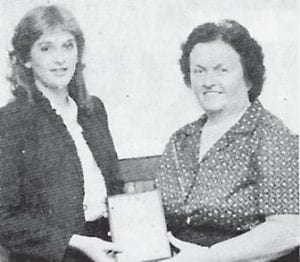 The first Thursday of the school year, Aug. 15, was witness to what will hopefully become a common occurrence at Whitesburg High School. It was a combination picnic and pep rally held in order to celebrate the opening of the 1985 school year and football season. There was a $2 fee to cover the cost of the hot dogs and soft drinks.

The activities were many and varied including a softball throw, horseshoes, 40-yard dash, egg throwing and catching contest; tug-of-war, with a grudge match between the freshmen football players and the cheerleaders, and the last event was a vicious volleyball match between the faculty and a team representing the student body. The evening ended with the pep rally, at which time the new principal and faculty members were presented with “Jacket Pride” t-shirts.

The faculty turnout was outstanding and students’ attendance was estimated at two hundred.

This outing provided the chance for a more relaxed atmosphere between the students and faculty, and a chance for students to socialize without the rush of everyday school-life.

Deemed a success by everyone there are plans for another one, probably free of charge, in the near future.

Aug. 12 through the 16th is the first week of school at WHS. The first day everyone was excited.

On Tuesday, the freshmen came to school and the halls became crowded. By Wednesday, everybody was excited about the big picnic on Thursday. The first football game was on Friday night and the school proved that it was more of a family this year by everyone’s pulling together to support the team. The real feeling of Jacket pride on the hill this year is everyone looking out for everyone else.

There is an overwhelming majority of seniors wanting to get back to the old basics of school pride. “An eye for an eye and a tooth for a tooth.” WHS is no longer a school — it is a family.

The Annual Quicksand Area 4-H Leadership Recognition Banquet was held on the evening of Sept. 30, at Quicksand. The program was sponsored by the Quicksand Area 4-H Leaders Council and each year the eight counties which comprise the area, recognize two outstanding 4-H supporters or club leaders for their contributions to 4-H. A new award was added this year-the naming of an outstanding teen leader.

“Letcher County’s Teen Leader Award winner joined 4-H at the ripe old age of 9, six years ago. She made a poster that year and was named county winner for her grade group. As a 10-year-old, in 1980, she won a blue ribbon for her 4-H speech on ‘Electronics’, exhibited her first-year crochet project at the Kentucky State Fair, and was treasurer of her 4-H club at West Whitesburg School. 1980 was also the year she became interested in the 4-H Vegetable Judging Contest. This event has continued to hold her interest. As a result, this year Beth Banks won Grand Champion at the Kentucky State Fair and is a member of Kentucky’s Vegetable Judging Team, which will represent the state at the national contest, Oct. 25-28.”

WHS Drama Class will present and perform three Christmas plays at the Appalshop Theater in Whitesburg on Saturday, Dec. 21.

The plays to be performed are “The Mummers Play”, as collected by Richard Chase, “The Little Match Girl” by Hans Christian Anderson, and “To Catch a Clause”, by Jeff Hawkins.

Following the performance will be Christmas carols and refreshments. Santa Claus will be present to visit with the children in the audience.

The food collected will be used to make up food baskets that will be distributed throughout the county for the holidays.

Codell lifted in the 130-pound class and also did very well.

Mark, along with winning these events, set three state records for his age group.

This year WHS’s W-Club has elected new officers with Rondall Baker as President; Michael Jackson as Vice-President; Stephanie Plymale as Secretary; Scott Adams as Treasurer, Melissa Reedy as Public Relations; and Wendy Williams as Work Chairman. The W-Club has become a Pep Club also, and many fundraising activities have been planned.

This year WHS’s French Club has recruited 24 new members, which were initiated the last week of October. Their initiation consisted of dressing up in the national French colors, giving candy to the present members and wearing a sign around their neck for three days. At the last meeting the following people were elected as officers: Carmella Webb, President; Stephanie Plymale, Vice- President; Debbie Imperial, Secretary; and Broy Dollarhide, Treasurer. Plans were made for a Christmas party, secret angels, and caroling.

(The above articles from the 1985-86 Black Kat Newspapers and the 1986 Yellowjacket Annual.)