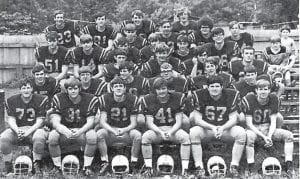 CHAMPS — The Whitesburg High School football team defeated Belfry for the E.K.M.C. championship and the first winning season for the Whitesburg Yellowjackets in four years.

Whitesburg defeated Belfry Saturday night on October 30th, to claim the E.K.M.C. championship and corral a winning season for the Whitesburg Yellowjackets for the first time in four years.

The game opened with the Belfry offense driven back to their own five and forced to punt. A bad snap from center forced the punter to run out of the end zone where he was tackled on the five. This gave the ball to the Whitesburg offense who with an inspired effort took the ball over on a Danny York run. The game then settled down to a defensive duel as neither team could score. In the fourth quarter a 6-minute drive with Danny York scoring once more, brought about the ultimate margin of victory and made the final score 14 to 0.

The seniors, realizing that for the first time, a winning season was in their grasps, played with fiery determination. A lot of credit goes to these boys for their outstanding efforts. We of the Black Kat staff would like to recognize them. They are Bill Howard, Gary Mullins, Carl Breeding, William McCool, Tony Baker, Danny York, and Ray Fields. 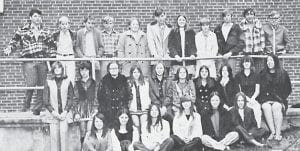 The second period American Government Class of Whitesburg High School, under the leadership of their teacher, Mr. Larry Ison, took over the city Government offices and County offices in the Courthouse on Friday, November 19.

This is an annual affair sponsored by the local Rotary Club.

The Whitesburg High School Chapter of the Distributive Education Clubs of America (DECA) joins the state and national organization in celebrating March as national DECA month. This month is set aside to call attention to the only youth organization operating through the public schools to attract young people into careers in Marketing and Distribution.

Projects this year for our local chapter have been to enter a float in the Homecoming Parade; to purchase DECA jackets and sweaters, to conduct a candy drive, to enter the Regional Contest at London, Ky. We are now planning a toy drive for the children’s ward at the Whitesburg Regional Hospital and also a dinner for all of the club members.

At the end of the day, all of them were exhausted but happy that they got the experience of being a teacher.

More of the Class Will

Frenda Anderson wills her ability to write love letters to Wade Kirkland. Verna Kaye Bailey wills her hair and big brown eyes to Mary Breeding. Johnny Banks wills his beard and sideburns to Marion Gilley and hopes that he will wear them well. Cleda Cornett wills all of her good luck with boys to Kaye Young. Charles Hatton wills his ability to do successful detective work at late hours of the night to Burl Combs. James Allen Maggard wills his excellent eye for girl watching to Ivan Whitaker. William McCool wills his ability to tell jokes in class to Francis Day and Mike Polly. John Palumbo wills his athletic ability to Craig Campbell. Darrel Raleigh wills his mechanical and electrical ability to Paul Collins. Billy Rose wills his art talent to Roger Gilliam. Don Hogg wills his English IV book to anyone who would have it. Randy Holbrook wills his hair to Tony Wampler. Bill Howard wills his position in football to William Holbrook. Gregory Lucas wills his bad luck to Vinson Wynn. Darrell Martin wills his ability to pinch Mickey Mouse’s nose to Johnny Collins. Carolyn Parsons wills her common sense to Judy Adams. Linda Pigman wills her ability to go to town during class to Janet Smith.

The one hundred fifty Whitesburg High School seniors marched proudly in caps and gowns down the aisles of the First Baptist Church of Whitesburg on Sunday, May 21st. The event started with the invocation given by Rev. Leon Wesley. The choir provided special music singing “Honor Him, Sing Alleluia”, and “The Lord Bless You and Keep You”. Rev. Jim Erwin delivered the address and Rev. Bill Mackey the benediction. Last of all, with smiling faces, the senior class marched proudly out.

Whitesburg High School’s band embellished the atmosphere at Pikeville, Saturday the 22, with a superior rating in the State Music Contest.

The band played Rhapsody Episode by Carter; and Overture in B Flat by Giovinnini. Miss Breeding attributed their overwhelming success to “hard work on the part of the band students and me, involving many hours after school”.

The band and Miss Breeding have been arduously practicing from the opening of the second semester for these contests.

The next Band Contest is May 3rd in Williamsburg at Cumberland College.

A somewhat startled group of students have a new bus driver. A lady bus driver! Mrs. Janice Fugate who hails from Cram Creek is driving bus number 2, Craft’s Colly and Sandlick. Mrs. Fugate has been driving buses for some three years now. She drove for St. Johns Bus Company in Dayton, Ohio for two years, prior to returning to her hometown of Whitesburg.

The Kat ask Mrs. Fugate why she began driving a school bus: “I’ve always liked to drive, and when I came back here I didn’t have the educational experience to become a secretary and besides this allows me to be with my children most of the time and make a little money.” Mrs. Fugate stated she was not part of Women’s Lib. Just the same, the best of luck to Mrs. Fugate.

(The above articles from the 1971-72 Black Kat Newspapers and the Yellowjacket Yearbook.)