Suzanne Adams, head of the Suzanne’s School of Dance in Whitesburg and Hazard, presented an extravaganza at Whitesburg High School entitled “The Atomic Darlings of 1955”. Many dancers were presented, but the ballet corps shown above took down the house.

Little did the community of Whitesburg dream that their school faculty held such dramatic talent until last Thursday when they presented “Atomic Darlings”, featuring the entire faculty of WHS. In fact, the public praised them so highly they had to give the performance three times so that everyone might be able to see it.

Announcer for the program was Mrs. Stephen Combs Jr., dressed as you might have seen her in years gone by, making each member so interesting that the audience could hardly wait until the curtain rose. The program was as follows:

Famous Rhythm Band under the direction of attractive little Rachel Ann Bach, who had been having private lessons from local band mas ter Jack Taylor. 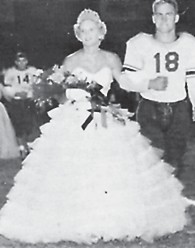 HOMECOMING — Margaret Day was the first homecoming queen at Whitesburg High School. She was escorted by Buddy Fields, captain of the football team.

Folk games by members of the high school faculty, costumes made by home economics class under the direction of Miss Ann Dugan.

Famous soprano Vi Moore, yes you guessed it, sings, “A Good Man is Hard to Find”.

Little Lonnie Breeding much interested in dramatics, presented “Cinderella in Red”, telling just how students should act when appearing on the stage.

Duet, “For Me and My Gal”, Ed Moore and Jackie Owens, portraying the gay ‘20s in costumes and manners — and were they a hit!

“Butcher Boy” mountain ballad brought to life by Hugh Adams — or was that the radio turned on WTCW?

Most outstanding was “I’d Rather Die Young” by Little Miss Oma Fields who didn’t look a day over 12 and was cute in her little pinafore.

Homing quartet by four members of the matrimonial squad, Virginia Vermillion, Rachel Back, Patsy Fields and Ruth Rice. We hope their desires will be fulfilled.

A lesson with a fan — Little Virginia Combs who displayed experienced talent.

“Romeo and Juliet”, Jack Taylor and Pasty Ann Fields, who were perfect in bringing this immortal classic to life. “Charge of the Light Brigade”, a ballet number composed of six little girls, Pigman, Caudill, Enlow, Boggs, Moore, and Boyd and one boy, Little Bill Collins.

After seeing the program, one is led to believe: No printed page nor spoken plea/Can teach young hearts what/Men should be/Nor all the books on all the shelves/But what the teachers are themselves.

(The above article appeared in The Mountain Eagle March 4, 1954.)

On Friday, Oct. 8, Whitesburg High School will observe its first homecoming. The highlight of the evening will be the Whitesburg vs. Lynch football game at which time the football queen, Miss Margaret Day, will be crowned. Her attendants will be Kaye Moore, Elizabeth Blair, Nancy King, Shelbia Mullins, Arlayne Collins, Walleen Enlow, Chelsia Hall, and Donelda Breeding. The queen and her attendants were chosen by the football team.

The festivities of the day will begin at 1 p.m. with a parade through Whitesburg led by the Whitesburg High School Band, featuring the queen and her attendants and as many floats as care to enter the competition. The most outstanding float will receive a $15 prize and the second prize will be $10. It is hoped that there will be numerous floats entered in the parade. Anyone wishing to enter will please contact the committee.

During the half-time, the WHS Band will present a program honoring the queen and her court.

Immediately following the game there will be a homecoming dance. The Whitesburg Hep Cats will furnish the music. Admission will be 50 cents a couple or 25 cents per person. The place will be announced later.

Carolene to Tommy – “My Heart Belongs To You”; Harold Cook to Rusty – “Show Me the Way To Your Heart”; Phillip Back to Donna S – “If I Give My Heart To You”; Paula Short to Hobart Cupps – “Breaker of Hearts”; Branston to Anna Lois – “Hearts Made of Stone”; Harlan Collins to Mary Lynn – “Let Me Call You Sweetheart”; Ardath to Ben Arnold – “Hard Hearted”; Janet to Tray – “Heart and Soul”; Arlayne to Darrell – “Heart of My Heart”; Julia to J.W. – “Your Cheating Heart”; “Choker” to Wigg – “Talk To Your Heart”; Nancy to Jimmy Paul – “Heart Breaker”; Burkie to Vennie – “Where is Your Heart?”; Margaret Moncrief Combs to Warren Gene – “Sweetheart of All My Dreams”; Ronnie to Ramona – “Good Night, Sweetheart”; Carla Lou Webb – “In the Lobby of Your Heart”; Phyllis Stamper to Richard Adams – “Here In My Heart”.

The Yellowjackets won over the Camels of Campbell County. They gained an early lead and were never behind during the game. There was fine team work and good sportsmanship for the Yellowjackets. Buddy Fields was top scorer with 17; Wig 10; Vernon 8; Rex 8; Bert 4.

The Yellowjackets had set in their minds to win this game and when they say they are going to win and really set their minds to it — the team they are playing better not doubt their ability, because it was proved in this game. They kept the lead all during the game. In this game it was shown that the team is doing better and fighting harder. We are with you, team, all the way, so fight and we will support you. Top scorer was Wig with 18; Bud 15; Rex 15; Vernon 7; Bert 7.

The Whitesburg Yellowjackets dropped a decision to the Breathitt Bobcats 51-42 at Jackson to end a four-game win streak. The local team didn’t look as sharp as seen in previous games, although they jumped to an early lead and managed to lead by two points at the intermission.

The second half was dominated by the Bobcats and the lack of rebounding power on the part of the Jackets was sorely felt. Top man for the locals was Bud with 14 points, followed by Wig 10; Bert 2; Rex 4.

(The above article was from the February Black Kat.)