FHA is also working on a dessert cookbook. Anyone wishing to submit a recipe contact Lola Hall, Jena Combs, or Stephanie Mullins. The cookbook will be available in April.

Monday, Nov. 24, the Math Club initiated two new members. The two were Jennifer Stephens and Angie Hatton. This year’s initiation consisted of dressing up as their future occupation, wearing the quadratic formula on their foreheads, bringing their lunch in a lard bucket, eating on the cafeteria floor, and bringing a sixinch ruler for calculations. 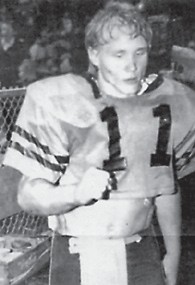 This year Mrs. Barker has got some girls together to form a Pep Club. It consists of all girls. We will try to go to every boys’ ballgame, home and away.

This is the first year in some time that WHS has had a Pep Club. Along with the cheerleaders, we will help cheer our basketball teams to a winning season.

Our Pep Club is working on having matching sweat suits. We do need your support, so come on and join us and support your team.

Whitesburg, now 4-1 overall, scored on the game’s opening drive. The Jackets drove 71 yards with Matthews running in a 3-yard touchdown for their first score. Keith Sparks then kicked the extra point with Whitesburg leading 7-0 with 5:55 left.

With only 1:27 left in the first half, senior Anthony Pray returned a 33-yard that Dale Thomas punted 20 yards to the Whitesburg 36-yard line. Navajo quarterback, Gillum, passed a 23-yard touchdown. Napier then kicked the extra point to tie the game 7-7 at halftime.

In the fourth quarter, Matthews burst around the end to score again. Then Thomas passed to Jenkins for a two-point conversion, this gave the Jackets a 21-7 lead with 5 minutes left in the game.

With just seven seconds left, Whitesburg turned a flea flicker into a 29-yard touchdown pass to Tony Casolari. The game ended with the Jackets 27 and the Navajos 13.

Whitesburg boys’ cross country team traveled to Kingsport, Tenn., on Saturday, Sept. 26. The boys finished in tenth place in their performance. Chuck Wagner finished first from Whitesburg, with an 18:09 time in the 3.1-mile race. The second and third place finishers from Whitesburg were Ricky Seals and Jeff Bledsoe.

After the big meet in Kingsport, the boys then went to Covington with 25 schools in the meet. Whitesburg finished 15th overall. Again, Chucky Wagner finished first, Ricky Seals second, and Jeff Bledsoe third.

The Letcher County JROTC recently took a trip to Ft. Knox. We took 20 cadets from Whitesburg and 20 cadets from Neon and Letcher plus supervisors, giving a total of 44 people. We departed from the school hill at 7:30 a.m. Thursday morning, Nov. 6 and returned Nov. 8. The trip was designed to show cadets how the army operates, in hopes of getting some graduating seniors as they went through basic training and also watched military police train their dogs. We stayed in barracks and ate in the mess hall, and got up at 5:30 a.m. every morning.

The JROTC went to a tank lab and saw how to repair tanks. We got to see the newest military tank, which is equipped with up-to-date electronics. We went to Godman Airfield where we saw helicopters taking off and landing. We watched a pilot as he practiced flying in flight simulators.

The cadets were taken to the Tahoe Club where there was a dance, which was the highlight of the trip. The following day, we visited the Patton Museum where cadets saw General Patton’s Jeep and many tanks. Then we visited the Post Exchange where military personnel shop. Finally we arrived home at 8 p.m. Saturday night.

The Quick-Recall Team will be traveling to Louisville Nov. 21, to compete in the First Annual Holiday Invitational Academic Bowl.

(The above articles from the 1987 Black Kat Newspapers and the Yellowjacket Yearbook.)