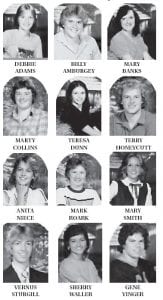 The WHS squad stayed at the Holiday Inn in Columbia. Jennifer Noble celebrated a birthday during the trip. The other Whitesburg cheerleaders sang “Happy Birthday” to her at a Pizza- Hut restaurant.

Jennifer received a very unusual birthday present. She was in the lobby of the motel when she saw the stage crew of The Doobie Brothers, who performed the night before in Columbia. One of the roadies told Jennifer that if she and the other cheerleaders waited around long enough, The Doobies would pass through the lobby. And of course, they waited.

WHS cheerleader Brenda Williams was taking a ride in the elevator when she realized that the lead singer of The Doobies was also taking a ride in the elevator. Brenda ran up to get the other cheerleaders and they crowded into the lobby. They talked to some of The Doobies and got their autographs. Some people have all the luck. Sports — Whitesburg ties

The Eastern Kentucky Mountain Conference was held Dec. 1 at the Elkhorn Country Club. Pikeville, Elkhorn City, Wheelwright, Fleming-Neon, Jenkins, and Whitesburg are all members of the Conference.

In the Jenkins Invitational Tournament the Whitesburg Yellowjackets were defeated by the Fleming- Neon Pirates. The game was played on Tuesday night, Nov. 25.

The Whitesburg Yellowjackets were defeated by the Jenkins Cavaliers on Wednesday night, Nov. 26. The final score was 52-50.

The Whitesburg Yellowjackets defeated the Owsley County Owls at their first home game of the season. The game was played Friday night, Nov. 28. The final score was 58-53.

Greg Hogg led the Jackets in scoring with 26 points and also led in rebounds with eight. He was also best team player along with Mark Bates, who had 14 points.

Best defensive player, Stephen Kincer, also had 14 points, followed by Mike Watts with two points. Randy Frazier and Robbin Roberts each had one point. The Jackets completed 20 of their 33 free throws.

The Whitesburg Lady Jackets played their first home game on Nov. 24. Victory for Whitesburg was the outcome of the game with a final score of 60-55.

At the evening banquet, awards were presented. Teresa and Kim tied for second place on the test and received a plaque. The math team won the first place team award by having the highest total of scores.

Each student had a fun day and was excited about the victory.

An all-county marching band was formed by members of the Whitesburg band as well as Fleming-Neon, Letcher, and one member from Jenkins. All of the members worked very hard and their efforts paid off as they performed a marching show.

The show was performed once at Neon and twice on our field and the band came on the hill and played their music for all of the high school students.

Even though everyone worked very hard, everybody seemed to have some fun too. They all hope that the all-county band is something that can become a yearly event.

All of the graduating seniors received a “W” award for their participation in the school’s athletic programs. Awards were given by the coaches to the athletes in each sport, as well as three overall awards.

The Dawahare Award given to the male and female athletes who contributed the most to the sports program during their four years of high school, went to Greg Hogg and Paula Warzon.

For the first time ever, the James R. Brown Memorial Award was given to a girl, Nancy Huff. Miss Huff received the Brown Award for her outstanding leadership, scholastic ability and character.