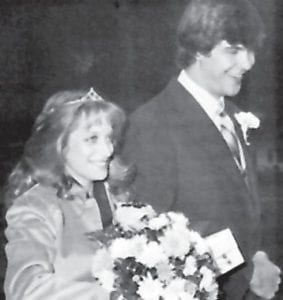 Dottie Fields was chosen Homecoming Queen on Oct. 23, 1981, by the student body of Whitesburg High School. Dottie is the daughter of Mrs. Ann Fields of Whitesburg. She is actively involved in cheerleading, FCA, FHA, and the Pep Club. Dottie’s escort was Mark Cornett, son of Mr. and Mrs. John Cornett of Ermine.

The Queen Candidates are Linda Breeding and Jennifer Noble. Linda is the daughter of Harold and Judy Breeding of Whitesburg. She is actively involved as the Statistician for the girls’ basketball team. She played basketball for two years and was a member of the Fish and Tackle Club last year. Linda’s escort was Randy Frazier. Randy is the son of Mrs. Shirley Combs of Rockhouse.

Jennifer Noble is the daughter of Charles and Pearl Noble of Craft’s Colly. She is actively involved in FCA, Student Council, and cheerleading. Jennifer’s escort was Bert Bradshaw. Bert is the son of Mr. and Mrs. Carter Bradshaw of Mayking. 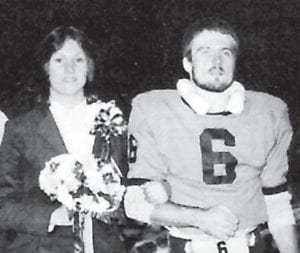 Rocky Craft has won the area essay contest sponsored by the Kentucky Commission on Employment of the Handicapped.

Rocky is a 16-year-old junior. His parents are William and Oneida Craft. He lives on Cowan Hill and enjoys playing guitar and hunting. His essay follows:

In our Space age society, taboos are being eliminated each day. Women in the United States Army, blacks leading political life, and disabled people at work are examples of our modern society. Every day, disabled people lead active, competent lives. Still many prejudiced people show a lack of feeling towards these fellow Americans. Disabled people, for the last twenty years, have shown retaliation to these insults. For too long, handicapped people had been inactive. Many intelligent, skillful, disabled people have shown the world that they will not be denied. To assume that disabled people are not important is a faulty attitude. 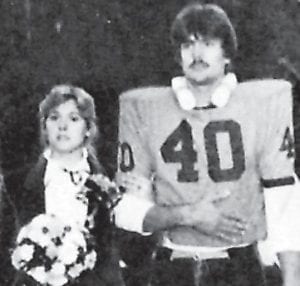 A few examples will show my point. On July 13, 1979, my brother James suffered an unbelievable accident. At seventy-five miles an hour on a slick road, riding a motorcycle, he wrecked. The motorcycle flipped three times upon a hill. James was thrown into a tree thirty feet high. His right leg hit the tree and wrapped around it, tearing every tendon in his leg loose. When he hit the ground, the force crushed the bone in his left leg. He suffered other broken bones in his arms and hands. At the Holston Valley Hospital in Kingsport, Tennessee, the doctor said, “Amputation is the only answer.” Fortunately, another doctor was called in from Washington, D.C. From the bone bank, a bone was placed in his left leg with a stainless steel pin through the bone. The tendons in his right leg were partially sewn back, but complete reconstruction was not successful. The doctor’s diagnosis was very disheartening. James would never walk again. 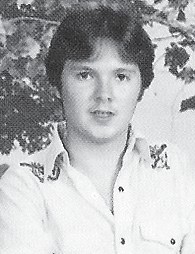 After six months, James Craft returned home. Strong determination, hope, and belief that he would walk again led him to his first step three months later. Working each day, hour after hour, he slowly regained feeling and strength in his legs. After walking with crutches for a month, he took the first attempt to walk by himself. The attempt was successful.

Now, after two years, he has regained his position as head repairman at Scotia Coal Company. By surmounting his handicap, he can now lead a normal life without shame or the fear of being insecure.

Another example of disabled people having strong determination is that of Cossie Quillen. In his early twenties Cossie decided to become a Boy Scout Leader. He and his troops went on a camping trip. On the mountain the troop was firing guns and having a nice time. A man, mistaking the troop for his neighbor with whom he had trouble over boundary lines, went upon the mountain to the troop. In recalling his accident Cossie said, “A man fired at the troop. It blinded me and left one boy dead.” After recuperating, Cossie decided that this was not the end. He founded the Quillen Drug, which has been very profitable. Only by Cossie’s perseverance did he achieve this goal. Now the store is owned by his son, but Cossie Quillen still remains active in the business.

Another example is Donald Adams. He is a receptionist at the Whitesburg Regional Hospital. From birth Donald has suffered from tight muscles and tendons in his legs, restricting him from straightening them. Being a receptionist, he must walk from office to office during the day. I asked Donald how this affected him. Courageously, he said, “The walking and sitting sometimes causes pain, but not to the extreme. The work keeps my mind off of the pain.” He has helped many handicapped people get a job at the WARH. Donald Adams has inspired other handicapped people in his work and in his social life.

At last, but surely not least, is the story of Marion Holbrook, who is a custodian at the Whitesburg High School. The many jobs which he does are not easy, for he is paralyzed in one arm. At birth he was a normal child. Unbelievable, but true, at the age of eight months he suffered a stroke. Marion finds his disability to be trouble.

The school lawn, which is on a hillside, is difficult to mow, but try mowing with one arm and using a regular power mower. For years, he has done his job efficiently. Not many could say this, but Marion can. Through all the hardships, he has reared a family and earned the respect of the staff and students at Whitesburg High School.

Though being handicapped puts one’s goal farther away, it still can be reached. For these four men; James Craft, Cossie Quillen, Donald Adams, and Marion Holbrook, these goals have been reached. For every disabled person in America there is a job, but only by strong determination and courage can these jobs be practiced with fulfillment. The disabled people have shown America the effectiveness of their work. Disabled people have reached a goal that many will leave behind. This goal is the ability to work and to feel pride in their achievement.

More of the Class Will

The major problem was nervousness, but everyone did well.

On April 1, two ensembles and Mr. Lester went back to Pikeville College to compete.

One ensemble was a clarinet quartet. The people who played were Karen Maggard, Betsy Adams, Marsha Bailey, and Carolyn McPeeks. They received a Division II rating.

The other ensemble was a trumpet trio. Jeff Maggard, Jane Masters, and Ricky Sparks played and they received a Division I rating.

(The above articles from The Mountain Eagle, The Black Kat Newspapers and the 1985 Yearbook.)