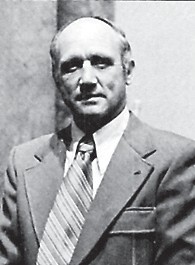 The following article was written by John Bastolla and published in his column “In The Press Box” in the Jan. 31, 1980 Letcher County Community Press.

Gose is a native of Letcher County. He was born on Linefork, went to school at Kona three years. His family moved to Whitesburg when he was in fifth grade and so began a career that would see him as a player and a coach for the orange and black of WHS. 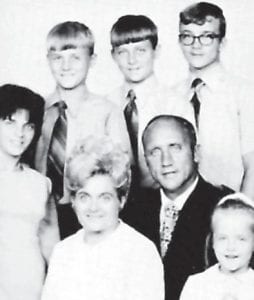 He started playing first string as an eighth grader. In eighth and ninth grade he was a quarterback, while as a sophomore, junior and senior he played all of the backfield positions.

After high school it was on to college. He spent about a month at the University of Kentucky under the legendary Paul “Bear” Bryant. But at 155 pounds it was more than most human bodies could stand with those monstrous linemen coming at you constantly and Gose decided to come back to the mountains. Later he was able to go to Morehead State University where he played under Ellis Johnson and Shorty Jamerson. After receiving his degree from MSU, he served as an assistant coach at Cumberland High School under Gardner Bates for a year. Then it was back to Whitesburg to be an aide to the late Ed Moore. After four years at WHS he moved to Paintsville where he assisted Walter Brugh for a year, then it was back to Whitesburg as a physical education instructor over the county as well as assisting with the grade school football program at Martha Jane Potter, Cowan, Whitesburg and Eolia.

Some of the members of the Class of 1981

After spending several years in the mining industry, he got his shot as a head coach at his alma mater.

In his first two years the Jackets won four games but since that time they haven’t had a losing season.

The orange and black have won the district title three times and the region once since the present setup went into effect four years ago.

As for who have been his most outstanding players he said, “I’ve had a number of them at different positions and rather than hurt someone by omitting their name I’d rather not mention any.” But one thing that he did mention was that everyone on the squad, including the boys on the sidelines, means something to that team.

Gose stated, “I’ve had the support of the people, school, parents, administration and Mr. Burkich. He was my principal for seven years.”

The coach brought out his philosophy as he said, “I don’t think you can have a great athlete without being a good person.” He shows an interest in the boys off the field as well as between the sidelines.

Like most coaches, he looks forward to the coming gridiron season. He certainly will have the numbers going for him as 49 upperclassmen will wear the orange and black for the ’80 season. There will also be 15 or 20 freshmen playing the pigskin sport at WHS.

He referred to his biggest thrill as “seeing young men go out into life and becoming good citizens and leaders in the community.” His low point is “seeing young men who have potential as great athletes not taking advantage of it.

What goal does he have? That was an easy question for him to answer as he said, “Try to produce better athletes and young men.”

He must be doing a pretty good job of it as several people have complimented him on his undertaking. Said Ozz Jackson, who has been serving as an aide to Gose with the football program along with being head basketball coach said, “I’ve worked for him for 10 years now. I’ve learned a lot of football from him. I’ve learned how to deal with different situations and people. The important thing about Coach Gose is that he is my friend. I have a lot of respect and admiration for him as he’s done a superb job with the football program at Whitesburg.”

Doug Chandler, also an aide to Gose in football commented, “He’s been like a father to me. He started me in football when I was in grade school. Really, there’s nothing I wouldn’t do for him. It’s like a dream come true to return to coach with him. I appreciate his confidence in me. He gives me a lot of responsibility.”

Eddie Holbrook, who also serves as an assistant to Gose as well as heading up the cross country and track programs at WHS, said, “I think he’s the most respected coach in eastern Kentucky. It’s hard to describe a man who has done so much for the school, kids and coaches as well. He’s more like the father figure to all of the kids. He’ll sit down and listen to them no matter where he is, in school, home or downtown. I think that’s why they respect him so much.”

A newcomer to the WHS athletic scene, John High, who helps with the gridders as well as being head girls’ basketball coach, commented, “One of the most predominant names as well as knowledgeable minds in high school football in this part of Kentucky would have to be Coach Gose.” He continued, “When I worked at Morehead and traveled to all the schools in this part of the state, Whitesburg High School and Coach Gose’s name always seemed to be the major topic spoken of when you talked high school football. I feel very fortunate to have the chance to work for such a fine and respected man as Coach Gose. He not only has the respect of all his peers, but has the respect of his community and school. He was my very highest respect.”

Gose is married to the former Carlene Webb, daughter of Critt and Ora Webb. They have five children including Jim Critt who is married to Janet Breeding. Nine months ago they presented the coach with a granddaughter, Sherry. Also in the family are Karen, a senior at Georgetown College who is married to David Hunsucker who is a senior at U.K.; Joe Pat, who is in Savannah, Ga.; Jeff Curt a student at Eastern Kentucky University; and Kaye, a freshman at WHS.

Gose complimented his better half as he stated, “My wife has been real considerate,” indicating she has been a morale builder. He concluded by saying, “She’s one of the finest women a person could ask for.”