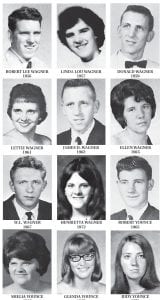 Last week marked the final week of school in Whitesburg. Following days of programs and ceremonies, the graduates were presented their diplomas Friday night, May 14. Mrs. H.H. Harris presented her class in instrumental and vocal music. The program was presented in a very beautiful manner, and was enjoyed by all who were privileged to be present.

Sunday night, the Rev. Earl Curry preached the Baccalaureate sermon at the Baptist Church. The sermon, which was carried in last week’s Eagle, was one of the best that has been given in this section.

Monday night, Mrs. Albert Jones presented her pupils in recital. The program consisted of songs by the boys’ and girls’ glee clubs, and the piano and expression classes. The players and singers entertained in a delightful way and a large and appreciative audience was present to enjoy the program.

Tuesday night marked the presentation of the senior class program.

Wednesday night, the eighth grade appeared on the rostrum as graduates from elementary school. Thirty-nine pupils, handsome boys and beautiful girls all in their early teens, were the members of the graduating class.

Their program opened with prayer by Rev. L.O. Griffith. Homer Shepherd was salutatorian. Thirtyseven others made short speeches, followed by Thelma Addington, Valedictorian. The class was addressed by the Rev. Earl Curry, who took as his subject, “Youth”. Rev. Curry gave much good and wise advice to the young graduates.

Following the awarding of diplomas, the class was presented to Prof. Squires who received them with appropriated remark. The program closed with the benediction by Rev. O.V. Caudill. Thursday night, the class play, “Oh Professor” was directed by Mrs. Jones and presented by the senior class. The play was a comedy full of surprise and close predicaments, played well and enjoyed by all.

Friday night, the seniors received their diplomas. They were represented by the honor students, Miss Rudell Fields as salutatorian and Mr. James Squires as valedictorian.

The class was addressed by Dr. E.E. Gabbard, president of Buckhorn College in a most delightful, intellectual and forceful manner. He took as his subject, “Work, Play, Service and Worship”. Dr. Gabbard is an orator born in the hills and educated in the best colleges.

The diplomas were presented by Arlie Boggs in a fitting short speech.

Rev. O.V. Caudill closed the services with the Benediction.

The Whitesburg schools will open Sept. 1. This being Labor Day, will be in session only half a day.

All children of the ages of six or over are required to attend. The enrollment will be large with over 100 in high school. The schoolrooms will all be crowded so children under age will not be received. Qualified pupils from any part of the county will be admitted to the high school. Each will be required to pass an examination in the common branches.

At the end of each month a report will be sent to parent or guardians showing the days the pupil attended, the grade of his studies, deportment, etc. Parents should see that these reports are brought home and returned promptly to the teacher.

Last year the school suffered from lack of heat and ventilation from causes which could not then be helped. This year a $4,800 vapor steam heat plant is being installed and will be ready by opening time. We can then keep the rooms warm even in zero weather, which will add to the comfort of the children and favor their proper development in every way.

Parents should urge children over nine years of age to study two hours or more every night. Home study report cards will be used to show how much time each pupil studies at home.

On Friday night, the Whitesburg Yellow Jackets swarmed on the Cumberland High School Redskins for a top-heavy score of 47-30 in favor of the Yellow Jackets. Junior Haynes again led the scoring with 20 points.

Several Whitesburg fans went to Cumberland with the team and joined our cheerleaders in some healthy yelling for the Yellow Jackets. Principal C.J. Reed and family were among the Whitesburg boosters.

Whitesburg will go to Jenkins Saturday night, Jan. 23, where they will engage the Jenkins Cavaliers. This will be the first game between these teams this year and is expected to be a close game.

Coach Sanford Adams attended a meeting of the Big Sandy Valley Conference, Sunday at Betsy Layne where drawings for the Conference Tournament took place. Whitesburg drew a bye and will meet the winners of Prestonsburg and Van Lear in the second round of the tournament. This tournament is to be held Thursday, Friday and Saturday of next week at Betsy Layne High School.

Sweaters were presented to the seniors of the WHS football team on Wednesday morning in a chapel program sponsored by the pep club. The presentation talk was given by Miss Carolyn Hays. Music was furnished by the school band. A talk about the boys was given by Coach Joda Adams. Those who received sweaters were Bryce Franklin, John D. Sergent (Captain), Junior Keith, Kethal Reynolds, and Paul Pigman. A sweater was also given to Lovell Williams for his service as “Doc” for the boys of the team.