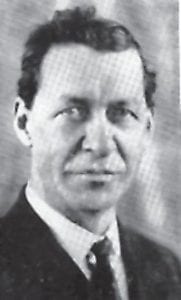 This morning, Thursday, February 29, 1940, Elijah B. Hale left his earthly work, and answered the call of God to higher labor.

He was born June 29, 1874, at Colson, Letcher County. He was married September 5, 1905, to Martha Sergent, who survives him. He is also survived by one son, Herman, cashier of the Bank of Whitesburg; one daughter, Mrs. Rosa Hale Jones, music teacher in the City Schools of Whitesburg; two brothers, Willie Hale of Hindman, and Benton Hale of Carossfield, Tennessee, and one sister, Mrs. W.E. Cook, of Whitesburg, and a host of relatives and friends.

He was a teacher for forty-five years in the Common and High Schools of Letcher County, except four years in which he served as County Superintendant. While acting in this capacity, he advanced and raised the standard of education. He selected the best teachers that he could get. He brought them together in Institutes and County Fairs.

Pictured above are some of the Whitesburg High School graduates who later became married to each other.

At one time, he brought about 75 to 100 boys and girls from all parts of the County, secured homes for them in the town and had a great day for the schools as the products of the County were disp layed and prizes were given for the best in handcraft, fruits, etc. He be- lieved in thorough preparation and qualification for teaching.

He was graduated from Whitesburg High School and held an A.B. degree from Eastern State Teachers College. He taught by precept and example, the highest ideals of character. He was fearless, honest and brave in the discharge of all his duties. He helped to prepare many boys and girls for their life work, and many remember the kind expression, encouragement and advice that fell from his lips while they were his pupils.

He was a man of great patience. In fact, as “Holy Writ” says, he added to his temperance, patience, which all good teachers must exercise. He was a leader in the cause of righteousness and morality. He believed in God and His Son, the Savior of the world. He was a Bible reader, Sunday School worker and church attendant.

He set an example of prudence, thrift and economy in business, yet he was ready to give to a good cause. He has left a stainless record and the result of his services in School will live long and bear fruit in Letcher County. “His works do follow him.” Funeral services will be held Friday at 2:00 o’clock at the Presbyterian Church. Burial will be at the Mouth of Sandlick Cemetery, Whitesburg, Ky.

(The above article from the February 29, 1940 edition of The Mountain Eagle.)

The following is from the December 1927 Black Kat, the student newspaper at Whitesburg High School.

Mr. Hale entertained the Senior class for about twenty five minutes after school on Thursday.

He told the honored ones that as soon as they got quiet they could journey to their respective homes. But the class was in high spirits and decided that they would have a little fun. The Boys’ Glee Club gave a (silent) selection called, “I’ll meet you at the station when the train comes along.” Then one of them conceived the idea that it would be a senior privilege to just get up and walk out. So the whole class started but was met at the door by the host, who ordered them all back for refreshments, which was ten minutes more added to their stay. The class finally quieted down and was dismissed. From then on a difference has been noticed; quieter and better seniors. Moral: Experience is the best teacher.

The following is from the May 1928 Black Kat

Faculty page: E.B. Hale is a native of Letcher County. He started school at the age of eleven on Rock House. He began his teaching career on Carr Creek and Knott County at nineteen. Mr. Hale organized the first graded school at Whitesburg and Letcher County in 1910. He graduated from Whitesburg High School in the Class of 1917. Mr. Hale was County Superintendent from 1918 until 1922. He was then a student at the University of Kentucky during the summer of 1923. He is a senior at Eastern Kentucky Teachers College. Mr. Hale has taught in the Whitesburg High School for the past three years.

For the hundreds who have been benefitted by his life and teaching, for those boys and girls who caught an insight into a rich and beautiful life, for those who knew him and felt the fineness of his character, for the countless host who will come after him to be benefitted by the influence of his convictions of truth, right and morality, and who will catch a gleam of the beauty and grandeur of one whose life was unselfishly spent to advance and raise the standards of education in Letcher County, we gratefully dedicate this, the third volume of the Clarion, to the memory of Prof. E.B. Hale.

Wednesday morning, November 13, 1928, Mr. Hale, our principal, addressed the Hi-Y boys at their regular meeting on the subject “Make the most of the present.” In his talk, he warned the boys that a great deal depended on their present ways as to what they would do in the afterlife. Mr. Hale closed his talk with a quotation which said, “Instead of waiting till the sweet bye and bye, let’s make the most of the golden now and now.” The address was certainly enjoyed by the boys, for most of them realized the truth of the statements.

The senior class of 1929 addressed Mr. Hale in the May edition of the Black Kat.

To Prof. E.B. Hale, we seniors wish to express our appreciation for the untiring and competent services given us. The school owes to him, in a great part, the standing it now has. He has said that most of the students are some relation to him and we can truthfully say that he treats them all alike. This is his fourth year of teaching in High School. He always makes us study hard but he does it for our own good. We hope that he will continue the good work as long as he remains with us.