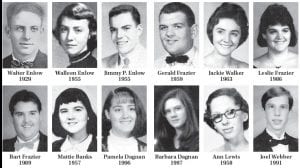 Pictured above are some parents and their children who attended Whitesburg High School.

Whitesburg Hi News- 1941-42: The Yellowjackets scored the first touchdown in the first quarter of the game. David Fields carried the ball for 55 yards.

The score at the half was 6-0 in favor of Whitesburg. Starting in at the half, Whitesburg scored in the first three minutes, making the score 12-0.

The Yellowjackets have improved considerably and will be in good condition to meet the Benham Tigers Saturday, September 20 at the Benham field.

Miss Margaret Hopper, who has made her home for the last 18 years in Korea, gave a talk Monday to the Whitesburg Hi. She told many interesting things of the people in Korea.

Local Girl Accepts Position in Ohio: Miss Elline Salyer, daughter of Mr. and Mrs. B. F. Salyer, left last Sunday for Martin’s Ferry, Ohio, where she has accepted a position as teacher in the City School.

Miss Salyer, who has taught in the local school for several years, is a graduate of Whitesburg High School and attended Kentucky Wesleyan College, at Winchester.

She is a member of the local Woman’s Club, the local Methodist Church, and was the originator of the Playmate Club, an organization of boys and girls, meeting weekly. Because of her community activity, she will be missed, but her many friends wish her well in her new field of work.

(The above article from the January 8, 1942 Mountain Eagle.)

Whitesburg and Letcher County are justly proud of the achievements of our local musicians. We have always contended that a band is one of the finest things any community can have. The Mountain Eagle is proud of the local band and is ready and willing to boost and encourage it in all of it in all of its undertakings.

Whitesburg High Graduates 85: Diplomas were awarded to 85 graduates at the Whitesburg High School commencement exercises held Friday evening at 8:00 o’clock in the auditorium.

In his speech Dr. Vaughan told of the trials and hardships of our first settlers. He told of how Dutch immigrants came to love and worship America and of one occasion when a Dutch immigrant fell down and kissed the soil of America. First, he asked his audience to go with him to Jamestown where the settlers fought both Indians and hardships and how they fought without aid or help from the Mother Country. Then to Hampton, Va. where the first free academy was established and finally to Whitesburg High School which stand as a symbol and a sacred shrine overlooking the valley. He told of how the rich and the poor, the banker, the lawyer, the doctor, those with influence and those without could all assemble together in peace and harmony. He gave many beautiful expressions of the high ideals of our country, using as example Abraham Lincoln and the unfinished task which lies before us.

After the address of Dr. Vaughan, Supt. Watson Webb presented the Diplomas to the Graduation Class. Then the benediction and “Forever March” by Orchestra, the audience standing while the class marched out. The class was very beautiful and it seemed that the dawn of young manhood and womanhood was just bursting into bloom. On the faces of some were expressions of sadness while mirth and laughter was the expression of others. No doubt each of these will do his bit toward advancing “Spiritual and Educational Liberty, High Ideals and Righteousness” in the mountains of Eastern Kentucky.

Gems of Thought From the Baccalaureate Sermon: An address which will be an inspiration for higher living in the minds of the eighty-five young boys and girls of the Whitesburg High School Graduation Class was the Baccalaureate delivered by Rev. W. H. Poore, of the Methodist Church on Sunday evening. He chose for his subject “Thou Hast Given Him Dominion”, and among the beautiful thoughts expressed were these: “You have the right to soar like Eagles, or to crawl like worms.” “He made you to have dominion, but he gave you the right to choose the heights or to dwell in the gutter.” “The tragedy of the insect world would for a caterpillar to die before it became a butterfly, the tragedy of the human world is for a man to fail to achieve the heights for which he was intended.” “Masters and captains are Kings, because they choose.” “Lying close to every majestic soul are enemies-prejudice, intolerance-fear-lustselfishness, materialism, worry, appetite for drink, which would become your master if they could, then you would become slaves instead of kings,” “As kings, you will find the hardest place to rule is right in your own hearts.” Mr. Poore addressed the class as “Your Majesties” and he said, “There are certain laws for your majesties to obey, laws of the universe, moral and physical.” In closing he said, “So, as Kings, and queens put on your royal purple, don the crown, mount the throne, take the scepter because as the Psalmist said, and humanity’s history bears it out. You were made to have dominion.”