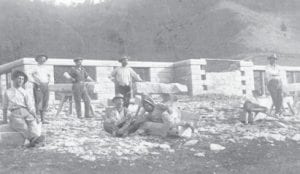 STONE MASONS — The foundation for the new high school in Whitesburg was laid prior to 1914. The United States needed skilled workers, so they sent notices out to other countries. Italy had a lot of men without work, so some of them decided to come to the U.S. and some of them settled in Whitesburg. They mined “blue stone” out of a quarry next to the school hill and cut and laid it by hand to form the foundation on which the school was built. The gentleman lying down in the center of the picture is Frank Majority Sr. and seated next to him is his brother, Vincent Mongiardo. Vincent Mongiardo kept the family’s original spelling and is the grandfather of Lt. Gov. Dr. Daniel Mongiardo of Hazard. Frank Majority Jr. of Whitesburg used his father’s shortened spelling of his name.

The first principal, Jerome Eastham, of the joint Whitesburg Graded School and Letcher County High School (Whitesburg High) was elected unanimously by the board of trustees on July 28, 1914. He was hired as high school teacher and paid a salary of $90 a month for eight months. He was the first head of the school to have an assistant, who was Nancy Jane Huff. The following course of study for the high school was adopted and ordered certified to the county superintendent and sent to the State Board of Education for approval.

Until this building was ready for occupancy, the high school classes were held in the basement of the First Baptist Church.

Paul Hounchell would be the first principal in the new building when it opened in 1918. This twostory brick building was constructed on the foundation on College Hill. The building was originally intended for high school classes alone, but the first classes were so small they could be held in the two upstairs rooms. The graded classes met in the four rooms on the first floor.

The top floor contained a large stage and a 700- seat auditorium. This large auditorium with the stage was the center of many events. This great room was where daily chapel meetings were held each morning. For a few minutes the entire student body would gather in the auditorium and join in song while Mrs. Harris played the piano. They had daily Bible readings and prayer, and Professor Harris or one of the other teachers would talk to the student body about patriotism or some subject just as timely.

Students in the school system were not provided meals until sometime around 1941-42, when the National Lunch Program was initiated. Until that time, the classroom to the right of the front steps of the high school on the ground level was used for science classes. With the beginning of the Federal Lunch Program, this classroom was converted into a school lunchroom. The first window from the steps was boarded over and the second one was removed and a door placed in that space.

Hundreds of students that passed through WHS fondly remembered the delicious home-cooked meals that were served there, especially the “large fluffy hot rolls” that the ladies became famous for. Of course, another memory of this lunchroom was having to stand in line outside waiting to get in, especially when it was raining or snowing. The reward was the good hot vegetable soup, ham and peanut butter sandwiches, or maybe soup beans, cornbread and slices of government cheese to top it off.

Fondly remembered deserts were the apple crisp pie and the rice pudding.

This room remained in service until around 1968, when the school board built the new cafeteria/library building. It was here that the same delicious meals were served along with a breakfast program as well until the school closed in 2005.

Soliloquy of the Old High

When you read this I will have been long gone.

What the storms of many winters of sleet, snow and wind, a tornado, a blast from work on the new bypass have failed to do, the wrecking crew with their high powered machinery will accomplish in a few short hours.

How well I remember the day in 1916 when the carpenters, stone masons, brick layers and others gathered up their tools and left me standing so majestically on the beautiful rolling hillside overlooking the little town of Whitesburg. Back of me, over the hill flowed the sparkling clear waters of the North Fork of the Kentucky River, above me a beautiful hillside covered with tall green trees. In front of me, just over the gently sloping hillsides stood the little town of Whitesburg. A small friendly town where most of the people had lived all their lives.

There I stood so proudly, the first high school building in Letcher County with my many windows shining, the bricks of the walls glistening in the sunlight, and all my beautiful stone steps so perfectly carved by master stone masons. I felt ready for the many students who would walk my halls, and graduate with honors from my rooms. In the many years to come there would go out from my walls many students who would become doctors, lawyers, teachers and many more who would make names for themselves in their professions.

There were many wonderful principals in the years to come, and in 1917 the principal was Paul Hounchell. In memory I can see him standing on one of the steps ringing the small hand bell to call the students in from dinner and recess.

In those days the Bible was used, and many times in Chapel there were Bible readings and prayer. Drugs were unheard of and sex was never mentioned in a school room. At different times we had many interesting speakers. Once when Professor Squires was the principal two of the speakers were “Chunk” Craft and Uncle Jim Collins, who had been in the Civil War. One in the Union and one in the Confederate Army. It was quiet interesting to hear some of their experiences.

Not many months after my demolition, while some of my bricks were still lying scattered on the school house grounds, a girl who had, years before, graduated within my walls lay upon her death bed. When ask by some friends what gift they could bring her, she replied, “Just bring me a brick from the old High School building,” and until her death the brick was a cherished possession.

For some class reunions some scattered bricks were scraped, cleaned and used for gifts.

Perhaps as long as bricks from my walls remain in the hands of those who have walked my halls and have loved me, I will still remain a happy beloved memory.