On Feb. 14-17, Joyce Sturgill and Sheryl Garrett participated in the Morehead Band Clinic. Mr. Lester took both girls to Morehead Thursday and they were required to audition in front of judges in order to be placed in one of the seven clinic bands. The bands had rehearsal during the day on Friday and Saturday in order to prepare for the concerts to be given on Sunday. Mr. Lester played in the Clinic Director’s Band Sunday along with the other bands.

There were around 600 students there representing approximately 70 different high schools.

While the girls were there, they were able to hear the Morehead Percussion Ensemble, the Morehead Jazz Band, and the Morehead Symphony. DECA students compete in contest 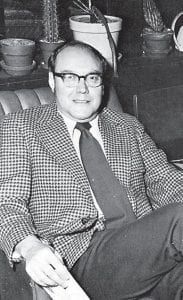 In Region 6 competition, 10 high schools were present to compete at Pikeville College. WHS students received two first place awards: Wendell Cook – Store Layout and Lucille Tackett – Show Card Lettering. A second-place prize was won by Diane Holbrook in the DECA Quiz. The WHS chapter of the D.E. Club won the second place prize for Chapter of the Year in Region 6. Those winners in the region will attend the State DECA Conference in March in Louisville.

We asked the senior basketball players how it felt to play their last scheduled game and what they thought about the upcoming district tournament. Eddie Stallard said, “It felt great to play my last game. I guess because I had a good night. I think we’ll win over Jenkins by 10 points in the district. I hope we’ll play Fleming next and beat them by at least 16 points.”

“I think we stand a fairly good chance of achieving success in the regional tournament,” says Bill Collins, “I am thankful for the privilege of playing with such a great group of teammates.”

Frank Hollan said, “We’ve had a mediocre season, starting off slow but ending with a good record. I’ve enjoyed playing four years here at WHS. I think Coach Eads has done a good job this year and our record shows it.”

WHS added a female statistician to the team this year, Cathy Frazier. When asked what she thought of the last game and the tournament Cathy said, “I feel sure that our boys have the ability to win the district and to go far in the regional. I wish them all good luck.”

Head Coach Lyle Eads summed up the season by saying, “It has been a very satisfying one, the boys are playing very well as a team and that’s why we have been fairly success- ful.” Coach Eads gave his predictions of the district by saying, “ I think it will be a very even tournament. I look for Jenkins to give us a very hard game.”

The Whitesburg Yellowjackets scored their biggest victory of the season, upsetting highly ranked Powell County, 14th region favorite. The lead changed hands throughout the game and the score was tied at the beginning of the last quarter. The Jackets took command with minutes left and went on to win 56-50. Frank Hollan had a big night with 16 rebounds and 17 points, Ernie Sexton also tallied 17. Mike Shepherd and Eddie Stallard scored 11 and 9 points respectively, Bill Collins added 2 points to wrap up the scoring.

The score was 67-64 in Whitesburg’s favor as the Yellowjackets wrapped up the final game of the season with a win over the Belfry Pirates. WHS led the first quarter scoring 16-10, but the score was deadlocked at the half 29 all. The score was close all during the game but some fast scoring by the Jackets proved to be their edge. For the Jackets Mike Shepherd lead the scoring with 21 points followed by Eddie Stallard with 17 points, Smoke with 13 and Bill Collins with 10.

Janet Bowen has been named WHS 1973-74 Betty Crocker Family Leader of tomorrow. Janet won the honor by competing with other seniors in the written knowledge and attitude examination in December. She is now eligible for state and national honors and will receive a specially designed award from General Mills, Inc., sponsor of the annual educational scholarship program.

Mr. Barry Bombay, instructor in the Retail Mid- Management program at Southeast Community College in Cumberland, was the guest speaker at the Distributive Education Club meeting on Feb. 12, 1974.

Mr. Bombay explained the different courses involved in the two-year program and opportunities available at the mid-management level in retailing and the business world.

The last part of the meeting was spent in answering questions from the students.

The Retail Mid-Management program leads to an associate degree and students may also transfer to another school for two additional years and complete a four–year program if they so desire.

A banquet held on Tuesday evening, March 19, at Morehead State University honored our principal, Mr. Burkich. He has been selected the outstanding administrator in the Eastern Kentucky region served by Morehead. The selection was made by superintendents of the Eastern Kentucky Area, and the award was presented by an honorary society of Morehead State University, Phi Delta Kappa.