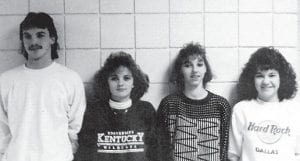 Mrs. Brenda Adams is one of the new counselors at Whitesburg this year. She attended Alice Lloyd College for two years and graduated from Morehead State University with a Bachelor’s Degree in Sociology and Health and a Master’s Degree in Recreation and Counseling.

She is the mother of Curtis and Monaka Venters. Mrs. Adams says, “there’s a lot more work here, but she likes counseling at Whitesburg.”

Mr. Chandler, who attended Morehead State University and majored in Health and Physical Education, will be teaching in the Alternative Education program. The program is an alternative to the regular classroom. Students who misbehave are sent to Mr. Chandler usually as a last chance. These students come from all Letcher County Schools and range from grades 7-12. They are confined for 15 days, but after a 15-day term they will be allowed to return to the regular classroom. Repeated offenses after the alternative program will result in expulsion.

Mrs. Gail Roark is the new art teacher here at Whitesburg this year. She is married to Warren Roark, and they live at Carcassonne. They have two children. Adam is seven and Tami is eleven.

Mrs. Roark attended the University of Kentucky for a while, leaving to raise her children. She later returned to Morehead State University to finish her education.

This is Mrs. Roark’s first year of teaching. She says that she has always loved art, and has always wanted to teach. She doesn’t expect all of her students to be great artists; she just wants them to do the best that they can.

Mr. Jones says that he likes Mr. Treece and that he is a very easy person to work with. He also says that he enjoys being the Vice- Principal of Whitesburg High School. When he was asked to describe how he felt about the student body he answered, “They’re a super bunch of kids.”

Miss Judy Mason is one of our new teachers this school year. She says that she enjoys teaching here. She feels that the student body is very easy to get along with. Miss Mason is a graduate of Milligan University in Tennessee.

Before coming to Whitesburg he taught at M.C. Napier. Here at Whitesburg High School he teaches math classes such as Math I and Algebra II. Mr. Adams says he really enjoys teaching here at W.H.S.

Mr. Darrell Treece is serving his first year at Whitesburg as our new Principal. He was formerly a principal of Henry County High School, New Castle, and Powell High School. Mr. Treece tells us that he really enjoys the friendly cooperation that he has received from the faculty and student body.

She has held several positions including Home Economics teacher, a Headstart teacher, a Guidance Counselor at the Letcher County Area Vocational Center and a Nutritionist at MCHC.

She is married and has two children. Mrs. Black says that she likes counseling here at W.H.S.

Another delightful new addition to Whitesburg’s teaching staff is English teacher, Mr. Terry Cornett. He was born in Hazard and attended Whitesburg High School. He attended three colleges including the University of Kentucky and Vanderbilt.

He has taught college at Alice Lloyd and Hazard Community College. He taught high school at Letcher and summer school at Whitesburg High School for five years. He says he likes Whitesburg and its school system. He says he is glad to return to teaching.

President: John Wilson is the son of Ken and Sue Wilson. He played football at Whitesburg Middle School and has been playing for the past two years for Whitesburg High School as a running back.

Vice-President: Vanessa Adams is the daughter of Donald and Louise Adams. She was chosen as the sophomore class representative. During her freshman year she played basketball for the Lady Jackets and was in the Outdoor Club.

Secretary: Nikki Boggs is the daughter of Leonard and Kaye Boggs. During her freshman year she was a BTeam cheerleader and was a member of the Outdoor Club.

Treasurer: Angie Hatton is the daughter of Billy and Sandra Hatton. Currently she is a cheerleader on the high school cheering squad. She is a member of the Math, Beta, and Outdoor Clubs. She is also considering joining the French Club.

(The above articles from the 1988 Black Kat Newspapers and the 1988 Yearbook.)