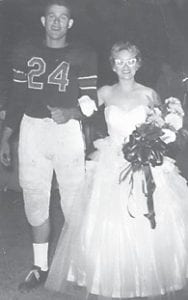 The homecoming parade will begin at one o’clock, October 28. All floats entering the parade will form in line on Railroad Street, just back of Madison Avenue. Floats must be ready and in line by 12 o’clock.

The parade will begin at the corner of Madison Avenue and Whitesburg Building, and proceed to Main Street and return to Madison Avenue.

For the night performance all floats will assemble outside the football field by six o’clock.

The homecoming dance will be held immediately after the Prestonsburg- Whitesburg game in the school gymnasium. Admission is 25 cents.

All of the floats were beautiful. The first place prize went to the V.F.W. and second place went to the Jaycees.

In observance of American Education Week, Nov. 10 has been set aside as “Visitation Day” in the Whitesburg school. On that day, a register of all visitors will be kept by the Home Ec Dept. and a program will be presented by the Speech Class.

The program, which deals with school problems of today, will be presented in the grade school auditorium at 2 p.m. Immediately following the program, the P.T.A. members will hold their regular meeting for the month of November.

Parents and school patrons are urged to observe the classes at work, meet the teachers, enjoy the refreshments, be entertained by the speech class and attend the business session of the P.T.A.

The seniors are still looking forward to getting their class rings. It looks as if they are going to be our Christmas presents.

Friday night, Nov. 4, we play our last football game this season. It will be played with Evarts and we feel it will be another victory for the Yellowjackets.

The Whitesburg High School Band, competing with seven other bands from southeast Kentucky and West Virginia, was presented a trophy after being judged the best marching band of the Big Sandy Bowl.

From the November 1955 Black Kat: Kitten of the Month is Ella Yonts. Ella is four feet, 11 inches so you see she is a very tiny petite girl. She is 16 years old and has brown eyes and long brown hair. She is a sophomore and her fellow is Major Sparks, and has been ever since the Kat remembers.

Her favorite food is chicken and favorite color is blue. She says someday she wants to be a secretary.

Kat of the Month is Charles P. Hall. Charles is five feet, four inches, weighs 125 pounds. He likes to hunt and trap. He is 15 years old and has brown eyes and blond hair. He is a sophomore and doesn’t have any special girl.

His favorite food is sweet potatoes and favorite color is blue. His ambition is undecided. A real handsome boy. By Eloise Reynolds.

Song dedications for November 1955: Mary Jo Day to Ely Craft – “I Wanna Play House with You.” Ardella Potter to Faron Young – “Live Fast, Love Hard, and Die Young.” Iva Lee McCray to Jose Chacon -“Wedding Bells.” Lona Lykins to Jim Jones -“O” Happy Day.” Joella Craft to Freddie Collier -“Ain’t Love Grand?” Nancy Lou McCloud to Bill White -“Hurry and Bring Your Sweet Self Back to Me.” Mr. K. Boggs to Whitesburg High -“This Ole’ House.” Helen Jean Olgelvie to Ben Webb –“My One Sin Is Loving You.” Juanita McCloud to Ovie Combs -“I Ain’t Gonna Wash My Face for a Month (Since You Kissed Me Last Night)”. Peggy Vic to Harold Olgelvie -“Love is a Many Splendored Thing.” Journalism Class to Mrs. Stephen Combs -“‘Cause You’re So Sweet.” Arnold Kiser to Patsy Kincer -“Most of All.” Robert Meade to Rebecca Pace – “Sincerely.”

What I think of
Whitesburg High girls

By a freshman boy

The Whitesburg High School girls are really indescribable, but I, Glenn Ihrig, will make an effort to express my opinion of these feminine creatures. First of all, they try to get the boys’ attention. In doing this the boys sort of make the girls their slaves. (Remember this is just my personal opinion.) Another thing, they have the idea of trying to flirt with Coach Trosper (who is really a lot older than they are). I’m sure that none of us boys try to flirt with Miss Adams. Next, they have that certain way of showing off. They will look at themselves in the mirror, “ugh!” Then they get out a tube of lipstick and plaster their lips with it. Then they comb and comb their hair in public. After going through this process they stand up and holler to one of their friends on the other side of the room so everyone will notice them.

Rex Polly. Rex was team captain of this year’s Yellowjacket squad. Rex was always good to move into the pivot position or any other where needed. The leading scorer and one of the highest on the squad in rebounds, Rex’s shoes in the forward position will be hard to fill during the coming year. Stitches during the latter part of the season prohibited Rex from being at full strength during tournament play.

Jimmie Blair. Jimmie has a more rapid desire to play basketball, than any other man on the squad probably has. Jimmie handled any pivot man which he came up against and use his 6’5” to the advantage of his team as far as the tip-offs, rebounds, and defensive play was concerned. We’ll miss you, Jim, and if you had not sprained and resprained those ankles, Carr Creek just might not be state champs now.

Billy K. ‘Red’ Banks. If I coach for another 50 years, I will never come up with a more fighting player on my ball club. He has more fight and can find more things to do with his 5’11” build than any other small man in this region. Although “Red” had off nights as far as points were concerned, he never missed a night that he wasn’t consistent as a rebounder, dribbler, and allround ball player.

Robert Meade. Robert stepped from a very successful season on the football field into a successful season as a basketball player. His drive from his guard position could never be stopped although sometimes he was penalized for charging. He gathered in the points on certain nights and was always in there to win whether he was having an off night or an on night.

Bassil Sexton. Although Bassil scared us a few times during the season from injuries, he was always available for a set shot at the right time. Anytime that Bassil could get a shot away from behind the foul-circle or drive into the circle, I could depend on two more points. Bassil proved his fighting heart during the Breathitt County game, as he came back to start against Cumberland the next night despite a slight concussion.

Jim Jones. Big Jones came up to take over the position of starting pivot man when we needed him during tournament to play in the absence of Jimmie Blair. Although Jones had the strength of a lion and the strong body, height was his sole disadvantage. It was great having you on the squad, Jim. You are a real asset.

(The above article from the March 1956 Black Kat)

Attention all redblooded young American boys. You too can belong to the “Turtle Club!” Up until this time, its membership has been limited and exclusive, but we are now considering allowing a limited number of new applicants to join.

Anyone wishing to join must be recommended by two active “Turtles”. He then must take a very strict entrance examination which will be supervised by the Big Four. They are Muggs Day, Joe Cook, Johnny Doyle and Ralph Palumbo, who are the four senior members and at the present time are vice presidents of the club.

We are sorry that we cannot publish the rules and regulations of the club, but due to the Security Code of the club, only members are allowed to know the club secrets.

This is a fine organization, closely affiliated with the Wild Life and Bachelor Club and the United Mine Workers. If you wish to apply for membership to this club, contact one of the Big Four, or send in this handy blank to the Black Kat.