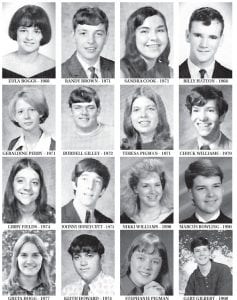 Whitesburg High School Band has been organized one year and has been very progressive for that year under the direction of Hugh Adams. A meeting held Monday night of the band parents passed by unanimous vote to purchase uniforms. The uniforms that they are planning on purchasing will soon be on display for public approval. We are asking full cooperation from the public in this undertaking. We want to keep this high school band going. Experience has shown that the band is a builder of character, training in good health and a preparation for earning a livelihood. What other training or activity offers such a useful training for developing a boy or girl as band and orchestra training in the high school?

A band promotes the interests of the school and community. Money spent in preparing these young people comes back to the community quickly and increases many fold. A band is a splendid builder of democratic group spirit. Here is a common interest which brings all classes together on an equal basis. There is no better advertising for a community than a well-established permanent band. So let us get behind this band and have it ready for our parades. Let’s dress them up so we will not be ashamed of them when they compete with other bands in uniform.

(The above article appeared in The Mountain Eagle November 9, 1939.)

It is written in the Good Book to “ask and you shall receive,” which is exactly what our Letcher County Band leader, Mr. Hugh Adams, and Miss Elline Sayler did. When it developed that insufficient funds were available locally to take our fine band to Lexington, to compete for State honors. Miss Salyer at Mr. Adams’s suggestion, wrote Mr. J.D. Hill, President of the L&N, asking that the railroad lend a helping hand. Mr. Hill promptly replied that it was not the policy of the railroad to do this kind of thing, but in as much as the miners were not working and business conditions were such that it would be hard for the band to get local sponsorship, that a special car would be attached to the regular passenger train which will leave Whitesburg Thursday morning, May 8, for Lexington, and will be there to bring them back Saturday night. They will arrive in Whitesburg the following Sunday morning.

The Letcher County Band became eligible to participate in the State Tournament when they competed in the regional tournament at Pikeville and won a rating of “Superior.” The band of course, will be accompanied by Mr. Hugh Adams, bandleader, and chaperoned by Misses Elline Salyer and Martha Jane Potter and Mrs. Jack Caudill.

“And here let us say three cheers for the old reliable and our Letcher County Band.” So strike up the band, musicians, and may the honors be all yours!

(The above article appeared in The Mountain Eagle May of 1941.)