The students of WHS have completed the election of class officers for the 1968-69 school year. Jeanie Price was chosen to serve as president of the senior class; Karen Kincer, vicepresident; Emma Day secretary; and Glenda Younce, treasurer.

Nika Stallard, daughter of Mr. and Mrs. W.L. Stallard, Jr., has recently been announced the district winner of the essay contest entitled, “What Every Employer Should Know About the Handicapped Worker.” Nika will receive a certificate and a $25 Savings Bond for this achievement. Her essay will be entered in state competition.

The annual Betty Crocker Award was won by Jane Ellen Cox, a senior at W.H.S. and daughter of Mr. and Mrs. Jack Cox. Jane was one of many girls who participated in the Whitesburg High Betty Crocker test which consisted of questions covering all areas of home economics. 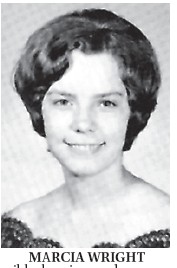 Iris presented her speech, Freedom’s Challenge, to be judged with speeches from Jenkins, Letcher, and Neon High School students. Iris is the daughter of Dr. and Mrs. B. F. Wright of Seco.

Bobby’s charisma remembered by many at WHS

On this 1969 Valentine’s Day we recall another day, one year ago, let’s think back to that February 14 … Our small town was honored with a brief visit from Sen. Robert F. Kennedy, a famous New Yorker and brother of our late president, John F. Kennedy.

He took the time from a very busy schedule to make this unscheduled stop. Sen. Kennedy spoke as if he had known us all his life, or as he would speak to a neighbor. He made every attempt to show us that he was our friend and really wanted to be our president.

As he left that day, many saddened citizens were left behind. The visit had been very brief and we wanted to know him better. Unfortunately, we’ll never have this pleasure. Those few moments, on Valentine’s Day, are all we will ever have.

In early June, 1968, after making a victory speech in Los Angeles, California, Sen. Kennedy looked about for his wife, Ethel, in the crowded hotel. At that moment, an assassin’s bullet sent Robert F. Kennedy to his grave.

On Valentine’s Day of ’69 as I glance at the courthouse steps where he spoke to the wild, cheering, and screaming crowd, I can almost see and hear him speak again. It was a rare moment of history which we shared and should always remember.

The Whitesburg High School Graduation will be held Friday night, May 30, at 8 p.m. in the W.H.S. Gym. The guest speaker this year will be Roger L. Wilson, Vice-President for Student Affairs, from Morehead State University. Linda Kaye Ison, daughter of Mr. and Mrs. Hiram Ison of Whitesburg, will present the Valedictorian speech and Danny Mohn, son of Mr. and Mrs. Frank Corrello, will then present the Salutatorian speech.

May 13, 1969, the English Department of W.H.S. sponsored a bus trip to Pikeville to see the movie “Romeo and Juliet.” The trip was primarily for 9thgrade students who were involved in the study of this particular Shakespearian play. Sponsors who made the trip were Mrs. Joy W. Breeding and Mrs. Anne Banks. The group had a good trip and enjoyed the Academy Award-winning movie.

Note: I would appreciate getting any copies of the Black Kat Newspapers to use in this column. My email address is bennett. welch@gmail.com. If anyone has any of these please contact me at the address.