Summer is over and Whitesburg High is back into the swing of things. The students look back on their fond memories of summer and recollect a few things that they did. Jeff Maggard chewed ‘baccer and went to Neon. Betsy Adams went to Field Commander Camp. Serena Mullins didn’t do anything. Eddie Stamper worked, went swimming, and hunted. Sandy Fields went camping and saw Mother Theresa. Tony Evans went to Indiana, Georgia, and rode my motorcycle. Carl Mullins, very little. Danny Gilbert worked at dad’s office and partied. 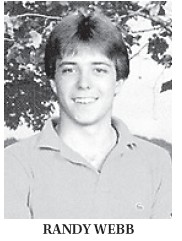 Members of the DECA Club participated in the Region 6 Career Development Conference at Hazard Community College in April.

I, Kim Kincer, will my ability to tell a joke and make everybody laugh even though it’s not funny to Dewey Dollarhide in hopes that he will be as successful as I was. I, Ruby Cress, will my ability to watch all of the great looking guys to Marlene Lewis. I, Mark Cornett, will all of my brownie points with Coach Roe and Mrs. Garrett to Randall Ferguson. I, Jaranda Spangler, will my cousin, Stephen Craft, to Michelle Slone and my abilities in Mr. Sexton’s 5th period class to Janetta Sexton. I, Barbara Boyd, will my seat in Mr. Frazier’s room to Melody Boyd. I, Terry Cornett, will my super human strength to Joe Senters. I, Pamela Sue Adams, leave my ability to take 6 straight classes to Tim Pennington. I, Mark Powell, being of sound mind and body, hereby leave my ability to wreck the orange and black van to Jamie Creech. I, Trisha Baker, will my last remaining bottle of “Amazing Quick-Grow Capsules” to Jenny Huff. I, Kenneth Collins, will my back seat on bus 32 to Billy Collier. I, William Sizemore, will my acting skills to Larry Cook. I, James Owens, will my old worn out sneakers to Becky Gilliam. May she wear them with pride. I, Eric Gilliam, sometimes being of sound mind and body, will my ability to stay in trouble and never know what for to Jerome Banks. I, Darrel Sturgill, will my history seat to Paul Miles. I, Tony Sizemore, will my ability to go home early to Libby Haskins. I, Elaine Wicker, leave my wild and crazy ways to Angie Phipps, Rhonda (Pearl) Lucas, and Gina Holbrook. I, Tena E. DuBois, will my history desk to Sharon K. Maggard. I, Tommy Brashears, will my ability to have problems with women and trucks to Bert Adams. I, Mary Ann Halcomb, will my drafting desk to Stanley Cornett in hopes that he learns as much as I have in Mr. Harlow’s class. I, Sharon Campbell, will my old locker to Beth Lucas. I, Arlene Ross, will my ability to drive to Balisa Baker. I, Tony Lee Evans, will my ability to be President of the VICA Club to Mike Morgan. I, Vickie Collins, will my gracefulness to Jenny Huff. I, Gloria Terracciano, will my credits in English to my sister, Alicia. I, Debbie Kincer, will my perfect attendance record and my place in the top 10 percent to my brother Scottie Kincer. I, Chris Gibson, will my driving ability to anyone dumb enough to take it. I, Chris Holbrook, being of sound mind and body, will my understanding of Pre-Calculus to Steve Boggs. I, Janey Callahan, will my senior year at WHS to my brother with lots of luck.