On February 2 and 3, the Whitesburg Speech Class, under the direction of Mrs. W. B. Hall, presented to the grade school and the high school two one-act plays and two humorous monologues.

“Love Hits Wilbur,” a comedy, was well produced by Gene Collier, Shirley Stallard, Clara Lou Webb, Ada Louise Fields, Roberta Jenkins, and Sewell Barrett. The plot was based around Wilbur, a 13-year-old boy who hated girls, but soon learned to like one in particular, Clara Lou Webb. 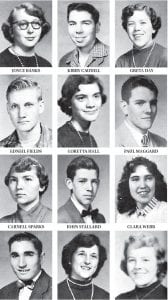 The two monologues were done by Cecil Barnes and Wilsie Mae Mason.

Thursday, Feb. 10, at 1 p. m. and Friday, Feb. 11, at 9:30 a.m., the Speech Class will present two other one-act plays and three monologues. The plays to be produced are “No Greater Love” and “Tell It to The Morans.” This promises to be a good program.

From the four one-act plays done by the Speech Class this month, one will be entered in the Regional Drama Festival at Pikeville on Feb. 26.

Mr. Jack Taylor presented his wonderful Concert Band in a Christmas program to the students and some parents on Tuesday morning. They looked pretty enough to grace the front of a Christmas card in those handsome uniforms. 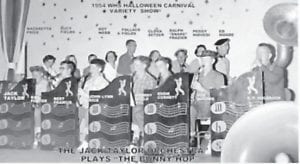 The 1955 Whitesburg High School Concert Band performed in a Christmas program for students and some parents.

The Whitesburg High School Band, competing with seven other bands from southeast Kentucky and West Virginia, was presented a trophy after being judged the Best Marching Band at the Big Sandy Bowl.

The Whitesburg Yellowjackets lost their second game to Hindman 52-60. Keep the good work, boys, you know we can’t win all the games but we can give them a good race!

Mr. Boyd has an excellent B-team and they have won every game they have played this year. Stuart Robinson 26-Whitesburg 33; Jenkins 34-Whitesburg-37. These boys will be our future A-team.

Ronald Collier and James D. Polly are two cute boys on the loose, come on, girls, let’s get busy.

Charles Adams and Joan Morgan have been together

Paul Maggard is getting a lot of attention, isn’t that so, Chelsia Hall?

Carol Brown, looks like you are starting another romance with Harold Cook.

Seems that Nancy King and Jimmy Enlow don’t have any trouble — or do they, Betty Francis? Kelly Boggs, whose are those notes from that you’ve been getting? Could it be little Dallas Fields? Things seem to be going just fine between Nina Day and Donald Stamper for a change. Ardath Polly, who’ve you got a crush on, a sophomore? Watch out, the Kat’s watching you. Janice Bentley, we hear you’ve got a crush on Phil Adams. Could this be right?

Dear Santa: I have been a good teacher this year — please bring my wife, Ruby, a baby doll and bring my poor little Biology students a new teacher, so I can hibernate. Mr. Caudill.

Dear Santa: Please send me a walking doll with blond hair and a figure all boys whistle at. Gary Long.

Dear Santa: Please bring me a big blond guy, who is number Thirty-Seven on the football team. Also, a red convertible so I can drive my he-man around and keep him away from other girls. Genevive Hogg.

Dear Santa: Please bring me a cute little freshman girl — I don’t know if she is any relation to you or not, but her name is Santa Carol. D.C.