The Black Kat Staff asked several students how they spent their summer. Some of the results are as follows:

Mike Mullins, a freshman, stayed at the house most of the time. Went fishing a couple of times, worked a little while, and went hunting.

Ronnie Adams, a senior, spent his summer at the Tennessee lakes and ran around.

Mr. Chandler: “I worked, vacationed, and fished at Lake Cherokee.”

Regina Morris, a senior, said: “I went to England!”

Tammy Boggs, a freshman, worked in the garden, went swimming, and learned how to drive.

Kim Arthur, a senior, said: “I stayed at home and cried when my neighbors moved.” 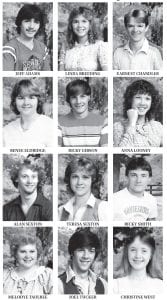 Denise Hylton: “I laughed while Kim cried because her neighbors became my neighbors!”

Mike Wright, a junior, stayed at home and practiced football.

Janie Clevinger, a freshman, worked in the garden, went swimming, and babysat.

David Pike, a freshman, played in the band, went swimming, played baseball, went to Kings Island, and went to the beach.

Mr. Henrikson: “Aaah went to Morehead and Minneapolis for a week. Mainly went to meetings and to see my mommy.”

Joey Roberts, a sophomore, stayed around the house and went camping.

A History-Part II: We chose for our class colors blue and white, for our class flower the rose, and for our motto, “Things Don’t Change, We Change.”

During spring break of our junior year, the band building was gutted by fire. This made a drastic change for the band and chorus students and Mr. Lester. They were forced to take the building that had been used for study hall. The study hall had to be moved to the balcony of the gym.

The girls’ basketball team were district champions for the first time and won the Jenkins Invitational Tournament. They ended their season with a record of 29 wins and six losses.

We began our senior year in the middle of a hot August. There were about 170 of us. Our class officers were Randy Blair (president), Mark Cornett (vicepresident), Greg Hall (secretary), and Stephen Burke (treasurer).

Morgan Blair and Amy Wright were king and queen of the ring dance, which was held on Monday, Nov. 2.

Our girls’ basketball team finished the season with a 31-4 record, their best of the whole time our class had been in high school. They won tournaments at Betsy Layne, Jenkins, and Cawood, and also won the district tournament. They hold the school record of 140 points in a basketball game. They also hold the record for the most points in regional tournament play (105 points against Wolfe County). Terri Adams, Billie Jo Hatton, and Judy Mason were named to the All-District team.

The boys’ basketball team worked for most of the season with a new coach, Goebel Ritter. They were district champions and did very well in regional tournament play. Randy Frazier was given an All-State honorable mention from the Courier-Journal, and was also named to the All-District and All-Region teams.

The boys’ track team has finished up the past four years admirably. They were EKMC runners-up in 1980, EKMC champions in 1981 and 1982. They were also regional runners-up one year. The senior boys on the track team were Tony Day, Stephen Burke, David Brown, David Holbrook, Ernest Chandler and Greg Polly.