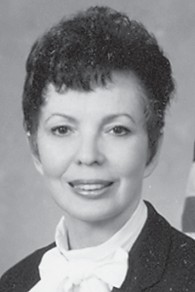 Dr. Proffitt is the daughter of Mr. and Mrs. Stanley Proffitt of Whitesburg. She graduated from Whitesburg High School in 1954 and from Centre College in 1957.

Dr. Proffitt lives in Huntsville, Ala., where she has spent her professional life. For more than 30 years, she has helped develop the nation’s strategic missile defense program.

“Technology is my love,” she said, and her work has put her on the leading edge of defense technology. She is the Army program executive officer for Air and Missile Defense in Huntsville, where she manages the Patriot missile project.

After receiving a bachelor’s degree in chemistry and physics at Centre College, Dr. Proffitt earned advanced degrees at the University of Alabama- Huntsville and Southeastern Institute of Technology.

Dr. Proffitt was a member of Wernher von Braun’s space team and held key positions with NASA’s Marshall Space Flight Center and the Army. In 1990, she became the first woman named to the Senior Executive Service at the U. S. Army Strategic Defense Command, one of the Army’s highest civilian posts.

She also worked for five years with anti-ballistic missiles as program manager for the Army’s National Missile Defense Program. “We came up with the technology, built the interceptors and radars, did the field testing, and proved it,” she said. “This put us in a position to defend the United States.”

Dr. Profitt attributes her success to hard work and education. “The professors at Centre opened doors for me,” she said. “I’m from a coal mining family in Eastern Kentucky.”

Dr. Proffitt was also the recipient of the National Space Club’s von Braun Astronautics Engineer of the year Award in 1999.

High school band to give
annual concert at the
Alene Theater

If you like good music or if you are a movie fan, you have a treat in store for you on Thursday, April 1, when the Whitesburg High School Band, under the direction of Jack Taylor, will present their spring concert at the Alene Theater. This concert will be in addition to the regular feature length movie, “Drums of Tahiti”, starring Dennis O’Keefe and Patricia Medina. Admission for this combined entertainment will be 20 cents and 35 cents for students and 60 cents for adults for the matinee; and 20 cents for children and 60 cents for adults for the evening performance. The concert will precede the movie both afternoon and evening and will also feature the 15-piece High School Orchestra in several numbers.

Proceeds from this entertainment will be used for new uniforms for the band. We feel that Whitesburg is indeed fortunate to have such an active and alert band and director as we have so let’s show our appreciation of their fine work by giving them the boost they deserve. Tickets are now on sale by band members so buy yours early and enjoy an evening of fine entertainment.

(The above article appeared in The Mountain
Eagle
March 25, 1954)

The Whitesburg Yellowjackets combined good teamwork and sharp passing to close out the season in a blaze of glory by defeating the Hindman Yellowjackets in the final game of the season by a score of 71-62, thus avenging an earlier loss to the same team.

The first half was a nipand tuck affair with the quarter score being tied at 15 all and the half-time score standing at 35 even. The second half saw the local team holding a lead throughout, although it wasn’t a comfortable lead, it was enough to notch its 17th win against six losses.

The Whitesburg scoring was evenly divided as all five starters hit the double digits which indicates good team work. Crase hit for 19, Kincer for 16, Holbrook for 15, Fields for 11, and Logan for 10. Top man for Hindman was Newsome with 19.

By decisively defeating Hindman and Carr Creek, the Jackets have sounded a firm warning to other 14th Region teams. If the local team will continue to show the teamwork, passing ability, rebounding strength and just plain old scrap that it has shown in the past few games, the Jackets could carry off both district and regional honors. Anyway, we’re with you, boys, win, or lose or draw so give them all you’ve got and remember it is better to be a good winner than a good loser.

(The above article appeared in The Mountain
Eagle
March 4, 1954)

At five o’clock Monday morning, April 12, 90 of the members of the senior class took their leave for the annual trip to Washington, D.C. Accompanying them as sponsors were Prof. Kendall Boggs, Mr. James D. Boyd, Miss Vera Raleigh and Mrs. Edith Polly.

To save time, packed lunches were taken along and the only stop of any length was at the scenic Natural Bridge, Va. At about 10 o’clock Monday night they arrived at Hotel Cairo, Washington, D.C. Since their stay in the capital was limited, little time was allotted to sleep. Three guides were employed and at 6:15 the next morning they were on the three buses and ready for sightseeing. The seniors state that it would be impossible to list all the interesting places and things they saw but the following seemed to be more outstanding in their memory. First, they tell of going to the Engraving and Printing Bureau where they saw money being made in denominations all the way from one dollar bills to 100,000 dollar bills. Later in the day, they visited the Lincoln Memorial and went to the top of the Washington Monument from which they could view almost the entire city. Outstanding in their memory was the impressive change of guards at the Tomb of the Unknown Soldier. They were taken through the White House, the Capitol, F.B.I. Building, Arlington Cemetery, George Washington’s home at Mount Vernon and many other places of historic interest.

Probably heading the list of the greatest attractions was the Smithsonian Institute, with its annex, the Museum of Natural History. There was so much to see and so little time to see it that sponsors and guides had to do quite a bit of urging to get their charges on to the next place listed on their itinerary.

Although sightseeing of historic places was limited to daytime, the evenings were not wasted. One evening the entire group visited Glen Echo Park where many seniors experienced their first thrill on the roller coaster. Some who had been reluctant to part with their spending money became quite liberal here. Another evening, the entire group went on an excursion boat down the Potomac River.

All made the trip safely but on the return trip, there was a slight accident through no fault of the driver of the bus. Happily, no one was injured, but the group was inconvenienced by a six-hour delay.

About four o’clock Thursday morning the tired, sleepy, hungry seniors loaded with souvenirs, including hats and squirt guns, some of which are still in hock, were turned over to their waiting parents at the Whitesburg Bus Station.

This is the eighth Whitesburg High School graduating class to have the privilege of making this interesting, highly educational trip and the representatives of this school are to be commended for financing such a venture. Not only is it educational for the students, but for many it serves as an incentive to continue their education.

This annual excursion is limited to the nation’s capitol so that it will not impose a hardship on the community. It is thought that so long as this venture is not allowed to go to excess that neither school activities nor local civic projects will suffer in order to make this privilege possible for seniors.

(This article appeared in The Mountain Eagle
April 22, 1954)

Baccalaureate service for Whitesburg senior class will be conducted Sunday evening at 7:30 p.m. in the gymnasium.

The Rev. E. Hampton Barnett, pastor of the Whitesburg Methodist Church, will deliver the address. Gloria Holstein and Mr. Hugh Adams will play the processional and recessional and the WHS mixed chorus will provide special music, directed by Mrs. Bill Owens.

Commencement exercises will be held Friday, May 21, at 7:30 p.m. in the gymnasium.

Dr. H. B. Smith, dean of Union College, will deliver the commencement address. Mrs. Albert Jones and Mr. Hugh Adams will play the processional and recessional. Supt. Dave L. Craft will present the diplomas. Music will be furnished by the mixed chorus, directed by Mrs. Owens.

James Crase and Guinevere Crase, son and daughter of Mr. and Mrs. Ted Crase of Roxana, will deliver the valedictory and salutatory address.

A tribute to the senior
class of 1954 by Kendall
Boggs, principal.

I am expecting great things of you as you go out into life.

You have the capabilities, the possibilities and the latent potentialities to accomplish great things. Among this class of 107 I can see those who have the abilities to become outstanding men and women in the field of science, in the fine arts and professions. I see teachers and educators , politicians, salesmen and real estate dealers. I foresee among the girls those who may become nurses, pediatricians, airline hostesses, and above all housekeepers and mothers who will mold the character of the next generation.

Congratulations, class! You have been well-behaved ladies and gentlemen! It was a joy to accompany you on your Washington trip. Proudly I claimed you as mine , when I heard complimentary remarks on your behavior.

I shall be watching your future lives with interest and even though you may not achieve fame or fortune or even though you fail to achieve success, I trust that you will remember the lines of Shakespeare: “To thine own self be true and it must follow as the night the day, thou earnst not then be false to any man.”

Six hundred and seventy eight essays on “How soil conservation benefits my community,” were written by Whitesburg High School students.

School officials believe that each student should have knowledge of the benefits of soil conservation farming and the hazards of soil erosion. Because of this an essay was required of each student in high school. The essays are of exceptional quality, especially since the students have had only a short time to prepare them.