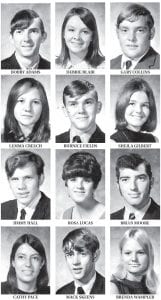 The fifth annual Regional Mathematics Contest was held Friday, April 24, at Cumberland College in Williamsburg. Approximately 20 high schools from southeastern Kentucky and northeastern Tennessee sent students to the contest. Two-hour examinations were given in Algebra I, Geometry, Algebra II, and Advanced Math. Plaques were awarded by the college to the first- and second-place students in each event. Each school may send two students to take each test. A plaque is also awarded to the school which gets the most points. 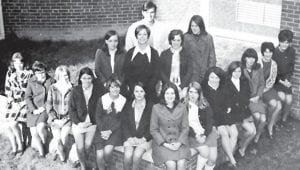 Pictured are members of the 1970 WHS Future Business Leaders of America Club.

Teresa Baker won the Algebra I division last year. With her win this year she became the first WHS student to win two consecutive years. Herby Smith and Marty Newell have taken part in the contest all four years that WHS has sent a team. Smith has placed third, second fourth and third. Newell has placed fourth, first and fourth.

The worth of the senior trip by Diana Caudill

The senior trip this year was certainly worth the money that was spent on it. Besides being fun it was educational. Many kids who would never have had a chance to see either Washington or New York went, saw, and learned. More could be learned in an hour at the Smithsonian Institute in Washington than in a day at WHS. This was because the students were experiencing these places instead of reading about them, and because of this they would remember them.

Places such as Greenwich Village, Skid Row and Chinatown came to life before our very eyes. The view from the Empire State Building was one that we would have only once in a lifetime. Going to the Statue of Liberty was another experience that many of us will never have again. 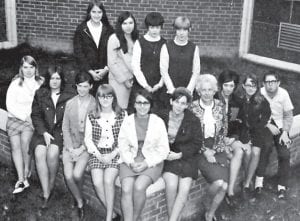 The 1970 Bible Club was composed of students at Whitesburg High School.

Besides this we saw the Capitol, the Wax Museum, Mount Vernon, Times Square and scores of other places.

Perhaps one of the more vivid memories we all have though, is of riding in the buses. Everyone had fun singing, having ice fights and pillow fights and generally acting uncivilized.

I believe more field trips should be planned. Indeed, more American History and Sociology could be learned on trips like these than in hours in a classroom. The experience of being in a slum, seeing the misery and pain, and being a part of it, would teach us more than hours of explain it.

American History and Literature would actually “come alive” in such field study activity. Being at places such as Mount Vernon brings that whole phase of America’s past into vivid perspective. 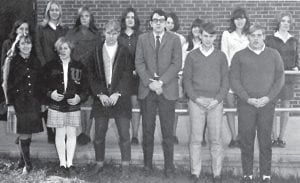 The Whitesburg High School Speech Club posed for a photograph in 1970.

Indeed trips such as these should be made available to more students. This could be done by various clubs on the school hill organizing, working, and actually going on these tours. Experience is the greatest teacher.

I am very much in favor of the senior trip being continued. As it is, only 51% of next year’s seniors have signed up for the trip, and perhaps, more will drop out. I am trying to boost the juniors when I say that the senior trip is well worth the money that goes into it.