Take last year’s Yellow Jacket football team, graduate 10 regulars, and add a bunch of inexperienced sophomores and juniors to five returning lettermen and you have the problem which faces Coach Ray Pigman of Whitesburg High School.

“I have no reason to be optimistic about this year’s team,” Coach Pigman said yesterday. “It’s hard to tell what they will do until they go under fire.”

Explaining, Coach Pigman said that he had but five experienced boys back from last year’s undefeated eleven, which captured the conference crown with a brilliant record of seven games won, and two tied.

Of the 10 regulars lost, nine were starters, and at one position, the center slot, two boys took diplomaleave of the school.

The five lettermen who will bear the burden of the Orange and Black are James Gose and Ronnie Kincer in the backfield, and Bobby Maggard, Steve Harris and Ralph Palumbo in the line. 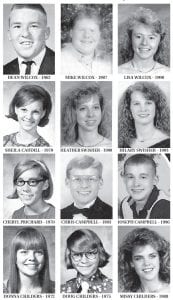 “All of these boys may be in for a season of 60 minute performances.

Of the 42 boys who reported for practice five weeks ago, 30 are expected to get the nod to draw traveling tickets and uniforms for the first game of the season with Prestonsburg Friday.

Coach Pigman said that he still was not sure of just which candidates would draw down starting berths.

The current picture shows a starting backfield which will be picked from five boys. James Gose, Ronnie Kincer, James Tolliver, J. Fairchild, and D. Polly have all shown up well in practice sessions, and four of them are likely to be in the line-up at kick-off time.

The aerial attack will depend heavily on the arms of Tolliver and Kincer. Gose may fling the oval when the team switches from the T-formation to the Notre Dame box.

In the line, the story isn’t rosier. Except for Harris, Palumbo and Maggard, the boys who draw starting assignments against Prestonsburg will be doing this for the first time, Coach Pigman said.

As the situation stands now, here are the boys by position who seem likely for starting berths or considerable action against Prestonsburg.

A Captain and Co-Captain for the 1950 WHS football team have been elected by members of the squad, it was announced by Head Coach Ray Pigman.

Serving as Captain will be James Gose, a threeletter winner in football at WHS. The Co-Captain will be Steve Harris, regular guard on last year’s team.

Here is a list of the accomplishments of this team at the end of the season: Leading scorer for the Yellow Jackets was Ronnie Kincer, with a total of 75 points.

Only one team held the Jackets scoreless — Fleming. Belfry was the only team not to score against Whitesburg while three Yellow Jackets opponents — Pikeville, Cumberland and Hazard — at their best were good for only one tally. All of Whitesburg’s opponents — excepting Pikeville with 20 points — were held to 14 points or less. Whitesburg, however, went above the 14-point mark in five games. The team had a 7-3 record for the season.

Season scores for the Yellow Jackets were: Ronnie Kincer 12 TD’s; James Gose with 6; Jimmy Tolliver had 3; Doug Polly with 2; Ralph Palumbo and John Hall had 1 each.