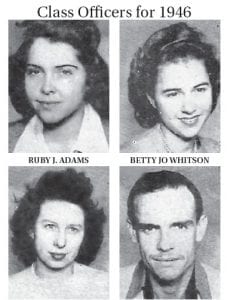 Class Prophecy for the class of 1946

Last week while returning from the moon on a rocket, I was enjoying the quiet solitude of the lounge compartment, when suddenly I noticed a very distinguished looking gentleman across the aisle. After studying his features, I recognized him. It was none other than Owen Adams. He had become a very prominent doctor in New York City and was returning from the moon where he had gone to get some exclusive chemicals. We finished our trip to earth talking of our high school days and of our many classmates. On landing on the ground, we saw standing in the airport, a rather slender, dark-haired woman with three small blond-headed boys with blue eyes, we knew at once that it must be Ann Hays. She was waiting for her husband, Fernoy, who was now owner of Mosgrove’s commissary. Neither Ann nor Fernoy had changed very much, except there were a few traces of grey in Fernoy’s hair. After becoming accustomed with the changes in each other, we planned to look up as many of our former classmates as possible. 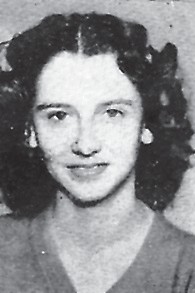 We walked into the Greyhound Bus Station, which had been built into an airport. Since the Atomic age, almost everything had been changed into air transportation. On entering, we went over to have a Coke when we noticed a very wealthy looking lady of about 35. She was none other than Kathryn Back. It seemed she had married a bus driver and now owned the whole company. We went on over to the counter and found that Ethel Standifer was the waitress, still unmarried after all her tries. We sat for about an hour talking over old times and glancing around the room, we noticed Earl Reed propped up in a lounge chair chewing a toothpick and reading a funny book while six small children played around his chair. It seemed he had married some girl from his hometown and had done well for himself.

Well, so far so good. We had gone only so far and found several classmates. We again started out. On leaving the station we met “going home to mother” Betty Jo Little now Mrs. Sonny Boyd, and with her were three small boys with very short hair and dark eyes. She was overjoyed upon seeing us and decided to go back to help us in our search. She knew where we could find Ralph Whitson, now manager of the Miners Dept. Store, and still a bachelor. Yet there seemed to be many eligible women around.

We continued our search and found that Billy Paul Frazier and Ruby June had, after all their quarrels, settled down to a happily married life to raise their family of six boys.

We then decided to go to the police station to see if any of our boys had been bad since we had last seen them. We checked over all the records and came upon the names of J.B. Hall and Rex Edminston arrested for reckless driving. Here they were two fine men locked up, away from their charming wives. We all chipped in and paid their fines and added them to our list of “Found Members.”

We then headed for Blackey to look for Charles Hall. We found him lying in a long lounge chair by the swimming pool smoking a cigar. It seemed he had become very wealthy for his age and was taking life easy. Looking over his beautiful home we found that he had quite a flock of servants. They were none

VALMA COLLINS other than Joy Fae Webb, Lavon Sparks, and Jo Nell Board (of all people). The butler was Charles Ed Blair and very efficient. His valet was Coleman Day, gardener James Craft. It seemed that Charles had kept up with his part of the class. Here we decided to have a party. We sent invitations to every known address and here we completed our search.

Everyone was dressed for the gala occasion with most expensive furs and jewelry.

The doorbell rang and in walked Virginia and Thelma Sergent, Jeanette Wampler, Lela June Johnson, Rachel Combs and Imogene Collins, all old maids. But just behind them came some most eligible bachelors. They were Dennis Craft, David Blair, Harold Mason, the town preacher, James Craft, William Cook, and Lavine Fields. And the rest of the single men around, they would have quite a chance.

Next came the “happy married couples,” Wilma Day and husband, O.P. Hart and Erma Dean Collins, Velda Kincer and Ralph Day, Nina Lee Jarrett and Victor Campbell, Gwendolyn Adams and Leroy, Renavae Franklin, (of all people) and Maynard Hogg. Behind these were Wilma Williams and Ray Tolliver, Esther Hall and Earl Mohn, Betty Jo Whitson and Bill Fairchild, Valma Collins and Miles Duncil and last but not least came Dimple and Keith, the lovebirds of our high school days.

We were all gathered together gossiping as usual and in came the rest of the class. Gaynell Blair and husband (a boy from Jenkins), Delma Jean Brown, Willima Finchum, Anita White and Loretta Hall, all old maids, but as spry as usual. Next came Alice Hale and Jack Banks, who announced their engagement later in the evening. We heard a fiddle coming down the avenue and looked to find Karu Isom fiddling his way to the door.

Well, this completed our search. The class was again all together and before the

O. P. HART night was over there was plenty in the making. To close my prophecy, I will say that I have been offered a job as a dance band vocalist, my life’s ambition. Who knows, maybe someday I will find my ideal?

(The above article from the 1946 Whitesburg High School Yearbook.)

The Cannery will be open by appointment. If you will contact me at least two days before wanting to use Cannery, I will have time to get a helper and the Cannery ready for you.

Sweet potatoes are ready to can. If you have trouble in keeping them, come and can at least half of them.

Hominy and pork-beans are delicious, why not can these? We will can sausage at nine cents per pound. If you are planning to kill hogs or have meat of any kind and want to use the cannery, write or call me and I will give you the necessary information. Ann Dugan, telephone 187 Whitesburg.

The 1945 Hallowe’en Carnival brought into the PTA this year the sum of $1,700. Winners of this contest were Miss Margie Slemp as Junior Queen and Steve John as Sophomore King. First runner-up was JoNell Board and Junior Dawahare, seniors, Herbert Caudill; junior; June Maggard, sophomore; and Billie Sue Franklin and Ralph Collins, freshmen.

The crowning of the King and Queen was a fantastic and beautiful program with the court composed of lovely little flower girls and trainbearers.

The booths and concessions were kept busy entertaining the carnival crowd.