Our student body thoroughly enjoyed a performance on March 4 by magician Mr. Charles Balof. He introduced all to his outstanding world of magic. Some of the outstanding moments were the card trick where he selected a student to “read his mind”, Aladdin’s castle where he selected two students from the audience for the purpose of teaching them to be magicians. Greg Creech, a freshman, was magician Greg Gallstone for the day. Debbie Hammock, a junior, was his assistant, Miss Lovely. Greg didn’t have much luck being magician, but he did provide us with a laugh. The program was sponsored by the Southeast School Assemblies.

Kathy Carter will become an animal specialist on ducks. Darlene Caudill will open Darlene’s Discotheque in Letcher. Joy Caudill, owner of Walgreen’s, is known for her good home cookin’. Kristi will find her true love on the CB radio. He calls himself “February Man.” Alice Collins will marry Abe and they will reside in Colson in a log cabin. Linda Caudill will fulfill her life dream. She will perform on Broadway. Paul Collins becomes a famous detective who finds lost wives and daughters and keeps them. Sharon Cornett becomes the new fire chief of Whitesburg. James Dollarhide is appointed head of the Treasury Department. Future WHS Coach, Jeff Couch, coaches his football team on to a state victory. Amelia and Cecelia Day will star in Doublemint commercials. Lennie Adams makes his debut in Playgirl magazine! Eula Eldridge will become the most famous tumor surgeon in the world. She will live on the EKU campus. Roger Eldridge becomes a very famous Army general. 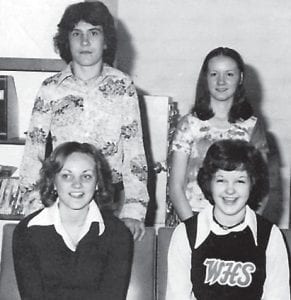 Andy Fields buys the Airport Inn in Louisville for old times’ sake and the memories. Colonel Don Fields will be the first man to walk on Pluto — and the last man to walk on Pluto! Helen Fields and Darlene Frazier will co-own Buddy’s Dine and Dance in the near future. Wendell Fields will buy Betty’s Hilltop Grocery and will become very rich! Lonnie Fleenor will become a famous comedian in Hollywood. Eddie Creech will manufacture a new brand of sunglasses . . . Hollywood Sunglasses! David Fugate will win the Mayking Mountain Motorcycle Meet in 1980. Tony Gilliam will take over his DE class and then decide to go on to bigger and better things like . . . the world! Tammy Greene will be the shortest college cheerleader in the history of America! Randy Hall manages to get on the New York basketball team . . . as a basketball! Mike Burton will become a famous sex symbol someday. Stevie Brown will work for the CIA because he never tells. Allen Flynn will be the pro-basketball coach for the famous Kentucky Team . . . the Bottom Fork Bullets. Steve Frazier will play for the Cincinnati Reds. He is famous for his jaw full of tobacco when he plays. Living in New York City, Delores Hall will become a very good ballerina. Bernadine Gibson will become a well-known hair stylist. Billie Gibson is a famous bookworm. She’ll read over one million books in her life and enjoy every minute of it.

Tim Wright (President) is the son of Annabelle Wright of Whitesburg. He is a member of the Vica Club at the vocational school. He participates in football and track. He enjoys working on cars. He plans to go to the University of Kentucky and become an architect.

Kathy Lynn Webb (Vice- President) is the daughter of Cecil and Alberta Webb of Sergent. She is a member of the D.E. Club and Pep Club. Her hobbies include motorbike riding, swimming, roller-skating, and running track.

Rhonda Maggard (Secretary) is the daughter of Bobby and Nina Maggard of Partridge. She is a member of the FHA and FBLA clubs. Rhonda is a junior representative in the homecoming.

Kathy Shackleford (Treasurer) is the daughter of Mr. and Mrs. C.H. Shackleford of Cowan. She is a member of the DE Club, and a varsity cheerleader. Her hobbies include swimming, cheering and running track.

Mike Cook (President) is the son of Maggie Cook of Colson. He is a member of the W-Club and the Pep Club. His hobbies are camping and playing all types of sports.

Kathy Osborne ( Vice- President) is the daughter of William and Catherine Osborne of Eolia. She is a member of the Pep Club. She is also a cheerleader and is the Sophomore Honor Court representative in the homecoming.

Gloria Parsons (Secretary) is the daughter Parnell and Rettie Parsons of Eolia. She is a member of the FHA and Pep clubs. Her hobby is roller-skating. At the present time, she has no future plans.

(The above articles from the 1976 Black Kat Newspapers and the 1976 Yellow Jacket Yearbook.)