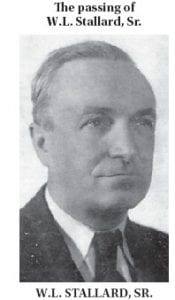 Funeral services for W. Leonard Stallard, 63, were held Monday at the First Baptist Church in Whitesburg.

Mr. Stallard, an author and teacher, died Sept. 1 at a nursing home in Tampa, Florida, after a long illness.

He was a native of Letcher County, descended from a pioneer family which came here from Dungannon, Va., four generations ago. He was born at the head of Craft’s Colly and was the son of Grant and Liza Jane Adams Stallard. He attended Hindman Settlement School and completed his high school education at Richmond. He attended Morehead State College and received his AB degree in 1936.

Mr. Stallard started teaching in the Letcher County school system when he was 18. His first school was Potters Fork. After several years of teaching, he went to work for South East Coal Company and did not return to teaching until 1928. He had taught nearly 40 years when ill health forced him to retire in 1958. 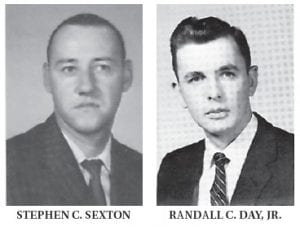 Mr. Stallard was the author of several poems and short stories about mountain people and their life. A book of poems, “The Man with the Razorback Sow,” was published in 1949, shortly before he suffered the first in a series of strokes. Several of his short stories and poems have been published in magazines. He had completed a novel about life in Letcher County, and his sons hope to have it published.

Mr. Stallard and the late James Taylor Adams of Big Laurel, Va., collaborated on some writings.

Mr. Stallard taught English, Spanish, history, bookkeeping and penmanship. After he became ill he continued to teach although he had to be carried to and from classes.

Since his illness, he had lived in Ohio and Florida as well as at his home at Ermine.

The Whitesburg High School Yearbook Staff dedicated the 1944 annual to Mr. Stallard and Miss Cleo Stamper: Dedication to Our Class Sponsors — In whom the seniors of Whitesburg High School find the help and encouragement they need to carry out their many plans; on whom they can rely for counsel and upon whose examples of good teaching they can build the characters that WHS desires in her graduates.

From the 1944 Clarion, a poem writte by Mr. Stallard entitled “Today”

Have you ever stopped to think of the value of today?

If not for today time wouldn’t be, for the past has gone to stay, and tomorrow will never come.

When is there time except today? When will today be done?

Isn’t today worth all of the past, and worth a million tomorrows?

No matter how long time may last, It holds our joys and sorrows.

Stephen C. Sexton, assistant coach and mathematics teacher at WHS, has received a grant of $4,000 from the National Science Foundation to attend the University of North Carolina during the academic year of 1961-62. Last summer he attended the University of Chattanooga under a similar grant. While at UNC he will finish the work required leading to a Master of Science Degree in mathematics.

Sexton graduated from WHS in 1952, completed his service obligation with the United States Navy, and then returned to graduate from Lincoln Memorial University in 1958. He taught one year in Springfield, Oh., before returning to his alma mater in the fall of 1959.

Sexton is the son of Mr. and Mrs. Kerney Sexton of Sandlick. He and his wife, formerly Miss Glenda Ann Brooks of Thornton, have one child, Steven Mark, four years old.

(The above article appeared in The Mountain Eagle March 2, 1961.)

Randall C. Day, Jr., a native of Dongola, is Whitesburg’s new postmaster. Day is a graduate of WHS and Berea College and has done postgraduate work at Eastern Kentucky College. He taught four years at WHS. He is an Army veteran.

Three more classrooms will become available on the Whitesburg school campus as the result of moves now in progress.

Supt. Sanford Adams told the Board of Education that the State Department of Education would not approve construction of new classrooms until existing facilities are put to best possible use. On recommendation of the state, the local school system is making the following moves:

The supply room, formerly located in the basement of the gymnasium building, is being moved to new quarters behind the maintenance shops. The bookstore, now on the first floor of the gym, will move to the former supply room, thus freeing one classroom.

The supervisor’s office, now in the English building, also will move to offices in the gym basement. The office now occupied by supervisors will become a foreign language laboratory. Equipment already has been purchased and is being installed by Salyer Radio Co.

Adams said the offices to be used in the basement have been “junked up” with stored articles and are good office space.

The state also refused to okay a proposal for a second floor to the concrete block building behind the high school but said instead an addition might be built to the English building. The addition would be between the English building and the present high school building. It might include a multi-purpose room in the basement to serve as a cafeteria and physical education room for the grade school. Adams said he hoped federal aid might be available soon enough to build a new plant for Whitesburg; he said plans are indefinite as to what buildings for Whitesburg would be constructed with federal money. But, he said, he hopes to have four new classrooms available for use next fall, and if federal aid seems too distant, other money will be used.