Moments and memories of WHS 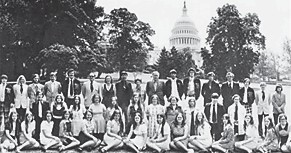 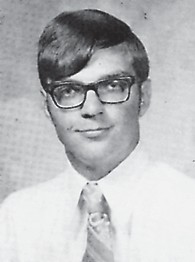 Bill Martin Collins and Rhonda Webb, co-valedictorians of the Class of 1974 for Whitesburg High School, have been given the Annual Award of the Reader’s Digest Association for students who, by their successful school work, give promise of attaining leadership in the community, it was announced today by Mr. J.M. Burkich, Principal.

Bill Martin and Rhonda will receive an honorary one-year subscription to the Reader’s Digest in any of its 13 language-editions which they choose, and a personal certificate from the editors, “in recognition of past accomplishments and in anticipation of unusual achievement to come”.

(Above article from the May 1974 Mountain Eagle) 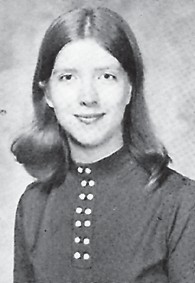 The Whitesburg High School Chapter of the Distributive Education Clubs of America (DECA) participated in the Career Development Conference held in Louisville at the Galt House Hotel, March 8-10, 1974.

Whitesburg High School held its annual Athletic Banquet on May 9, 1974. Ellis T. Johnson, of Huntington, W.Va., was the guest speaker for the evening.

Johnson was the only University of Kentucky athlete in history to win letters in four sports in a single season, football, basketball, track, and baseball. He was an All- State and All-American basketball player at Ashland High School; in 1935 he led the Kentucky Wildcats to the Southeastern Conference Championship and a National Collegiate title. He won All-American honors that year. 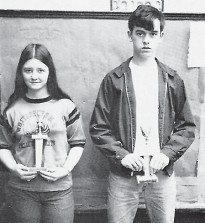 It went down to the wire — and then past it — but the Whitesburg Yellowjackets held on to score an overtime victory to claim the 53rd District A team championship over a tough team of Letcher Eagles.

The A-team final was a nip and tucker all the way through. It was tied at 16 the first quarter. Letcher was up by two at both the second and third period ends, but at the final regulation time whistle, it was 54 all. It stayed tough through the overtime, but the Jackets took advantage of several costly Eagle miscues to win the overtime 5-3, and the contest 59-57.

(This article from the March 14 Mountain Eagle)

Marion Thomas Day, son of Mrs. Anita Day Frazier, has signed a scholarship agreement with Morehead State University. A teammate, David Boggs, also signed with Morehead. Day, a senior honor student at WHS, is active in work at the Methodist Church. He has been a member of the football team for four years and has played baseball and track. He was named all Eastern Kentucky Mountain Conference in football his junior and senior years and second team, All-State, his senior year.

(This article from the March 14 Mountain Eagle)

At this organizational meeting, goals and objectives were discussed along with possible planned activities for 1974. These goals involve greater participation by the youth of Letcher County in natural resource programs. In this respect, they will serve as an added resource for the Board of Supervisors of the Letcher County Conservation District.

We students would like to thank our teachers and Mr. Jack Burkich for their cooperation in this project.

(The article from the Jan. 24 Letcher County Community

Whitesburg High School graduation exercises will be held Thursday, May 30, 1974 at 8 p.m., in the Whitesburg gymnasium. The address to 140 graduating seniors will be delivered by Lieutenant Governor Julian Morton Carroll.