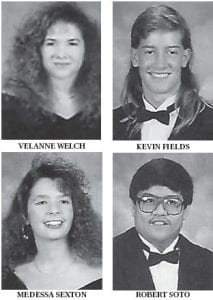 CLASS OF 1992 VALEDICTORIANS — Chris Craft’s picture was not avaiable.

Graduation for the Whitesburg High School Class of 1992 was held on Friday, May 29, at 7 p.m. in the WHS gymnasium. Graduation began with the presentation of colors by the J.R.O.T.C. and the playing of the National Anthem by the band. Armando Morrell introduced Roger Howard, who delivered the invocation. The invocation was followed by the song, “It’s So Hard to Say Good-bye to Yesterday,” sung by the WHS Chorus. Carla Stamper recognized the faculty, and Shane McDougal introduced Superintendent Jack Burkich, who then gave his remarks.

Tonya Breeding introduced the speeches of the valedictorians. “Preparation” by Robert Soto, “Obligation” by Chris Craft, “Achievement” by Kevin Fields, “Fulfillment” by Velanne Welch, and “Gratitude” by Medessa Sexton. Principal Edwin Holbrook introduced the Class of 1992 and diplomas were given to the seniors. Assistant Principal Larry Jones presented the new graduates, and James Young Jr. delivered the benediction.

Class colors, black and gold. Class flower, white rose. Class motto, “No Bird Flies If It Soars With Its Own Wings.”

Drama Club presentations: The Drama Class has provided us with much entertainment this year. For their fall performance the Drama Class presented “Up the Down Staircase,” a play about a new teacher and the hardships she faces in a large school. In the winter, the class performed “Icarus All Over,” a play directed and produced by the drama students. This play centers around a boy who is having problems with his high school prom. The class also chose to do a special play written by Belinda Mason called “Gifts of the Spirit,” which concerns the trials that people must face in their lives.

For their spring play, the class decided to put on their own production. “Blackberry Winter,” an original play written by the class, involves the elderly living in a rest home. This play was performed at Bourbon County High School for their drama class and the state board of education. The drama class had an outstanding year and should be applauded for their time, patience, and hard work.

On May 9, the Junior-Senior Prom was held in the Whitesburg High School gymnasium. The colors were red, black and gold. The theme was “Saved the Best for Last.” The night was filled with magic and excitement as couples posed for pictures and danced the night away. This year’s prom was one of the most memorable experiences of the year.

Halfway through the evening, as the tension mounted, Mr. Holbrook unfolded the paper to reveal the 1992 W.H.S. Prom King and Queen as Miss Kim Short and Mr. Kevin Fields. The race for King and Queen was considered to be the closest ever. Congratulations to Kim and Kevin.

A multitude of strange, unusual creatures seemed to have invaded the school. It was no surprise to pass by a vampire as you walked down the hall, or even to find yourself sitting beside a genie in class. No, it wasn’t a scene from a late-night horror movie or a book of fairy tales, it was Halloween at Whitesburg High School.

Many students dressed up for the Halloween Dance that was held in the gym. There were a great variety of costumes, which made the day more interesting. Among these costumes were Egyptians, cows, clowns, pirates, and even a California raisin.

A $25 prize was awarded for the best costume. This prize was won by Medessa Sexton and Manny Morrell who were dressed as ‘hippies.’ The dance was a great success, and so was Ms. Kim Hall, who told fortunes to anyone brave enough to listen.

Once again, class tournaments were held after the achievement test. Some of the school’s finest amateur athletes participated in the event. All the participants played hard and had fun. When it was all over, the senior girls were named the winners. The sophomore boys won their tournament and went on to play the faculty. With the cheering of Miss Whitaker, Mrs. Barker, Mrs. Banks, Miss Hall, and Mrs. Adams, the faculty came up with an impressive victory. “Almost Miss Yellowjacket

The 1992 Almost Miss Yellowjacket Contest was held on Wednesday. This marks the fourth annual event. Most of the lovely (ladies?) are shown being escorted by the annual staff. There were a total of 12 contestants. It was a hard decision for the judges because they all were gorgeous.

As the judges watched the lovely ladies shake their stuff, the crowd’s curiosity grew. All the boys showed off their feminine side beautifully. After all contestants were out on the court, the judges made their decision. Who would be the 1991/92 almost Miss Yellowjacket? It could be none other than Miss Buddy Mercer. Mr. Holbrook did the honors of crowning. Miss Shiloh Campbell was the first runner up and Miss James Ryan was the second runner up. All the men/ladies were lovely and each deserves an award for their feminine capabilities.

A touch of the

This year Whitesburg High School was privileged to have Wendy Cappenberg, a foreign exchange student from the Netherlands. Wendy found the United States to be very different than she expected. While staying with Jack and Karen Bates, she visited Washington, D.C., and Florida.

Wendy regrets having to leave her friends, classmates, and her second family. She will miss the many school activities, especially football games and the three proms that she attended this year. Wendy has also had her share of troubles, and informed us that she was the first foreign exchange student to have received detention — twice.