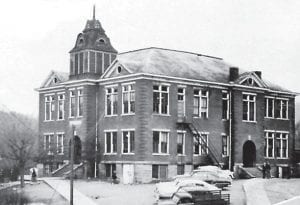 Two Letcher County students at the University of Kentucky were recently honored at the school’s annual Stars in the Night program in recognition of superior scholarship and leadership among women students on the campus.

Martha Ann Holbrook, daughter of Mr. and Mrs. Jesse S. Holbrook of Millstone, was voted the outstanding pledge of Kappa Kappa Gamma social sorority. She is a graduate of Whitesburg High School.

Wilma Fay Sumpter, daughter of Mr. and Mrs. William B. Sumpter of Partridge, was presented as a new member of Phi Upsilon Omicron, home economics honorary. Miss Sumpter is also a member of the 4-H Club; Future Homemakers of America. A graduate of Whitesburg High School, she is a senior at the university.

The Whitesburg school system is well represented at the Southeastern Music Festival, which began at Middlesboro at 8:30 this morning and continues through Saturday.

Schedule of events in which students of the school system participate is as follows.

At the junior high school gym, tenor soloist Jimmy Bert Tolliver and two trios composed of Joyce Kincer, Janis McClure, Alene Sumpter in one and Joyce Bates, Shirley Frazier and Alice Newsome in the other.

Tonight at 7 p.m. at the Central High School the following events are scheduled.

Whitesburg Girls’ Chorus composed of 65 members under the direction of Mrs. Albert Jones and the Boys’ Chorus of 38 members will perform.

Performing at the Central School on that morning will be a brass quartet, Jack Hammock, Arnold Hatton, Wade Wampler and Douglas Blair, and trombone solo by Doulas Blair. Also, a twirling ensemble.

At the library will be a clarinet quartet composed of Jimmy Bert Tolliver, Nadine Combs, Ronnie Bentley and Gloria Holstein, and a twirling corps consisting of Lenette Amburgey, Ann Cox, Barbara Holstein, Phyllis Hall, Shannon Fields, and Glenda Brooks, and an alto saxophone by Bronston Clay.

The Whitesburg band, composed of 68 members, will perform on Friday evening at 7 o’clock, and take part in the parade Saturday morning at 10 o’clock.

The All-Festival Band and chorus concert will begin at the Lincoln Memorial gymnasium at Harrogate, Tenn. at 2 p.m. Saturday.

Christmas in the air

The band presented a most colorful Christmas program in cooperation with the Rhythm Band and Ballet class. The Christmas story as told by St. Luke and St. Matthew was read by Gloria Holstein. The band, directed by Bronston Clay, responded with the familiar carols, which accompanied the text. “Deck the Halls with Bows of Holly” was sung by Nadine, Janice, Jimmy Bert and Gay Banks accompanied by Barbara. The ballet pantomime to “Silent Night” and a gay frolic to “Jingle Bells” gave a lively lift to the holiday spirit. Soloists from the band were Douglas Blair, Don Hughes, Wade Wampler, Bert Francis, Arland Hatton, Nadine Combs, Jack Hammock and Jimmy Giles. The concert was presented in the auditorium Thursday morning and Wednesday night.

(The above article from the Dec. 1951 Black Kat Newspaper.)

Dear Santa: I have been good all year waiting for this occasion, so I can ask for this one thing dear to my heart. What I think is the most wonderful gift would be the daughter of Mamma Lora and Pappy Bill Fields. She is the baby of the family and will probably be hard to get. But please, please try. J.W. Combs.

Dear Santa: For Christmas this year I only want one thing and that is J.T. Caudill. Please see if you can borrow him from the Caudill household for me. Billy Ann Whitaker.

Dear Santa: I know that I am too big to play with dolls so how about sending me a certain handsome soldier for Christmas, and I will send you an invitation to the wedding. Nadeane Amburgey.

Dear Santa: We are two lonely little girls. One of us is 17 and the other is 19. We want two certain boys. One is J.B. Noble who is 5’9” with brown hair and eyes, and the other is Douglas Roberts who is 6’ with brown hair and big blue eyes. Deliver J.B. at Mayking to Mrs. Fugate’s baby daughter and deliver Douglas to Mrs. Auton’s girl of Whitesburg. Two lonely hearts, Vina Fugate and Katherine Auton.

To become the progressive area of which it is easily capable, my community would need to make a large number of radical changes or adjustments. For example, the streets should be widened and every street should be named, and have adequate signs made for it. All streets should be paved and joined together wherever possible. My community covers enough area for a good-sized business town if only business concerns could be induced to move into them.

This community has more level or rolling land than most of the small towns around it. Hence it has plenty of space for various buildings if only a promoter could be found to start a planned program. Barbershops, a town hall, bowling alleys, or other forms of recreation are needed badly.

One of the foremost and greatest needs is a well-organized church and Sunday School. The existing churches, too, should strive for cooperation and harmony in beliefs and associations with their fellow churches.

The churches in my community should have different beliefs so that people can worship at any church, and won’t have to go three or four miles to a different church. Although my community at present has one established Sunday School, the attendance is very poor.

Juvenile delinquency and other forms of petty crimes or misdemeanors sometime occur in my community. I believe much of this could be avoided by having recreation centers or other organizations for the young people as well as for adults, for example, organizations such as Boy Scouts, Girl Scouts, and various clubs for men. A Woman’s Club has already been organized which helps the women in many ways in the making of a home, and the care of the family. There are several men in my community, who don’t belong to any club, but who would be happy to belong if such clubs were organized.

As stated above my community is greatly in need of improvement in highways and means of transportation, but no less so does it need more adequate household facilities and other modern improvements for the town as well as for the surrounding farms.

A few telephones are now in service, but the members of my community should be encouraged to have a telephone put in their homes because it adds much to a community or home.

I think the road that runs through my community has too many curves in it. The road should be better engineered. I think my community provides a very adequate place for building a tourist court for one of the places where many tourists can spend their nights while travelling near this location on Sundays and holidays.

My community needs a consolidated school that can take care of all the school children in a twomile radius.

My community needs a general hospital, one that can take care of all the people in the Letcher County coalfields. A hospital in my community would be in a good location.

My community needs all that the city has in the way of different activities.